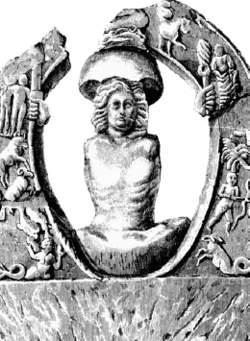 A detail of a Mithraic zodiac from an engraving, c. 1870. Reproduced by permission of Fortean Picture Library.

Mithraism was an enigmatic Hellenistic mystery religion that drew heavily on astrology and astrological symbolism. It was Christianity’s last great competitor during the period immediately prior to the official conversion of the Roman Empire to the religion of Jesus. As such, Mithraism left its mark on Christianity. For example, the Romans celebrated Mithras’s birthday (Mithras was the central deity of Mithraism) on December 25, the time of year when the daylight hours—which had gradually been shortening over the course of the previous six months—begin to lengthen, thus symbolically representing the victory of the forces of light over the forces of darkness. Christ’s birthday began to be celebrated on the same date so that Christianity could compete more effectively with Mithraism.

Although Mithraism left a rich heritage of temple art and architecture for archaeologists to uncover, the actual doctrines of Mithraism were not preserved. In the late nineteenth century, the Belgian scholar Franz Cumont put forward a convincing hypothesis about these doctrines that held sway in Mithraic studies for the next 70 years. Beginning with the similarity in name between Mithras and the Persian god Mithra, Cumont developed an explanation that portrayed Mithraism as a form of Zoroastrianism that had branched off and transformed into a mystery religion. If this initial premise is granted, it is then possible to find other Persian myths, often quite obscure, that seem to apply to most of the sculpted forms found in Mithraic sanctuaries (Mithraeum). There were certain problems, however, with Cumont’s interpretation—problems that came to a head in 1971 at the First International Conference of Mithraic Studies. At this meeting, devastating critiques were leveled against Cumont’s Iranian (Persian) hypothesis. These critiques opened the door for entirely new interpretive approaches.

Freed from the “conventional wisdom” about the meaning of Mithraic statuary, scholars were able to look at Mithras imagery with fresh eyes, and one of the first things they noted was that many of the figures surrounding the tauroctony (the bull-slaying scene that is the central motif in every Mithraeum) seemed to compose a star map of certain constellations. This impression was reinforced by the zodiacal wheels found in many sanctuaries. With these clues as a starting point, contemporary scholars gradually pieced together a picture of a mystery cult that arose out of the religious speculations of a group of astrologically inclined Stoic philosophers in Tarsus (the birthplace of Saint Paul).

David Ulansey, in his Origins of the Mithraic Mysteries, has convincingly proposed that this group of philosophers responded to the discovery of the precession of equinoxes by postulating that a previously unknown god was responsible for the gradual movement of Earth’s axis (the stars and planets, which were now relegated to positions of lesser importance, had earlier been identified by the Stoics as gods who controlled human fate). This new god, who was clearly more powerful than all the other gods in the heavens because he controlled the very axis of the universe, was linked by these Stoics with the chief local deity, Sandan, who had earlier been identified with the Greek hero Perseus, as well as with the Persian Mithra (hence the name Mithras).

The link between Sandan/Mithras and Perseus is an important key to unlocking the meaning of the tauroctony. In his constellation, Perseus is pictured with an upheld knife and is located immediately above the constellation Taurus. It is thus not difficult to imagine the scene in the star map as leading to the scene in the tauroctony, in which the knife is plunged into the bull. What, however, is the significance of this sacrifice?

Several thousand years ago—during the period when Mithraism emerged—the Sun was positioned at the beginning of the constellation Aries during the spring equinox. Because of the precession of equinoxes, the spring equinox moves slowly backward through the constellations of the zodiac, so that approximately every 2,000 years the equinox begins taking place in an earlier constellation. It has been occurring in Pisces for the past 2,000 years and will begin to occur in the constellation Aquarius in the near future (which is the background for current speculations about the so-called Age of Aquarius). This also means that the spring equinox occurred in the sign Taurus several thousand years prior to the Hellenistic period. Ulansey takes this information and postulates that the tauroctony represented Mithras’s destruction of the earlier Age of Taurus.

Ulansey’s theory is far more intricate, and his argument far more nuanced, than can be developed here. The theory also leaves some questions unanswered: How did a religion originally devised by a group of intellectuals in Tarsus become one of the most popular religions of the Roman Empire? What did the rituals and other concrete practices of Mithraism actually involve? How did Mithraism change over time? Even though these questions are not addressed, and although many particulars of Ulansey’s analysis are open to criticism, the starting place of his discussion—that much of Mithraism’s core symbolism is astrological and related to the precession of equinoxes—can be regarded as firmly established.

Ulansey, David. The Origins of the Mithraic Mysteries: Cosmology and Salvation in the Ancient World. New York: Oxford, 1989.