either of two electronic devices in which two or more signals are combined. In the type of mixer used in radio receivers, radar receivers, and similar systems, a signal is translated upward or downward in frequency. The basic property of such a device is that its output is not directly proportional to its input, but to the product of its inputs; when signals of different frequencies are applied to such a device, the output contains not only the original frequencies but also frequencies equal to the sum and difference of the original frequencies. Desired components in the output can be separated from the others by a suitable filter, and any modulationmodulation,
in communications, process in which some characteristic of a wave (the carrier wave) is made to vary in accordance with an information-bearing signal wave (the modulating wave); demodulation is the process by which the original signal is recovered from the wave
..... Click the link for more information.  present on one of the input signals is preserved on the output. In the type of mixer used, for example, to combine the outputs of several microphones into a single channel, several signals are combined to produce an output proportional to their sum. Each of the input signals usually passes through a potentiometerpotentiometer.
1 Manually adjustable, variable, electrical resistor. It has a resistance element that is attached to the circuit by three contacts, or terminals. The ends of the resistance element are attached to two input voltage conductors of the circuit, and the third
..... Click the link for more information.  or similar control that fixes its relative level in the output. Signals can also be mixed using digital techniques.
The Columbia Electronic Encyclopedia™ Copyright © 2013, Columbia University Press. Licensed from Columbia University Press. All rights reserved. www.cc.columbia.edu/cu/cup/
The following article is from The Great Soviet Encyclopedia (1979). It might be outdated or ideologically biased.

(in metallurgy), a container for collecting molten pig iron discharged from blast furnaces before further treatment in the molten state in steel-smelting units. Mixers were first introduced in 1889 by the American metallurgist W. R. Jones.

Mixers make possible continuous operation of steel foundries. Equilibration of the chemical composition and temperature of the pig iron takes place in mixers. In addition, in active mixers the pig iron is heated, and a number of impurities (mainly sulfur) are partially removed.

The cylindrical or barrel-shaped housing of a mixer, which is mounted on a frame, is made of plate steel and lined with fire-brick; it has a neck for receiving the pig iron from the ladles and a spout for pouring off the pig iron into the ladle when the mixer is tipped by a special mechanism. The most common mixers in the USSR have a capacity of 1,300 tons.

in agriculture, a machine that mixes different feeds and prepares poisoned bait and bulk peat-humus.mixtures.

Feed mixers may be classified in various ways: according to the type of feed (dry or wet), according to the operating principle (continuous or batch operation), or according to the design of the working element (auger, blade, drum, or propeller mixers). Other types may use horizontal or vertical shafts.

The USSR produces continuous-action mixers with screw and combination working elements for mixing dry feeds. These mixers operate in combination with dosing units that supply the mixed feeds in designated proportions and transporting mechanisms that carry the initial components and the finished mixture. The working elements of the screw mixer are either screws of various shapes or a shaft with short blades. As they rotate inside a closed trough, the screws or shaft mix the feeds vigorously and move the prepared mixture toward the outlet hatch. Moist and semiliquid feed mixtures are prepared in mixers equipped with steam-conducting collectors that supply steam to a mixing chamber (Figure 1). In these mixers the feed mixture is subjected to heat treatment (steaming) as it is mixed. The working elements are driven by an electric motor.

Poisoned bait mixers (Figure 2) prepare poisoned mixtures from grain, zinc phosphide, and oil. Such mixtures are used to control susliks, small rodents, and harmful insects. The grain passes from a bin through a dosing device into the trough of an auger mixer. The oil flows from a tank through a regulating 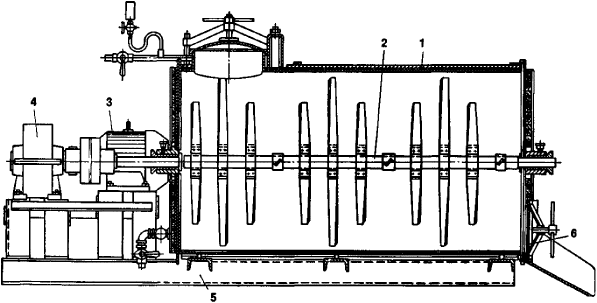 valve and moistens the grain; and the auger then mixes the grain and the oil. The poison is applied to the moistened grain, and the entire mass is mixed again by the auger. The prepared bait is then poured into containers. The working elements are driven by a 3-kilowatt electric motor. 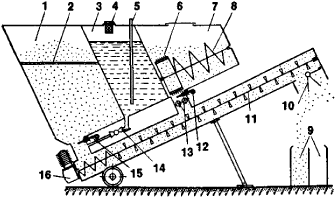 The bulk peat-humus mixer prepares a mixture of peat, humus, and other components, which is used in potting seedlings of agricultural crops, such as vegetables and melons. This unit has a mixing chamber with an auger, into which the initial components and water are fed, and an unloading device. It is usually operated in combination with a seedling pot machine. The working parts are driven by a 2.8-kilowatt electric motor.

(1) A machine for mixing various substances to the required degree of homogeneity. Examples include asphalt and concrete mixers, mortar mixers, and mixers used in agriculture.

(3) A device with several inputs and a common output, used for mixing several electrical signals. Such mixers are often used in broadcasting and sound recording. They make it possible to mix signals received from several microphones and to obtain a mixture of sounds, for instance, speech against a background of music.

[′mik·sər]
(electronics)
A device having two or more inputs, usually adjustable, and a common output; used to combine separate audio or video signals linearly in desired proportions to produce an output signal.
The stage in a superheterodyne receiver in which the incoming modulated radio-frequency signal is combined with the signal of a local r-f oscillator to produce a modulated intermediate-frequency signal. Also known as first detector; heterodyne modulator; mixer-first detector.
(optics)
A nonlinear device in which two light beams are combined to form new beams having frequencies equal to the sum or the difference of the input wavelengths.
McGraw-Hill Dictionary of Scientific & Technical Terms, 6E, Copyright © 2003 by The McGraw-Hill Companies, Inc.

Linear mixing is the process of combining signals additively, such as the summing of audio signals in a recording studio. This operation can be accomplished passively by simply using a resistive summing network. Although this approach appears very economical, there is a loss in signal strength and an interaction of the signal amplitudes as the gains are adjusted.

Perhaps the most familiar application of nonlinear mixers is in radio and television receivers. They are widely used in such applications as amplitude modulation (AM) and demodulation, frequency demodulation, phase detection, frequency multiplication, and single-sideband (SSB) generation. The incoming information to a receiver has been transmitted and received at a frequency far too high to permit efficient amplification and processing. Therefore the signal is translated or frequency-shifted or heterodyned by a mixer to a lower frequency, known as the intermediate frequency (IF), where amplification and processing are performed efficiently by an IF processor, sometimes referred to as the IF strip. See Amplitude-modulation detector, Amplitude modulator, Frequency-modulation detector, Frequency modulator

A second application of a nonlinear mixer is frequency synthesis, where a stable but not easily changed signal at a high frequency is made tunable by mixing it with an easily tunable signal at a low frequency, which, perhaps, can be varied in precise increments of any size. The utility of the method is limited by the ability to filter or separate one frequency term from another, thereby determining the minimum practical value of low frequency for the application.

A machine employed for blending the constituents of concrete, grout, mortar, or paint.
McGraw-Hill Dictionary of Architecture and Construction. Copyright © 2003 by McGraw-Hill Companies, Inc.

Electronics a device in which two or more input signals are combined to give a single output signal
Collins Discovery Encyclopedia, 1st edition © HarperCollins Publishers 2005

Feedback
Flashcards & Bookmarks ?
Please log in or register to use Flashcards and Bookmarks. You can also log in with
Flashcards ?
My bookmarks ?
+ Add current page to bookmarks
Mentioned in ?
References in periodicals archive ?
This in turn evokes a look at the mixer, in-situ, at any given point in time.
Footprinting: a means to achieve the quality objective in batch mixing
Ebarle said he agreed to turn over the mixer to Castilla after the judge threatened him with arrest.
Judge threatens arrest over cement mixer
There are many types of distributive mixers, and their selection depends on the properties of what is to be mixed, the proportions of each component, and the screw L/D.
Barrier screws and mixers: for some reason, there are a lot of barrier screws in operation with high-shear mixers, when a distributive mixer is usually a better choice
In operation, dry ingredients are loaded through the mixer inlet (or inlets) until they fill from 10 to 90 percent of the mixer's gross volume, depending on the application.
SLM Machinery Develop New Vertical Ribbon Mixer Improves Mixing Homogeneity
Dinnissen's special Energy Control Programme makes it possible to reduce energy consumption by 60 per cent compared to traditional ribbon mixers,
500th machine and still going strong
A Air incorporation or splashing can always be a problem with vigorous mixing, a surface vortex or operating the mixer while filling or emptying the tank.
Tip portable mixers in your favor: five tips on how to make the best use of your portable mixers
The silo mixers also include a star-burst bag splitter to easily open mortar bags during bag batches.
Stone stirs up new batch of mixers
Dependable manufactures both twin-screw turbo head mixers and zero-retention single-screw mixers in addition to mixers of other designs.
Continuous mixer takes on performance, serviceability challenge
Each of these mixers is fabricated using a reliable, mature and production-qualified GaAs MESFET process.
GaAs MMIC I/Q mixers for IRM and SSB converters in microwave radio applications
These days, consumers understand that a stand mixer should be an investment purchase, and as such, is expected to last a lifetime.
Stand mixers
Although a static mixer generally gives consistent results, there are some important variables that can affect its performance.
Selection guidelines for static mixers. (Adhesives & Tapes)
Many low speed mixing applications could be performed substantially better with a high shear mixer, and likewise many batch operations with intank mixers could be better suited to a continuous inline operation using inline mixers, of any variety discussed above.
Admix Inc.: improve and increase production with inline mixing and milling. (2003 Corporate Profiles)