see salamandersalamander,
an amphibian of the order Urodela, or Caudata. Salamanders have tails and small, weak limbs; superficially they resemble the unrelated lizards (which are reptiles), but they are easily distinguished by their lack of scales and claws, and by their moist, usually
..... Click the link for more information. .

(sī`rən), in Greek mythology, one of three sea nymphs, usually represented with the head of a woman and the body of a bird. Daughters of PhorcusPhorcus
, in Greek mythology, sea god, son of Pontus and Gaea. He married his sister Ceto, who bore him a brood of monsters, including the Gorgons, the Graeae, Scylla, and the Sirens.
..... Click the link for more information.  or of AchelousAchelous
, in Greek mythology, river god; son of Oceanus and Tethys. He possessed the power to appear as a bull, a serpent, or a bullheaded man. Hercules defeated him and broke off one of his horns, which, according to one legend, became the cornucopia.
..... Click the link for more information. , the Sirens inhabited an island surrounded by dangerous rocks. They sang so enchantingly that all who heard were drawn near and shipwrecked. Jason and the Argonauts were saved from them by the music of Orpheus, whose songs were lovelier. Odysseus escaped them by having himself tied securely to a mast and by stopping the ears of his men.
The Columbia Electronic Encyclopedia™ Copyright © 2013, Columbia University Press. Licensed from Columbia University Press. All rights reserved. www.cc.columbia.edu/cu/cup/
The following article is from The Great Soviet Encyclopedia (1979). It might be outdated or ideologically biased.

in ancient Greek mythology, a half-bird, half-woman. According to Homer’s Odyssey, the sirens used their enchanting voices to lure sailors to rocky shores, against which the sailors’ ships were smashed. In order to save his ship, Odysseus stopped his companions’ ears with wax and ordered himself tied to the mast. Similarly, Orpheus’ persuasive voice overcame the allure of the sirens and saved the Argonauts from death.

The ancient Greeks also believed that the sirens were associated with an underground kingdom, and as a result, the sirens were often depicted on gravestones. The most common type of sirens in ancient Greek art were creatures with the head and chest of a woman and the body of a bird. Figuratively, the term “siren” refers to a beautiful and seductive woman with an enchanting voice.

an acoustic radiator whose operation is based on the periodic interruption of a stream of gas or liquid. Liquid sirens do not differ in principle from gas sirens, but they are used comparatively rarely because of the difficulty in designing a mechanism for radiation into a medium with a high acoustic resistance.

Sirens are classified according to the principle of operation as dynamic (rotating) and pulsating. Dynamic sirens are the most widely used type and are subdivided into axial and radial sirens (Figure 1). In an axial siren the air stream coincides with the axis of rotation; in a radial siren the air stream is directed along a radius perpendicular to the axis. In axial sirens a perforated disk—the rotor—rotates relative to a stationary disk—the stator. In radial sirens the rotor and the stator are two coaxial, usually cylindrical, surfaces. The rotor is rotated by an electric motor or by a small gas turbine. Air from a chamber enters under pressure through the apertures in the rotor and stator and is periodically interrupted. The frequency of air pulsations f is determined by the number of apertures in the rotor or stator m and by the number of rotor revolutions per minute N:f= mN/60 hertz (Hz). The frequency f is the fundamental frequency in the sound spectrum being radiated by the siren. The frequency range of sirens used in actual practice ranges from 200-300 Hz to 80-100 kilohertz (kHz); however, some sirens operate at frequencies up to 600 kHz. The power rating of a siren may be as high as tens of kilowatts. 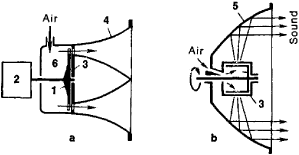 Dynamic air sirens are used for signaling, as in alarm and signal sirens, and for various technological purposes, including the coagulation of finely dispersed aerosols, defoaming, the precipitation of fogs, and the acceleration of heat-exchange and mass-exchange processes.

[′sī·rən]
(engineering acoustics)
An apparatus for generating sound by the mechanical interruption of the flow of fluid (usually air) by a perforated disk or cylinder.
McGraw-Hill Dictionary of Scientific & Technical Terms, 6E, Copyright © 2003 by The McGraw-Hill Companies, Inc.

1. a device for emitting a loud wailing sound, esp as a warning or signal, typically consisting of a rotating perforated metal drum through which air or steam is passed under pressure
2. Greek myth one of several sea nymphs whose seductive singing was believed to lure sailors to destruction on the rocks the nymphs inhabited
3. any aquatic eel-like salamander of the North American family Sirenidae, having external gills, no hind limbs, and reduced forelimbs
Collins Discovery Encyclopedia, 1st edition © HarperCollins Publishers 2005