the name given to eight—and by the end of the Renaissance, to 12—modes, which formed the basis of the music—primarily church music—composed in Western Europe during the Middle Ages. The medieval modes were also used in the polyphonic music of the Renaissance. In the notation of medieval modes, an ordinal number originally served to designate a pair of medieval modes that combined an authentic and a plagal mode; later, an ordinal number was used for each mode. The names of the ancient Greek modes were used; the scale to which they referred were already different (Figure 1).

The basic components of the medieval modes were the final (the end tone), the ambitus (compass of the scale), and, in the melodies used for chants, the dominant (the repeating tone used in chants, marked in notation by a white note in the middle of the mode’s range). Each of the medieval modes had its own characteristic, formulaic melodies. 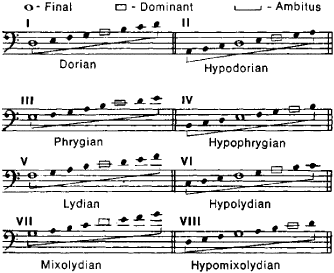 Other modes apparently existed in the secular and folk music of the Middle Ages and the Renaissance. However, they were disregarded by official musical theory, which was controlled by the church. Only in the mid-16th century were four more modes added to the system of medieval modes (Figure 2).

A particular kind of expressiveness was ascribed to each of the medieval modes.