interaction between electrically neutral molecules or atoms; it determines the existence of liquids and molecular crystals and the difference between real and ideal gases and is manifested in various physical phenomena. Molecular interaction depends on the distance r between the molecules and usually is described by the potential energy of interaction U(r), the intermolecular potential, since it is precisely the average interaction potential that determines the state of matter and many of its properties.

Molecular interaction was first taken into consideration by J. D. van der Waals (1873) in explaining the properties of real gases and liquids. He proposed that at small intermolecular distances r there exist forces of repulsion, which with increasing distance are replaced by forces of attraction. On the basis of these concepts, without even considering the quantitative dependence of molecular interaction on distance, he derived the van der Waals equation for the state of a real gas.

Molecular interaction is electrical in nature and consists of forces of attractive forces (orientation, induction, and dispersion forces) and repulsive forces.

In this case the energy of molecular interaction is proportional to the dipole moment pi of the polar molecule and the polarizability a 2, which characterizes the ease with which the other molecule can be polarized: Uind(r) ˜ P1α2/r6. This energy is called the induction energy, since it appears as a result of the molecular polarization induced by electrostatic induction. Induction forces (Find ˜ r—7) also act between polar molecules.

Forces of repulsion act between molecules at very small distances, where the filled electron shells of the atoms making up the molecules come into contact. The Pauli exclusion principle in quantum mechanics prohibits the interpenetration of filled electron shells. The repulsive forces that arise here are more dependent on the molecular types than are the attractive forces. The assumption that the potential energy of the repulsive forces Urep increases with decreasing distance according to the law Urep (r) ˜ r-12, and Frep ˜ r-13, leads to good agreement with experimental data.

If we assume that U(r) = 0 as r — ∞ and that the energy of attraction varies with distance as r-6 and the energy of repulsion as r-12, then the U(r) curve will have the shape depicted in Figure 2. The distance at which the forces of interaction of the molecules are equal to zero corresponds to the minimum of the potential energy curve. 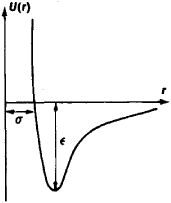 It is impossible in practice to calculate U(r) with high accuracy on the basis of quantum mechanics for the great diversity of possible pairs of interacting molecules. Neither has it yet been possible to measure experimentally the force of interaction at intermolecular distances. Therefore, a formula for U(r) is usually selected in such a way that the calculations made with it are in good accord with experiment. The formula

called the Lennard-Jones potential, is most often used. The quantities cr and € in the formula are determined experimentally on the basis of the dependence on cr and € of the properties of the substance (for example, the diffusion coefficient, thermal conductivity, or viscosity).

Feedback
Flashcards & Bookmarks ?
Please log in or register to use Flashcards and Bookmarks. You can also log in with
Flashcards ?
My bookmarks ?
+ Add current page to bookmarks
Mentioned in ?
References in periodicals archive ?
[[Epsilon].sub.ij] = Molecular interaction energy between a segment of molecule i and a segment of molecule j, kJ/kmol.
Phase behavior of polyurethane precursors
Lafuente, Study of weak molecular interactions through thermodynamic mixing properties, J.
Study of Volumetric, Viscometric and Thermodynamics Behavior of Binary and Ternary Systems for 2,5 Hexandione with Some Alcohol Cyclic at Different Temperatures
Increase in the value of relaxation time and ultrasonic absorption with concentration can be explained in terms of the motion of the molecular interaction forces.
Molecular Association Studies on Polyvinyl Alcohol at Different Concentrations
Nevertheless, we attempted to calculate the molecular interaction energies keeping in mind that the results are only indicative and that the actual values must be handled with caution.
The effect of hydroxyl moieties and their oxosubstitution on bile acid association studied in floating monolayers
Furthermore, there is no molecular interaction study performed computationally to establish the conformational changes and reveal the binding domains of A[beta]42 and ectodomain of p75NTR receptor.
Computational studies of beta amyloid (a[beta]42) with p75NTR receptor: a novel therapeutic target in Alzheimer's disease
Initium has developed and launched molecular interaction analysis systems that are simple and easy-to-use, since it was established.
INITIUM Launch a New Model of QCM Molecular Interaction Analyzer 'AFFINIX Q8'
Experts fromCardiffUniversityand Kings College Londonworked together to isolate a T-cell from a patient with Type 1 diabetes to view a unique molecular interaction, which results in the killing of insulin-producing cells in the pancreas.
Can boffins' breakthrough halt diabetes? University researchers in landmark discovery
Other chapters describe chromatography as more than a method of separation, but as a unified science; profiles of early pioneers and builders, Nobel Prize awardees, and their research; the multiple branches of the field; advances in column technology and its validation; key institutions; using chromatographic separations as molecular interaction amplifiers; and the future of the field and its contributions in systems biology, genomics, and proteomics.
Chromatography; a science of discovery
The ratios of the components that define the samples were chosen to ensure sufficient molecular interaction while keeping the soy protein in great excess.
Investigations of the molecular interactions of soy-based adhesives
This paper deals with the structure of the molecular interaction as studied by X-ray crystallography and fluorescence anisotropy, of the RXR binding domain with a rexinoid agonist (CD3254, see below, and its analogues).
Modulators of the structural dynamics of the retinoid X receptor to reveal receptor function
Simulations observe the behavior of a model system in a given thermodynamic state under atomic and/or molecular interaction rules (electron wave functions and/or force fields), which are given by the programmer to approximate the real interactions.
Through measurement to knowledge: the inaugural lecture of Heike Kamerlingh Onnes (1882)