directed flows of molecules or atoms that move in a vacuum virtually without collisions with one another or with molecules of residual gases. Molecular and atomic beams make it possible to study the properties of individual particles, disregarding the effects caused by collisions, except in cases where the collisions themselves are the object of study.

The first experiment with an atomic beam was conducted in 1911 by the French scientist L. Dunoyer, who demonstrated the rectilinear flight of sodium atoms in a vacuum. The experiments were continued by O. Stern and his colleagues in Hamburg (1929), using molecular and atomic beams to measure the velocity of molecules and their mutual collision cross sections and to study phenomena caused by electron spin and the magnetic moments of atomic nuclei. In 1937, I. Rabi used the molecular beam resonance method that he invented, which at first was used to measure nuclear magnetic moments (1937-4-0) but subsequently became the basic method of radio spectroscopy, making possible highly accurate measurement of the fundamental characteristics of molecules, atoms, and atomic nuclei (N. Ramsey and others).

Molecular interaction. In contrast to chemical and gas-dynamic methods, in which only averaged effects are observed (because of the multiple collisions of particles), the technique of molecular and atomic beams makes possible detailed study of a collision event between two particles.

In some experiments the mutual cross sections of elastic and inelastic collisions of particles moving at different angles with different speeds are measured; in others, chemical reactions between particles are observed and the angular and energy distribution of the reaction products is studied (Lester, 1971; J. Ross, 1966; R. J. Gordon, 1971). A typical experiment of the second type is illustrated in Figure 1. Hydrogen atoms emerge from the source into the vacuum chamber, where they collide with diatomic molecules of an alkali metal, such as K2. The angular distribution of the reaction products is measured by surface ionization detectors (heated platinum and tungsten filaments). Since a tungsten detector is equally sensitive to particles of K2 and KOH and a platinum detector is less sensitive to KOH, then the molecules may be distinguished by combining the two. Molecular and atomic beams are sometimes previously polarized or, on the contrary, the polarization that appears may be measured. The excitation of vibrational energy levels in reaction products is studied in some experiments. 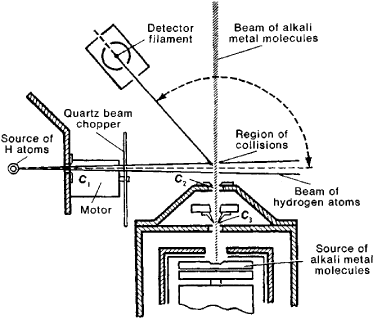 Figure 1. Diagram of an experiment for studying the chemical reactions that take place upon crossing of a beam of hydrogen atoms and a beam of diatomic molecules of an alkali metal: (C,), (C2), and (C3) collimating slits

Resonance experiments (the Rabi method). As the particles emerge from the source into a vacuum (at 13.3 millinewtons per sq m, or 10−7 mm Hg), they pass through a nonuniform magnetic field generated by magnet A (Figure 2). The nonuniform field of A curves their trajectories because of the interaction of their magnetic moments with the nonuniform magnetic field. The particles subsequently pass through the collimator and strike the region of the detector, where the nonuniform magnetic field generated by magnet B compensates for the curvature of the trajectory. The configuration of the field of B is exactly opposite that of A. The molecules are identified by electron bombardment ionization and are passed through a mass spectrometer and then recorded by an electron multiplier tube attached to a phase-sensitive detector. By smoothly varying the frequency of oscillation v of the electromagnetic field in the gap of magnet C, which generates a uniform magnetic field, the intensity of the beam recorded by the detector may be measured. If the frequency v satisfies Bohr’s condition

Figure 2. Diagram of an experiment for observing magnetic- resonance in a molecular beam. The path of the particle through the device is determined by the curvature of its trajectory; the deflections are magnified with respect to the typical dimensions of the instrument (length, 3 m; maximum cross section, 0.01 cm):(R) resonator in which an electromagnetic field of the resonance frequency is excited, (Pi) fore pump, (P2) high-vacuum pump, (A), (8), and (C) electromagnets.

If state ℰ1 differs from state ℰ2 in its magnetic properties, after the transition of a molecule field B usually compensates for the deflection induced by field A, but not for all molecules in the beam; some of the molecules that have undergone theℰ1 ’ ℰ2 transition move in the trajectory indicated by the broken line (Figure 2). When condition (1) is satisfied, the intensity recorded by the detector is at a minimum. A plot of the dependence of intensity on frequency is the radio-frequency spectrum of the particles. If the resonance frequency is known from condition (1), the energy levels of the molecules can be determined.

The method of electric resonance is analogous to the method of magnetic resonance, with the exception that changes in the trajectory are caused by the interaction of the electric moments of the molecules with the inhomogeneous electric fields, and the quantum transitions between them are induced by oscillations of the electric field in the resonator. The beam intensity can be increased by using four-pole or six-pole electrodes, which provide space focusing of the beam. A combination of both methods is also used—for example, a uniform static electric field is used in experiments with magnetic resonance, and a uniform magnetic field is used in experiments with electric resonance (K. Mac Adam and N. Ramsey, 1972).

Experiments with magnetic and electric resonance in molecular and atomic beams have yielded a great deal of information on the structure of molecules, atoms, and atomic nuclei. The nuclear spins and the magnetic and electric quadrupole moments of many stable and radioactive nuclei have been measured by this method. In particular, the electric quadrupole moment of the deuteron was discovered, indicating for the first time the existence of tensor forces between elementary particles. The fine structure of atomic spectra was measured with high accuracy by this method. As a result, Lamb shift was discovered in experiments with atomic hydrogen, giving impetus to a series of revolutionary theoretical developments in quantum electrodynamics. Measurements of the hyperfine structure of spectra provided the first indications of the anomalousness of the magnetic moment of the electron, which subsequently was measured directly. In experiments with molecular and atomic beams, two independent measurements of the fine structure constant have been made, and the only proof to date of the existence of electric octupole moments in nuclei was given. Resonance experiments with molecular and atomic beams have made possible measurement of the rotational magnetic moments and electric dipole moments of molecules, the interaction energy of the nuclear magnetic moments with the rotational magnetic moments of molecules, and the dependence of electrical and magnetic properties on molecular orientation, and determination of the quadrupole moments of molecules and the energy of nuclear magnetic interactions in molecules. The oscillation frequency that corresponds to the lines of magnetic resonance hyperfine structure in molecular and atomic beams is the basis for the definition of the second in passive frequency standards.

The possibility of using nonuniform electric or magnetic fields to produce space focusing of molecular and atomic beams containing particles in certain energy states has made possible the use of molecular and atomic beams to accumulate particles in higher energy states (that is, to create a population inversion). This is required for the maser. The first maser was designed for a beam of ammonia molecules. An atomic beam hydrogen maser was widely used both to study the hydrogen atom and to create an active quantum frequency standard.