Well-directed streams of atoms or molecules in vacuum. Utilization of molecular beams is a cornerstone technique in the investigation of molecular structure and interactions. Molecular beams are usually formed at sufficiently low particle density for the interaction of one beam molecule with another to be negligible. This ensemble of truly isolated molecules is available for the spectroscopic study of molecular energy levels using photon probes from the radio-frequency to optical portions of the electromagnetic spectrum. Some of the best-determined fundamental knowledge of physics comes from spectroscopic molecular-beam experiments. Beyond this, beams can be applied as probes of the multifaceted nature of gases, plasmas, surfaces, and even the structure of solids. An application intermediate in complexity is the study of molecular interactions by means of two colliding beams, where one might be a beam of charged particles such as ions or electrons. See Scattering experiments (atoms and molecules)

One simple means of forming a beam is to permit gas from an enclosed chamber to escape through a small orifice into a second chamber maintained at high vacuum by means of large pumps (illus. a). A useful number of molecules passes forward along the horizontal axis of the apparatus. A well-collimated beam is then formed by requiring that those molecules entering the test chamber where an experiment is to be performed pass not only through the orifice but also through a second small hole separating the collimating and test chambers. 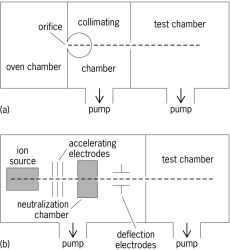 If higher velocities are desired, a charge-exchange beam system can be used. In this scheme (illus. b), ions are produced by some ionizing process such as electron impact on atoms within a gas discharge. Since the ions are electrically charged, they can be accelerated to the desired velocity and focused into a beam using electric or magnetic fields. The last step in neutrally charged beam formation is to pass the ions through a neutralizing gas where electrons from the gas molecules are transferred to the beam ions in charge-exchange molecular collisions. See Ion sources

Much of molecular spectroscopy involves the absorption or emission of light by molecules in a gas sample. The frequency of the light photon is proportional to the separation of molecular energy levels involved in the spectroscopic transition. However, the molecule density in typical gas samples is so high that the energy levels are slightly altered by collisions between molecules, with the transition frequency no longer characteristic of the free molecule. The use of low-density molecular beams with their sensitive detection techniques can reduce this collision alteration problem, with the result that atomic properties can be measured to accuracies of parts per million or even better. If the very simplest atoms or molecules are employed, the basic electromagnetic interactions holding the component electrons and nuclei together can be precisely studied. This is of great importance to fundamental physics, since theoretical understanding of electromagnetic interactions through quantum electrodynamics represents the most successful application of quantum field theory to elementary particle physics problems. See Quantum electrodynamics, Quantum field theory

The development of tunable, strong laser sources of single-frequency light beams has added another dimension to molecular-beam experiments. With laser radiation resonantly tuned to excite a molecule from its normal ground state to one of its infinite number of vibrationally, rotationally, and electronically excited states, the number of possible studies and applications of excited molecular beams becomes enormous. See Laser spectroscopy, Molecular structure and spectra, Nuclear structure

Feedback
Flashcards & Bookmarks ?
Please log in or register to use Flashcards and Bookmarks. You can also log in with
Flashcards ?
My bookmarks ?
+ Add current page to bookmarks
Mentioned in ?
References in periodicals archive ?
[5] Ramsey N (1956) Molecular Beams (Clarendon Press, Oxford).
A Historical Review of U.S. Contributions to the Atomic Redefinition of the SI Second in 1967
Consequently, the most detailed studies of bimolecular reactions employ crossed atomic and molecular beams in vacuum.
Visualization of chemical reaction dynamics: toward understanding complex polyatomic reactions
At Columbia [University], people were using atomic and molecular beams to separate various energy states.
Charles Townes: laser pioneer reflects on making Einstein's idea real
The UH Manoa team, including Xibin Gu and Seol Kim, conducted simulation experiments mimicking the chemical reactions in Titan's atmosphere utilizing crossed molecular beams in which the consequence of a single collision between molecules can be followed.
Scientists unravel chemistry of Titan's hazy atmosphere
This problem can be solved by using the technique of application of coatings by reflected molecular beams. So, in [3] the method of application of a coating by the molecular beam reflected from the concave screen, is proposed.
Electron beam method of graphite evaporation and production of condensates free from tungsten impurities
Other sections present work on direct numerical solution of the Boltzmann equation, microflows, granular gases, molecular beams, and gas phase molecular collision dynamics.
Rarefied gas dynamics; proceedings. (CD-ROM included)
Specific sources of gas, often in the form of molecular beams, and specific gas sinks need to be considered and analyzed.
Solving process problems at the molecular flux level: working from pressure readings alone can mislead and misdirect a search for process problems, but reaching down a layer further into the molecular. flux level can provide real solutions
The magnetic properties of atoms and molecules had been determined by the studies of molecular beams undertaken by Stern (see 1933) and by Rabi (see 1938).
Magnetic moments
Film growth is produced by molecular beams, eminating from effusion cells, impinging on a heated wafer.
MMIC production using MBE: present and future
Ramsey, Molecular Beams, Oxford University Press (1956).
A Ramsey's method with pulsed neutrons for a T-violation experiment