[′mō·mənt əv ′fȯrs]
(mechanics)
torque
McGraw-Hill Dictionary of Scientific & Technical Terms, 6E, Copyright © 2003 by The McGraw-Hill Companies, Inc.
The following article is from The Great Soviet Encyclopedia (1979). It might be outdated or ideologically biased.

The moment of a force about a center O is a vector quantity. The magnitude of the moment is MO = Fh, where F is the force and h is the arm, that is, the length of the perpendicular drawn from O to the line of action of the force (see Figure 1); the vector MO is perpendicular to the plane that contains the center O and the force F and is pointed in a direction such that the rotation caused by the force appears counterclockwise (in a right-handed coordinate system). The moment of a force is expressed as a vector product, by the equation MO = [rF], where r is the radius vector drawn from O to the point of application 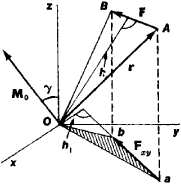 The plus sign in this expression is selected when the rotation caused by the force F is counterclockwise when viewed from the positive end of the z-axis (also in a right-handed system). The moments of a force about the x-, y-, and z-axes can also be calculated from the formulas

where Fx, Fy, and Fz are the projections of the force F on the axes; x,y, and z are the coordinates of the point A of application of the force.

If a system of forces has a resultant, then the moment of the system is calculated according to Varignon’s theorem.