[‚məl·tə′vī‚brād·ər]
(electronics)
A relaxation oscillator using two tubes, transistors, or other electron devices, with the output of each coupled to the input of the other through resistance-capacitance elements or other elements to obtain in-phase feedback voltage.
McGraw-Hill Dictionary of Scientific & Technical Terms, 6E, Copyright © 2003 by The McGraw-Hill Companies, Inc.
The following article is from The Great Soviet Encyclopedia (1979). It might be outdated or ideologically biased.

a relaxation generator of electrical oscillations of the pulsed type; it consists of two amplifiers connected by interstage positive feedback. The term “multivibrator,” which 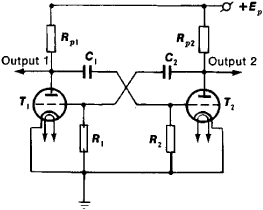 was proposed by the Dutch physicist van der Pol, refers to the multiplicity of harmonics in the spectrum of generated oscillations (in this sense a generator of sinusoidal oscillations could be called a monovibrator). The classical multivibrator circuit with two resistance-coupled electron-tube amplifiers with cross-connected plates and grids (see Figure 1) is known as the Abraham-Bloch circuit and is similar to the “cathode relay” circuit proposed by the Soviet scientist M. A. Bonch-Bruevich.

A distinction is made between balanced multivibrators (see Figure 1) and asymmetric multivibrators. In the former case the durations T1 and T2 of the operational cycles, which together make up the oscillation period Tn are equal (see Figure 2); in the latter case they are different. The times T1 and T2 are basically determined by the components R1 and R2, C1 and C2 of the multivibrator.

Figure 2. Shape of signal at the output of a multivibrator: (Tn) period of oscillations, (T1) and (T2) durations of operational cycles, (t) time

Multivibrators are used as pulse generators, frequency dividers, pulse-shaping circuits, and contactless switches for equipment used in automation, computer technology, and measurement technology, such as time relays, drivers, and shapers in digital computers. Like other relaxation oscillators, a multivibrator can operate in both the self-excited mode and delay mode (the latter type is called a flip-flop multivibrator; it is also frequently, but incorrectly, called a monovibrator). Upon receiving a control or starting signal, a flip-flop multivibrator becomes excited and generates one working pulse of duration T1 and then again undergoes a transition to the quiescent state (T2). Flip-flop multivibrators are usually connected in an asymmetric circuit. Their main field of application is the generation of pulses of strictly defined shape.

A form of electronic circuit that employs positive feedback to cross-couple two devices so that two distinct states are possible, for example, one device ON and the other device OFF, and in which the states of the two devices can be interchanged either by use of external pulses or by internal capacitance coupling. When the circuit is switched between states, transition times are normally very short compared to the ON and OFF periods. Hence, the output waveforms are essentially rectangular in form.

Multivibrators may be classified as bistable, monostable, or astable. A bistable multivibrator, often referred to as a flip-flop, has two possible stable states, each with one device ON and the other OFF, and the states of the two devices can be interchanged only by the application of external pulses. A monostable multivibrator, sometimes referred to as a one-shot, also has two possible states, only one of which is stable. If it is forced to the opposite state by an externally applied trigger, it will recover to the stable state in a period of time usually controlled by a resistance-capacitance (RC) coupling circuit. An astable multivibrator has two possible states, neither of which is stable, and switches between the two states, usually controlled by two RC coupling time constants. The astable circuit is one form of relaxation oscillator, which generates recurrent waveforms at a controllable rate.

In bistable multivibrators, either of the two devices in a completely symmetrical circuit may remain conducting, with the other nonconducting, until the application of an external pulse. Such a multivibrator is said to have two stable states.

The original form of bistable multivibrator made use of vacuum tubes and was known as the Eccles-Jordan circuit, after its inventors. It was also called a flip-flop or binary circuit because of the two alternating output voltage levels. The junction field-effect transistor (JFET) circuit (Fig. 1) is a solid-state version of the Eccles-Jordan circuit. Its resistance networks between positive and negative supply voltages are such that, with no current flowing to the drain of the first JFET, the voltage at the gate of the second is slightly negative, zero, or limited to, at most, a slightly positive value. The resultant current in the drain circuit of the second JFET causes a voltage drop across the drain load resistor; this drop in turn lowers the voltage at the gate of the first JFET to a sufficiently negative value to continue to reduce the drain current to zero. This condition of the first device OFF and the second ON will be maintained as long as the circuit remains undisturbed. See Transistor

A bipolar transistor counterpart of the JFET bistable multivibrator uses npn bipolar transistors. The base of the transistor corresponds to the gate, the emitter to the source, and the collector to the drain. Although waveforms are of the same polarity and the action is roughly similar to that of the JFET circuit, there are important differences. The effective resistance of the base-emitter circuit, when it is forward-biased and being used to control collector current, is much lower than the input gate resistance of the JFET when the latter resistance is used to control drain current (a few thousand ohms compared to a few megohms). This fact must be taken into account when the divider networks are designed. If pnp transistors are used, all voltage polarities and current directions are reversed.

Bistable action can be obtained in the emitter- or source-coupled circuit with one of the set of cross-coupling elements removed (Fig. 2). In this case, regenerative feedback necessary for bistable action is obtained by the one remaining common coupling element, leaving one emitter or gate free for triggering action. Biases can be adjusted such that device 1 is ON, forcing device 2 to be OFF. In this case, a pulse can be applied to the free input in such a direction as to reverse the states. Alternatively, device 1 may initially be OFF with device 2 ON. Then an opposite polarity pulse is required to reverse states. Such an unsymmetrical bistable circuit, historically referred to as the Schmitt trigger circuit, finds widespread use in many applications.

A monostable or one-shot multivibrator has only one stable state. If one of the normally active devices is in the conducting state, it remains so until an external pulse is applied to make it nonconducting. The second device is thus made conducting and remains so for a duration dependent upon RC time constants within the circuit itself. Monostable multivibrators are available commercially in integrated chip form. See Integrated circuits

The astable multivibrator has capacitance coupling between both of the active devices and therefore has no permanently stable state. Each of the two devices functions in a manner similar to that of the capacitance-coupled half of the monostable multivibrator. It will therefore generate a periodic rectangular waveform at the output with a period equal to the sum of the OFF periods of the two devices.

Astable multivibrators, although normally free-running, can be synchronized with input pulses recurrent at a rate slightly faster than the natural recurrence rate of the device itself. If the synchronizing pulses are of sufficient amplitude, they will bring the internal waveform to the conduction level at an earlier than normal time and will thereby determine the recurrence rate.

Multivibrators may be formed by using two cross-coupled logic gates, with the unused input terminals used for triggering purposes. The bistable forms of such circuits are usually referred to as flip-flops. See Logic circuits