typetype,
for printing, was invented in China (c.1040), using woodblocks. Related devices, such as seals and stamps for making impressions in clay, had been used in ancient times in Babylon and elsewhere.
..... Click the link for more information.  set by the Monotype machine. See printingprinting,
means of producing reproductions of written material or images in multiple copies. There are four traditional types of printing: relief printing (with which this article is mainly concerned), intaglio, lithography, and screen process printing.
..... Click the link for more information. .
The Columbia Electronic Encyclopedia™ Copyright © 2013, Columbia University Press. Licensed from Columbia University Press. All rights reserved. www.cc.columbia.edu/cu/cup/
The following article is from The Great Soviet Encyclopedia (1979). It might be outdated or ideologically biased.

(in art), a type of print graphics. The technique of monotype consists in the application of inks by hand to the ideally smooth surface of a plate, with subsequent printing on a press; the print produced is always unique. Works executed in monotype are characterized by subtlety of color relations and smoothness and softness of the edges of shapes, which outwardly makes monotype similar to watercolors. The monotype technique has been known since the 17th century but has been in wide use only since the late 19th century. The major figures in Russian and Soviet monotype are E. S. Kruglikova, A. V. Shevchenko, and R. N. Barto.

an automatic composing machine used for setting complicated book and journal text in the form of lines consisting of individual characters. The Monotype was invented in 1897 by T. Lanston (USA). The first Monotypes in the USSR were manufactured in 1947 at the Leningrad Printing Machinery Plant.

The executive program for an automatic caster is produced by a specialized MK programmer in the form of a wide punched tape (a combination of one to four holes corresponds to each symbol). During programming, the counter of the device adds the widths of the set symbols and space between words and calculates how much space must be added to make the length of the lines correspond to the predetermined measure. The operator codes the necessary increase in spacing width onto the tape by pressing two keys, based on readings from the scale on the set drum. The MK-5 programmer (Figure 1) has 364 keys and can be used to encode 288 different symbols and spaces and the required commands for controlling the automatic unit. 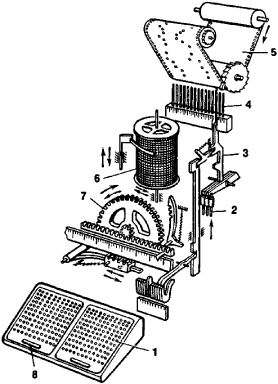 The MO-5 automatic caster (Figure 2) has a die case, a mold, and a caster. The dies are secured in the die case. The punched tape is decoded in the automatic unit in the sequence opposite to the sequence in which it was set. Upon receiving a command from the punched tape, the die case shifts and the required matrix moves over the casting cavity of the mold, whose width is determined automatically by a command from the punched tape. Then the mold, together with the depression in the matrix, is filled with molten type metal under pressure. As a result the required symbol or space is cast. The cast letters and spaces are pushed into the line channel. The lines of type, which are of identical length, are formed from individual characters and spaces. Galleys are made up from the lines. 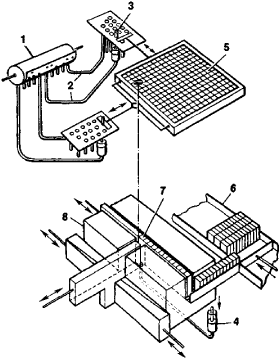 Figure 2. Diagram of the MO-5 composing machine (USSR): (1) paper tape; (2) air ducts; (3) air chambers with devices to limit motion of the die case in two directions; (4) pump for feeding alloy into form; (5) die case; (6) receiving tray; (7) line channel, into which cast letters are ejected; (8) mold to which one matrix in the die case is pressed

The rate of preparation of the executive program for the automatic unit is close to the typing speed on an ordinary typewriter. The automatic caster casts up to 180 characters per minute.

[′män·ə‚tīp]
(biology)
A single type of organism that constitutes a species or genus.
(graphic arts)
A printing technique in which a picture is painted on a sheet of glass or metal; the picture is transferred to a sheet of paper by pressure; additional copies require that the subject be repainted on the plate.
McGraw-Hill Dictionary of Scientific & Technical Terms, 6E, Copyright © 2003 by The McGraw-Hill Companies, Inc.

Feedback
Flashcards & Bookmarks ?
Please log in or register to use Flashcards and Bookmarks. You can also log in with
Flashcards ?
My bookmarks ?
+ Add current page to bookmarks
Mentioned in ?
References in periodicals archive ?
Using bright primary colors which decontextualizes the gravity of the assaults represented, monoprints such as "Rock" and "Retreat" are melancholy images of what we have witnessed, but unlike the real images, these are more aesthetically pleasing.
The evolution of Hany Rashed
The other thing about a monoprint is that when it's sold, that's it.
An interview with Percy Martin
ATMOSPHERIC A monoprint by Susan Dobson INSPIRED Susan Dobson and, below, drawing at Annapurna base camp
Mountains helped me reach my peak
There has been a great deal of confusion regarding the terms monoprint and monotype, which some artists, dealers and historians have used interchangeably.
A guide to popular printing methods: education is often your best asset in making sales and keeping customers returning to your shop. Here, we continue our series on printmaking methods with a look at some of the work being done at Pace Prints in New York City. (Part 2)
Big Allium Stripe Orange and Pink by Tessa Pearson is a large monoprint woodblock work with the architectural flowers against a striped background.
Colourful art is bloomin' great
Emin's drawings were the focus on the Lower East Side, where the show included a wide selection of monoprint and gouache-on-paper self-portraits, featuring frontal depictions of the artist seated, legs splayed or shut knock-kneed, hands draped at her sides or clutching her head in some spasm of sorrow.
Tracey Emin
Denbigh-born, Llwyd has taken part in all but one of the Anglesey Arts Weeks, but this will be the first time she has invited the public into her new home studio to take part in her two-day workshops, which will include monoprint, intaglio and relief processes.
Llwyd wants to leave her imprint on 10th Anglesey Arts event
Her partner in the exhibition is another local artist of high standing, Ann Bridges from Ruthin, who uses a stencil-based monoprint technique to explore the undersea world.
As recommended by the best; Alun Prichard previews an exhibition by an artist who has been given a prestigious seal of approval
Thus, for instance, her handwriting, a direct expression of the body, is not typically presented as such--it appears in a distanced manner: reproduced in neon, embroidery, or monoprint, which, in spite of its resemblance to straightforward drawing, is the reversed trace of a mark that was made on a plate rather than on the paper itself.
Tracey Emin: HAYWARD GALLERY
Traditionally, it is acceptable to draw or paint on a monoprint, so students are permitted to improve one or two of the prints with their choice of media.
A monoprint for all seasons
The threadbare sofa looks to have been distractedly spray-painted purple, mimicking the hue of the nearby monoprint Whole Things, 2010, which, like many of Hutchins's recent works on paper, is collaged with used objects, in this case a pair of boxer shorts and the Robert Stone paperback Dog Soldiers.
Jessica Jackson Hutchins
If you've been puzzled over the difference between a monoprint and a monotype, and are interested in learning or teaching the fine points of creating in either of these processes, this video should answer all of your questions.
Monotypes and Monoprints