organic compounds; one of the major groups of carbohydrates. They contain hydroxyl and aldehyde groups (aldoses) or keto groups (ketoses). Monosaccharides are divided into trioses, tetroses, pentoses, hexoses, and so on (containing three, four, five, six, or more carbon atoms in the chain). Natural monosaccharides with a carbon chain containing more than nine carbon atoms have not been found. 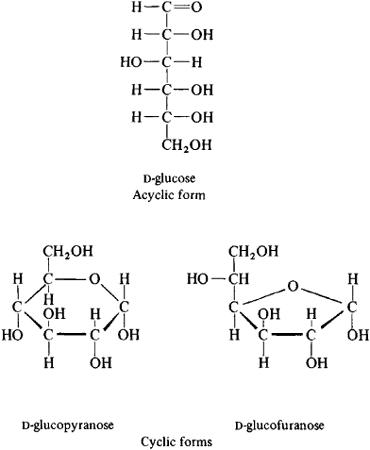 The decomposition of monosaccharides in the organism (for example, alcoholic fermentation; glycolysis) is accompanied by the release of energy. Some free monosaccharides and their derivatives (for example, glucose, fructose, and fructose diphosphate) are used in the food industry and in medicine.

Feedback
Flashcards & Bookmarks ?
Please log in or register to use Flashcards and Bookmarks. You can also log in with
Flashcards ?
My bookmarks ?
+ Add current page to bookmarks
Mentioned in ?
References in periodicals archive ?
Dietary monosaccharide formulations have been shown to alleviate several of the clinical manifestations in CDG patients.
Cerecor Receives Fast Track Designation from FDA for CERC-802 for the Treatment of Mannose-Phosphate Isomerase Deficiency
The decrease in the content of monosaccharides (fructose and glucose) in nitrogen treated plants compared to the untreated control during heat stress may reflect an increase in carbohydrate consumption or utilization for the maintenance of respiratory metabolism under heat stress (Jespersen et al.
COMPARATIVE METABOLITE PROFILING OF TWO WHEAT GENOTYPES AS AFFECTED BY NITROGEN STRESS AT SEEDLING STAGE
All the extracts showed the absence of anthraquinones, Monosaccharide's, and cardiac glycosides.
Investigation of phytochemical constituents in Azolla microphylla for antibacterial activity
Released monosaccharides were derivatized using 1-phenyl-3-methyl-5-pyrazolone (PMP), and the derivatives were analyzed using high-performance liquid chromatography (LC-20AT) with a DIKMA Inertsil ODS-3 column (4.6 x 150 mm) and a SPD-20A UV detector.
Purification, Preliminary Structural Characterization and In Vitro Antioxidant Activity of Polysaccharides from Camellia japonica Pollen
Interestingly, the results showed that the DDFPs had similar monosaccharide composition as the D.
Optimum Extraction, Characterization, and Antioxidant Activities of Polysaccharides from Flowers of Dendrobium devonianum
(a) Gas chromatogram of standard monosaccharides. (b) Monosaccharide component of APS1.
Structural Characterization, Antioxidant Activity, and Biomedical Application of Astragalus Polysaccharide Degradation Products
Collagen was modified by reducing monosaccharides in this study to imitate the changes, which spontaneously take place with aging and cause age-related atrophic changes in tissues.
Guiding the Differentiation Direction of Pancreatic Islet-Derived Stem Cells by Glycated Collagen
Trifluoroacetic acid (TFA), dextrans, and monosaccharide standards were purchased from Aladdin Reagent Int.
Preliminary Characterization of a Homogeneous Polysaccharide with Anticomplement Activity from Sijunzi Decoction
The molecular weight of the sweetener was correlated to all points on the pasting curve, with values up to eight times greater for monosaccharides than for polysaccharide sweeteners.
Characterize the impact of sweetener type on the pasting, thermal properties of starch systems
After hydrolyzed, the red seaweeds generate two main monosaccharides, the glucose, derived from cellulose and starch and the galactose, from galactans, which are subsequently fermented (Yanagisawa et al., 2011).
Optimized acid hydrolysis of the polysaccharides from the seaweed Solieria filiformis (Kutzing) P.W. Gabrielson for bioethanol production/Hidrolise acida otimizada dos polissacarideos da macroalga Solieria filiformis (Kutzing) P.W. Gabrielson para producao de bioetanol
Well, each letter of that acronym stands for a group of foods: the F for fermentable, O for oligosaccharides (wheat, garlic, onion), D for disaccharides (milk, ice cream), M for monosaccharides (apples, pears, honey) and P for polyols.
First diet proven to help bowel disorders
Fermentable oligosaccharides, disaccharides, monosaccharides and polyols (Fodmap) are carbohydrates that aren't easily broken down and absorbed by the gut.
Debilitating condition tackled with 'life-changing' new diet