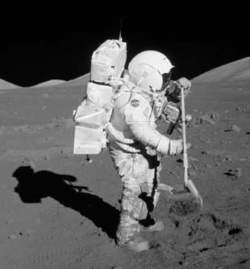 Conspiracists still debate whether human beings really walked on the moon or if it was just an elaborate ruse, but whether or not Americans did land there, many believe someone is indeed on the moon.

Whether our astronauts really went to the moon is beside the point. Someone is there and has been for hundreds of years.

One of the favorite conspiracy theories of recent years is that NASA faked the moon landings of the 1960s. The astronauts did not land on the moon at all. The whole mission was created in a Hollywood studio. In fact, Hollywood even made a movie, Capricorn One, to show how it was done.

Other conspiracy theorists point out that there are far greater mysteries on and about the moon than stressing over whether we really sent our astronauts there. What about the alien bases on the moon and their UFOnauts?

NASA whistle-blower Richard C. Hoagland, a leading contributor of controversial astronomical theories, charged the space agency with a conspiracy to cover up the discovery of ruins and various artifacts on the moon that would change the history of Earth as we know it. Hoagland claims to have unearthed a 1960 NASA-commissioned report by the Brookings Institution recommending that any future discoveries of alien life on the moon be kept from the public in order not to disturb the evolutionary flow of twentieth-century civilization.

The famed astronomer Carl Sagan once theorized that if extraterrestrial beings had come to observe Earth, they would quite likely have established bases on the moon and would logically have placed their main installations on the “dark side” to keep them safe from probing earthly eyes. Other researchers suggest that if there are alien bases on the moon, they have probably been there for thousands, if not millions, of years.

As early as September 7, 1820, during a lunar eclipse, French astronomers reported strange objects, separated by uniform distances, moving in straight lines and with military precision away from the moon’s surface. A similar procession of mysterious objects was seen on August 7, 1869, during a solar eclipse with the sun’s masking glare removed. In 1874 a Czechoslovakian astronomer claimed that he had seen a dazzling white object traverse the disc of the moon, then leave the surface and travel out into space.

In 1912 an English astronomer reported that he had seen an “immensely black object about 250 miles long and 150 miles wide” on the moon. He speculated that he might have sighted the shadow thrown by something colossal in size moving above the moon. In that same year, during a lunar eclipse, both French and British astronomers stated that they had witnessed something like a “superb rocket” shoot away from the surface of the moon.

The crater Aristarchus is the single brightest spot on the moon, and ever since Galileo began gazing at it with his telescope in 1610, observers have reported a wide variety of flares and lights issuing from that area. Plato, the darkest spot on the moon, has also been a popular area for changing light patterns to appear. Strange geometrical formations of lights, including luminous triangles and grids, have consistently manifested there.

Lights that blink as if sending signals constitute a common lunar phenomenon. On October 20, 1824, European telescopes detected intermittent flashes throughout the night from a dark region near Aristarchus. On July 4, 1832, the astronomer Thomas W. Webb observed a series of flashing dots and dashes, suggestive of Morse code. In 1873, after conducting an exhaustive study of the blinking lights on the moon, the Royal Astronomical Society of Britain issued the verdict that the “coded” lunar flashes were “intelligent attempts by an unknown race on the Moon to signal Earth.”

A peculiar facet of the blinking lights is that most of them occur in the northern hemisphere of the moon, suggesting to some UFO researchers that the extraterrestrial engineers have for some reason found that area to be more suited to expansion.

A very different claim is that the Russians are on the moon and that they, rather than extraterrestrials, may have secretly been mining its resources for many years. On top of that, from time to time alleged U.S. Air Force veterans, insisting upon complete anonymity, swear that the United States and the Russians established secret colonies on the moon in 1970—and that expeditionary teams discovered an alien base on its dark side.

“Alternative 3,” a June 1977 British Television production—the last in a series of special programs released by Science Reports—was simultaneously broadcast in the UK, Australia, New Zealand, and much of Europe with the frightening revelation that the major powers of Earth had abducted ordinary men and women since the 1960s to serve as slaves for the political elite who inhabit special moon bases designed to shelter those select few who will survive Earth’s destruction. The format of Science Reports had been that of serious science documentaries produced by highly respected science reporters, so when the staff announced that the entire alarming episode had been staged as an April Fool’s joke, the public was outraged. In spite of the disclaimers, “Alternative 3” spawned the theory that many highly intelligent physicists, chemists, and biologists had vanished and been taken to the moon.

Vladimir Terziski, who has specialized in a study of Nazi rocketry, says that scientists from Germany’s Third Reich landed on the moon as early as 1942. In the late 1930s or early 1940s, Terziski insists, Nazi scientists made contact with an alien culture that presented them with advanced technology. He further claims that as soon as the first German landing party touched down on the moon, they began digging and tunneling under the surface. By 1944 the Nazis had their first moon base.

In We Discovered Alien Bases on the Moon (1981), a former NASA jet propulsion engineer, Fred Steckling, stated that the public was not being told the full story concerning the astronauts’ visit to our planet’s satellite. David Hatcher Childress’s Extraterrestrial Archaeology (1994) continued the quest for more complete revelations from our space program, followed by Cynthia Turnage’s 1998 book ET’s Are on the Moon and Mars: The Photographic Evidence, in which she accuses NASA of erecting a wall of silence to hide the indisputable evidence of extraterrestrial life that has been captured on film. Turnage further suggests that some other government agency may be pressuring NASA’s scientists to cover up all evidence of alien life.

A favorite moon mystery of a number of conspiracy theorists is the allegation that famed director Stanley Kubrick faked the Apollo moon landings in exchange for a virtually unlimited budget to film his classic science fiction film 2001: A Space Odyssey. Kubrick solved the problem of making shots on the surface of the moon look expansive by employing the cinematic technique of front screen projection (FSP). Long before the days of computer-generated imagery (CGI) movie magic, the FSP process projected scenes behind actors so it would appear to the camera as if the actors were moving around on the set provided by the FSP. Actors could move around in a vast studio while it appeared that they were laboriously walking on moonlike scenes projected behind them.

Edgar Mitchell, a former astronaut who visited the moon in 1971, has stated that his conversations with people who worked in intelligence agencies and military groups convinced him that the U.S. government has been covering up the truth about UFOs for over fifty years. Mitchell admitted to becoming quite alarmed over revelations that there are humanoids manning craft far superior to those in the arsenal of any nation on Earth. On the other hand, when asked about the possibility of alien bases on the moon, he responded: “The notion that there are structures on Mars or the Moon is bonkers. I can certainly attest to the latter. I’ve been there.”