legendary English prophetess. She was first mentioned in an anonymous pamphlet, published in 1641, which described her as having prophesied various events of the reign of Henry VIII and later. She rapidly entered the folklore of English literature, her fame being increased by the great fire of London (1666), which she was also alleged to have predicted. A life by Richard Head was first published in 1667, and an anonymous pamphlet of 1686 purported to identify her as Ursula Shipton (1488–1561) of Knaresborough, Yorkshire. A new version of her life in 1862, with additional prophecies, was discovered to be a forgery.
The Columbia Electronic Encyclopedia™ Copyright © 2013, Columbia University Press. Licensed from Columbia University Press. All rights reserved. www.cc.columbia.edu/cu/cup/

Religious phenomena include numerous examples of false phenomena. Many of the most persistent of these have involved Mother Shipton. This legendary prophetess was introduced to many people in the English-speaking world in 1862, when book dealer Charles Hindley published a small chapbook about her. The booklet stated that Mother Shipton seemed to have accurately predicted a number of inventions, such as horseless carriages, the telegraph, and ironclad ships. Those who happened to encounter the chapbook over the next years were at first awed by the apparent accuracy of the predictions; then they were frightened by the last prediction: the world would end in 1881.

The public concern over Mother Shipton led to attempts to verify Hindley’s claims. In the pamphlet, he cited a 1684 publication by Richard Head titled The Life and Death of Mother Shipton. Although the 1684 pamphlet does exist, it does not contain the prophecies Hindley quoted. In fact, he first confessed to having made up the end of the world prophecy, and then to having made up all the prophecies. His confessions did not circulate to anywhere near the same extent that his original book did, however, and so many continued to be anxious about the end of the world prophecy. Church attendance rose, and people panicked in other ways, as well.

Who was this Mother Shipton to whom Hindley had attached his fake prophecies? The first mention of her appears to have been made in 1641, when Richard Head published a work titled The Prophecies of Mother Shipton, in the Reigne of King Henry the Eight. Foretelling the Death of Cardinal Wolsey, the Lord Percy and Others, as Also What Should Happen in Ensuing Times. The later 1684 pamphlet was an edited and expanded version of this earlier publication. Head circulated a biography of Shipton, who was supposedly the product of a union between her mother and the Devil, thus suggesting that Satan was the source of her seemingly accurate prophecies. In 1645, the famous astrologer William Lilly (1602–1681) published a booklet on Mother Shipton, too, which elaborated upon Head’s original publication.

In the end, the earliest accounts of Mother Shipton occurred more than a hundred years after her reputed prophecies were supposedly made. In fact, there is no evidence that a Mother Shipton ever lived. She appears to be a product of the imagination of Richard Head. As with many such mythical characters, Mother Shipton subsequently became part of the popular culture. In the 1660s she was even the subject of several stage plays (all comedies).

A full biographical account of Mother Shipton was compiled from the various books. She was born Ursula Sontheil in 1488 in a cave along the shore of the Nidd River outside Knaresborough, North Yorkshire, England. Nearby was a well with alleged mystical powers. Today, one may travel to Knaresborough and visit the cave and well. There are also a number of Internet sites and books that treat Mother Shipton as if she were a real historical personage. 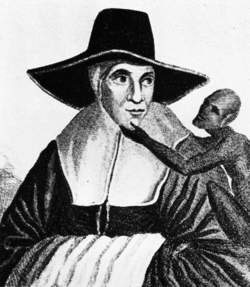 Ursula Shipton was born in Knaresborough, Yorkshire, to Agatha Southeil (Sowtheil or Southill), who was believed to be a witch and mistress to the Devil. Agatha had supposedly been impregnated by the Devil himself but, as Doreen Valiente points out, the male leader of a witches' coven was often referred to as the Devil. Agatha certainly displayed powers of clairvoyance and healing . . . and cursing. She was also said to be able to conjure up storms. Ursula, as a daughter of the Devil, inherited all of her mother's talents showing, as a young girl, that she could magically harm other children who taunted her for her ugliness. The Encyclopedia Britannica suggests that she was simply regarded as "the Devil's child" because she was so ugly. However, apparently she was frequently surrounded by poltergeist-like activity.

Despite her unattractiveness, Ursula married a young man named Tobias Shipton, a builder by trade. Nothing much is known of him, there being no mention of him in the many later references to Ursula.

Despite her dislike of prying neighbors and her tendency to bewitch them, Ursula became sought after as "Mother Shipton," witch and seer. People traveled from miles away because of the accuracy of her predictions. She is said to have predicted such things as cars, radio and/or telephone and the internet, iron ships, the California Gold Rush, and the Crystal Palace of the London Exhibition of 1851. All this was given in the verse: Carriages without horses shall go, Around the world thoughts shall fly In the twinkling of an eye. Iron in the water shall float As easy as a wooden boat. Gold shall be found, and found In a land that's not now known. A house of glass shall come to pass In England, but alas!

She made sensational prophesies about Cardinal Wolsey, the Duke of Suffolk, Lord Percy, and other men prominent in King Henry VIII's court. She also predicted the end of the world occurring in 1881, which panicked people and led to them to desert their homes and spend a night in prayer in the fields and in churches across the country.

Feedback
Flashcards & Bookmarks ?
Please log in or register to use Flashcards and Bookmarks. You can also log in with
Flashcards ?
My bookmarks ?
+ Add current page to bookmarks
Mentioned in ?
References in periodicals archive ?
A BUG'S LIFE: The campaign will highlight specimens such as the Mother Shipton moth, one of more than 2,500 UK species of the insect
Negative perceptions of moths to be challenged; UNLOVED INSECTS ? Campaign to reveal the insects' crucial role in the food chain
Mother Shipton's Cave is England's oldest tourist attraction, open since 1630.
MOTHER OF FRIGHTS; As Halloween approaches, head to Yorkshire where the picturesque and historic market town of Knaresborough is packed full of spooky surprises
Darren Oldridge surveys the changing characterisation and demonisation of the sorceress Mother Shipton between 1641 and 1700.
Angela McShane and Garthine Walker (eds), The Extraordinary and the Everyday in Early Modern England. Essays in Celebration of the Work of Bernard Capp
Located on the River Nidd, it boasts its own castle to Norman times, and Mother Shipton's Cave and Petrifying Well, named after the legendary soothsayer and prophetess.
Home rule; MARTIN WILLIAMS AND KELLY BARKER HIT THE ROAD AND UNCOVER SOME OF THE UK'S FINEST DESTINATIONS
Endnotes provide traceability for a good deal of claims yet too much depends on previous work of marginal research and is underpinned by unnamed data sources: "...in numerous surveys/polls..." "...upwards of 86 of (mixed gender) adults said that they believed in the validity of prophecy." Pieces of the puzzle come from Edgar Cayce Mother Shipton and Nostradamus.
The Return of Planet-X
Chapter 3, "Prophetic Creation and the Audience in Civil War England," analyzes the challenges facing ancient prophecy during the seventeenth century, especially as they related to Merlin and the rise of the Mother Shipton tradition.
Prophecy, Politics and the People in Early Modern England
MOTHER Shipton was a prophet who correctly predicted more than 400 years ago that Britain would have a Queen Elizabeth II.
MAMAZING ..BUT TRUE! MARK MOTHER'S DAY WITH OUR INCREDIBLE FACTS How Elvis slept in his ma's bed..plus more you never knew about mums
10: In which Yorkshire town is Mother Shipton's Cave?
Pub quiz uncovered
And unless he's a direct descendant of Nostradamus and Old Mother Shipton (who the bearded Euroseer may or may not have pulled on one of his rare incognito trips to rural Yorkshire) then it's just possible that he may have failed to foresee that afternoon's - for him - very happy turn of events.
Paul Haigh: A day in the life of G Lee: 55,964-1 acca and all
Music incipits are denoted by a decimal number; for example, the overture to Mother Shipton, the third work in section E, is numbered E3.1.
The Theater Music of Samuel Arnold: A Thematic Index
YOU'D have to be living in Mother Shipton's Cave not to know that today is Prince Charles's 70th birthday.
Happy birthday to the king in waiting
Drilling of the Mother Shipton gold target will commence when access approvals are gained.
Carpentaria Exploration Limited (ASX:CAP) Quarterly Report for the period ended 31 December 2011