Those portions of nervous systems that regulate and control the contractile activity of muscle and the secretory activity of glands. Muscles and glands are the two types of organ by which an organism reacts to its environment; together they constitute the machinery of behavior. Cardiac muscle and some smooth muscle and glandular structures can function independently of the nervous system but in a poorly coordinated fashion. Skeletal muscle activity, however, is entirely dependent on neural control. Destruction of the nerves supplying skeletal muscles results in paralysis, an inability to move. The somatic motor system includes those regions of the central nervous system involved in controlling the contraction of skeletal muscles in a manner appropriate to environmental conditions and internal states. See Gland, Muscle

The nerve supply to skeletal muscles of the limbs and trunk is derived from large nerve cells called motoneurons, whose cell bodies are located in the ventral horn of the spinal cord. Muscles of the face and head are innervated by motoneurons in the brainstem. The axons of the motoneurons traverse the ventral spinal roots (or the appropriate cranial nerve roots) and reach the muscles via peripheral nerve trunks. In the muscle, the axon of every motoneuron divides repeatedly into many terminal branches, each of which innervates a single muscle fiber. The region of innervation, called the neuromuscular junction or motor end plate, is a secure synaptic contact between the motoneuron terminal and the muscle fiber membrane. See Synaptic transmission

Since synaptic transmission at the neuromuscular junction is very secure, an action potential in the motoneuron will produce contraction of every muscle fiber that it contacts. For this reason, the motoneuron and all the fibers it innervates form a functional unit called the motor unit. The number of muscle fibers in a single motor unit may be as small as six (for intrinsic eye muscles) or over 700 (for motor units of large limb muscles). In general, muscles involved in delicate rapid movements have fewer muscle fibers per motor unit than large muscles concerned with gross movements.

Motoneurons are activated by nerve impulses arriving through many different neural pathways. Some of their neural input originates in peripheral receptor organs located in the muscles themselves, or in receptors in skin or joints. Many muscle receptors discharge in proportion to muscle length or tension; such receptors have relatively potent connections to motoneurons, either direct monosynaptic connections or relays via one or more intemeurons. Similarly, stimulation of skin and joints, particularly painful stimulation, can strongly affect motoneurons. Such simple segmental pathways constitute the basis for spinal reflexes. The other major source of input to motoneurons arises from supraspinal centers. The illustration shows the main nervous system centers involved in controlling the input to motoneurons. 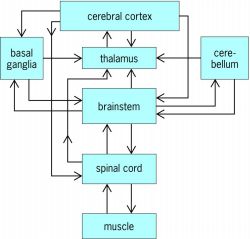 Schematic diagram of the major components of the vertebrate motor systems

At the spinal level, the motoneurons and muscles have a close reciprocal connection. Afferent connections from receptors in the muscles return sensory feedback to the same motoneurons which contract the muscle. Connections to motoneurons of synergist and antagonist muscles are sufficiently potent and appropriately arranged to subserve a variety of reflexes. In animals with all higher centers removed, these segmental circuits may function by themselves to produce simple reflex responses. Under normal conditions, however, the activity of segmental circuits is largely controlled by supraspinal centers. Descending tracts arise from two major supraspinal centers: the cerebral cortex and the brainstem.

The brainstem, which includes the medulla and pons, is a major and complex integrating center which combines signals descending from other higher centers, as well as afferent input arising from peripheral receptors. The descending output from brainstem neurons affects motor and sensory cells in the spinal cord. Brainstem centers considerably extend the motor capacity of an animal beyond the stereotyped reflex reactions mediated by the spinal cord. In contrast to segmental reflexes, these motor responses involve coordination of muscles over the whole body. Another major motor function of the brainstem is postural control, exerted via the vestibular nuclei of the ear.

Besides neurons controlling limb muscles, the brainstem also contains a number of important neural centers involved in regulating eye movements. These include motor neurons of the eye muscles and various types of interneurons that mediate the effects of vestibular and visual input on eye movement.

Another important coordinating center in the motor system is the cerebellum, an intricately organized network of cells closely interconnected with the brainstem. The cerebellum receives a massive inflow of sensory signals from peripheral receptors in muscles, tendons, joints, and skin, as well as from visual, auditory, and vestibular receptors. Higher centers, particularly the cerebral cortex, also provide extensive input to the cerebellum via pontine brainstem relays. The integration of this massive amount of neural input in the cerebellum somehow serves to smooth out the intended movements and coordinate the activity of muscles. Without the cerebellum, voluntary movements become erratic, and the animal has difficulty accurately terminating and initiating responses. The output of the cerebellum affects primarily brainstem nuclei, but it also provides important signals to the cerebral cortex.

At another level of motor system are the basal ganglia. These massive subcortical nuclei receive descending input connections from all parts of the cerebral cortex. Their output projections send recurrent information to the cerebral cortex via the thalamus, and their other major output is to brainstem cells.

At the highest level of the nervous system is the cerebral cortex, which exerts control over the entire motor system. The cerebral cortex performs two kinds of motor function: certain motor areas exert relatively direct control over segmental motoneurons, via a direct corticospinal pathway, the pyramidal tract, and also through extrapyramidal connections via supraspinal motor centers. The second function, performed in various cortical association areas, involves the programming of movements appropriate in the context of sensory information, and the initiation of voluntary movements on the basis of central states. Cortical language areas, for example, contain the circuitry essential to generate the intricate motor patterns of speech. Limb movements to targets in extrapersonal space appear to be programmed in parietal association cortex. Such cortical areas involved in motor programming exert their effects via corticocortical connections to the motor cortex, and by descending connections to subcortical centers, principally basal ganglia and brainstem.

As indicated in the illustration, the motor centers are all heavily interconnected, so none really functions in isolation. In fact, some of these connections are so massive that they may form functional loops, acting as subsystems within the motor system. For example, most regions of the cerebral cortex have close reciprocal interconnections with underlying thalamic nuclei, and the corticothalamic system may be considered to form a functional unit. Another example is extensive connection from cerebral cortex to pontine regions of the brainstem, controlling cells that project to the cerebellum, which in turn projects back via the thalamus to the cerebral cortex. Such functional loops are at least as important in understanding motor coordination as the individual centers themselves. See Brain, Nervous system (vertebrate)