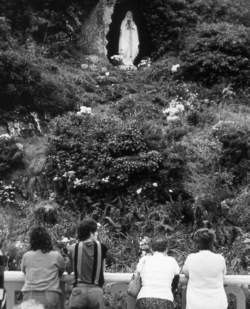 A group gathers at a site in Ireland where a statue of the Virgin Mary is believed to periodically move. Fortean Picture Library.

While not the most frequent of miracles associated with the Virgin Mary, periodically reports appear of people seeing statues of the Virgin move in ways that would appear to defy the natural order. For example, in 1998 a three-foot-high statue of Mary sitting in the yard of Raquel Fernandez of Corpus Christi, Texas, was seen by a passerby to have moved. The passerby told Fernandez what she had seen. The two then watched the statue for a moment and saw it turn its head, open its eyes, and take several steps. Word of the occurrence spread quickly, and suddenly people began to arrive to pray before the statue, and a number of them also reported seeing the statue move. Adding to the lore were reports of healing from those who came to pray. The statue hit the news when next-door neighbors began to complain about the crowds and asked that the statue be removed to a church.

Among the most famous of the moving statues is one of the Virgin at Ballinspittle in County Cork. It was first reported to have moved in 1985, after which it drew crowds of believers for several years. Over the years the crowds slowly dwindled. Then in 1997, new reports of the statue moving emerged and the crowds returned. According to the new reports, only the Virgin’s head has moved, and it moves only on those feast days dedicated to her. Interestingly enough, another moving statue can be found at the nearby Mount Melleray Cistercian Abbey and Shrine in County Waterford.

Church authorities have been most reluctant to back stories of moving statues and generally do not acknowledge such reports to the point of appointing a formal investigation committee. Many church leaders openly question the veracity of such reports.

Feedback
Flashcards & Bookmarks ?
Please log in or register to use Flashcards and Bookmarks. You can also log in with
Flashcards ?
My bookmarks ?
+ Add current page to bookmarks
References in periodicals archive ?
In Moving Statues - The Summer of 1985, Coleen McGuinness says: "I know what happened, 100%, and if I lived till 102 I will always say, 'I seen Our Lady'."
Solid faith in moving statues
"We understand the humans by using robots, the importance for example of eye gazing," said Ishiguro, who has also made robots that look like dead celebrities, or "moving statues".
Increasingly human-like robots spark fascination and fear
Also, viewers are delighted with images of a circus, where children are floating in large bubbles and moving statues and reappearing postcards before a black mist descends on London and New York.
Fantastic Beasts: The Crimes of Grindelwald trailer drops at Comic Con - and it looks EPIC; The epic second instalment to J K Rowling's new wizarding franchise looks incredible - if the trailer is anything to go by
Brian said: "The garden is called Moving Statues to Marriage Equality to mark the 30th anniversary of the first Woodie's store in the country.
Bloom with a view; 100,000 REVELLERS EXPECTED AT PHOENIX PARK GARDEN SHOW; Keith Duffy and Thalia Heffernan sprinkle stardust on opening day
Among the unique attractions are the "Walking Art" photoshoot, in which artists will collaborate with models to transform them into walking, breathing artworks: from glow-in-the-dark galaxies, to mythical creatures and moving statues, the human artworks will then be professionally photographed.
NYU Abu Dhabi Open Studios Returns with Interactive Public Program
The book, though more meditative than her debut, is still filled with wondrous images, from moving statues to exploding trees.
REVIEWS
They are moving statues heading for the busker-friendly square in front of the 13th century cathedral, with its hugely decorated facade.
Bask in brilliant Barca; Travel
A Gothic horror story with everything you might expect an ancient castle with a sick wife in the west wing, a beautiful beach and lighthouse, a forest rumoured to be haunted by a missing woman, remnants of a diary rescued from a fire, an old man who makes toys and automata, Tales of Hoffman, two young lovers, a sea cave, shadows which come alive--and moving statues. What is behind the mask?
Ruiz Zafon, Carlos: The Watcher in the Shadows
The story begins with an argument that icons abolished by religious reformation resurfaced as moving statues in early-modern gardens or theatre (the statue in Ben Jonson's Sejanus, or, perhaps differently, the pretend statue in Shakespeare's The Winter's Tale).
Automata and Mimesis on the Stage of Theatre History
They are taking part in a drama, literacy and history project entitled Moving Statues.
21st-century 'street urchins' recreate Victorian pictures
A woman in her 40s, waiting on the upper end of the staircase, was caught by the eyes of one of the moving statues - and decided to not back off a single inch.
Copper couple takes its time and the time of its audience
On the open day we did moving statues. We had to dress up and stand on pedestals.
WE'RE SO PROUD OF OUR SCHOOL; PUPILS GIVE THEIR VERDICT Young poets aim to inspire others
Encyclopedia browser ?
Full browser ?
CITE
Site: Follow: Share:
Open / Close