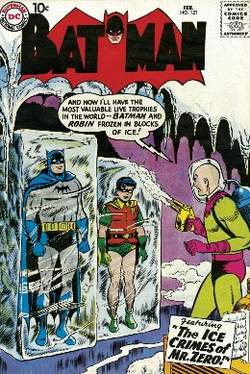 (pop culture)
The chilling Mr. Freeze may be one of Batman's best-known supervillains, but were it not for a television producer he might have remained in cold storage after his debut. Curt Swan's cover to Batman #121 (1959) featured a cookie-cutter criminal (a bald head, a kitschy costume, and a superweapon) freezing Batman and Robin alive inside giant blocks of ice. The story, “The Ice Crimes of Mister Zero” (yes, Zero) by writer Dave Wood and artist Sheldon Moldoff, begins with Mr. Zero—in green-and-red tights with a protective bubble helmet, looking like a possessed Christmas ornament— pulling a jewelry heist (nabbing “a fortune in ‘ice'”) with henchmen masquerading as ice cream–truck drivers. During their getaway, Zero's “ice gun” (resembling a pesticide sprayer) slicks the street behind them, sending the pursuing Dynamic Duo flailing. From his “remote mountain” headquarters, Zero discloses that he was once a criminal scientist who was doomed to live in frigid temperatures after an accident with experimental chemicals. Continuing his diamond larceny, he freezes Batman and Robin's Bat-ropes, Whirly-Bat blades, and even the heroes themselves, until their ingenuity stops—and cures— Zero with a steam bath. When executive producer William Dozier and company scoured comic books for villains for the live-action television series Batman (1966–1968), Mr. Zero's story proved enticing. Renamed “Mr. Freeze,” he was the fourth Bat-foe introduced in the campy series, bowing on February 2 and 3, 1966, in episodes seven (featuring actress Teri Garr in a bit part) and eight, with George Sanders as the rogue. Much was borrowed from Wood's Batman #121 script, including Zero's/Freeze's quick-freeze gun (augmented into an elaborate rifle), his frosty headquarters (with temperature controls to allow henchman access), an ice-cream truck for transportation, and his obsession with stealing diamonds. Freeze's origin was altered to ascribe his transformation to an earlier scuffle with Batman, the hero accidentally spilling Freeze's “Instant Freeze” solution on him; on television the character also donned a NASA-like containment suit instead of the colorful tights seen in the comics. In that two-parter, the industrious Caped Crusader wore Super-Thermo-B Long Underwear beneath his Bat-togs. The villain's ice shtick was popular enough to warrant return engagements without Sanders, whose minimalist performance won him few fans on the over-the-top show; Otto Preminger and Eli Wallach succeeded him in the role. DC Comics reintroduced the villain as Mr. Freeze in Detective Comics #373 (1968). In “Mr. Freeze's Chilling Deathtrap” by Gardner Fox and Chic Stone, Freeze's garb mimicked the television show's (but with green instead of TV's white and silver), and the villain once again immobilized Batman in a block of ice. Afterward DC again retired Mr. Freeze for years. Television, however, regarded the cold-hearted criminal as a major Bat-adversary: Mr. Freeze continued to dog Batman and Robin in their post-live-action series, appearing in animated episodes on The Batman/Superman Hour (1968–1969), The Adventures of Batman and Robin (1969–1970), and The New Adventures of Batman (1977–1978) (the latter program continued to air under various titles until 1981, keeping Mr. Freeze in circulation). After a minor appearance in a 1977 Batman arc featuring a union of the hero's foes, Mr. Freeze was thawed out again—even scoring a Jim Aparo–drawn cover—in “There'll Be a Cold Time in the Old Town Tonight,” by Len Wein and John Calnan, in Batman #308 (1979). By this point the comic-book version of the villain had taken on a look recognizable to his contemporary fans: a blueand- white costume, helmet, and crimson goggles. Occasional stories gave Freeze a mid-level profile, and his TV legacy warranted his inclusion in the third series of Kenner's Super Powers action figures (and spin-off comic books) produced in the mid-1980s. An inferior replicate of Kenner's Mr. Freeze figure was produced by then-fledgling manufacturer Toy Biz in 1989. Leave it to television once again to reinvent Batman's frosty foe. Batman: The Animated Series, the long-running “Dark Deco” cartoon that debuted in 1992, first aired “Heart of Ice,” an episode written by Paul Dini and directed by Bruce Timm, on September 7, 1992. This version of Mr. Freeze was actually Dr. Victor Fries (pronounced “Freeze”), a cryogenics scientist who clandestinely froze his terminally ill wife, Nora, until a cure could be discovered for her condition. A corporate exec ended funding for Fries' research, and an ensuing accident drenched the doctor in his cryogenic solutions, making him unable to exist outside of sub-zero conditions. Damned to life inside a temperature-regulating cybernetic suit, detached from human contact, Fries—now Mr. Freeze—sought vengeance with his cold-producing gun. Dini, Timm, and series co-creator Eric Radomski hired comic-book artist Mike (Hellboy) Mignola to design Mr. Freeze's sleek, simplified animation look. Portraying the villain was Michael Ansara, who struggled to find the right voice. “An actor's first natural instinct is to act,” recalled Bruce Timm. “I kept telling him it had to be less, a lot less—like a robot.” Ansara's icily heartless performance helped transform Mr. Freeze into arguably the most sympathetic figure in the Dark Knight's rogues' gallery. The frosty foe appeared in several episodes, as well as in the made-for-video animated movie Batman & Mr. Freeze: SubZero (1998). DC again followed TV's lead by absorbing this interpretation of Mr. Freeze into the comicbook continuity. Director Joel Schumacher's big-budget lampoon Batman & Robin (1997) starred Arnold Schwarzenegger as Mr. Freeze, spewing a succession of silly one-liners (including “Chill!” and “Cool party!”). While detested by most comics fans, the movie returned Mr. Freeze to the spotlight: action figures and merchandising followed (including a Toys R Us reprint of Batman #121), as did two different Six Flags amusement-park attractions based upon the villain. Clancy Brown was hired to play Mr. Freeze for the animated television series The Batman (2004–present), in which the villain has appeared in solo and team-up (with Firefly) episodes. The chilly monstrosity perennially returns to put Batman and Gotham City on ice in various titles, from Gotham Central to Batman: Legends of the Dark Knight, the latter of which featured Mr. Freeze in a 2005 story arc titled “Snow.”
The Supervillain Book: The Evil Side of Comics and Hollywood © 2006 Visible Ink Press®. All rights reserved.