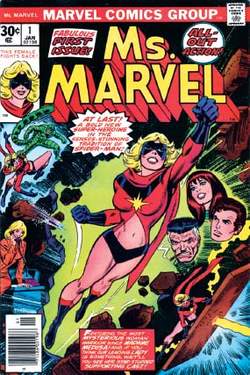 For a long time, Marvel Comics has been ever-vigilant in its quest to preserve ownership of characters and names. This has led to a host of female counterparts to male stars, such as Spider-Woman and She-Hulk, and a plethora of heroes with the word “Marvel” in their names. Having secured copyright on the names Captain Marvel (some three decades after the Fawcett star first hit the stands), Marvel Boy, and Marvel Girl, it was Ms. Marvel’s turn at stardom. The job of fleshing out the new character’s identity fell to writer/editor Gerry Conway. In the first issue’s editorial (Ms. Marvel #1, January 1977), Conway fell over himself to stress his feminist credentials and practically apologized for not being female, but rhetoric aside, this liberated heroine was cast very much in the typical, action-packed Marvel mold.

Ms. Marvel was Carol Danvers, a character created by Roy Thomas and artist Gene Colan, previously seen as a NASA security chief in the early days of the 1960s Captain Marvel strip, but now branching out into magazine editing, as the Gloria Steinem of the Marvel Universe. Unbeknownst to her, during a heated battle years earlier, when she was caught in an explosion next to Captain Marvel, some of his alien genetic structure had melded with hers, creating a Kree/human hybrid. This manifested itself in blackouts during which she donned a more revealing, navel-baring version of the Captain’s duds and flew off to batter ne’er-do-wells. In time, her two personalities merged and she acquired a family, a new writer (the X-Men’s Chris Claremont), a (navel-covering) costume revamp, and her own villains. The latter included future X-Men villain Mystique (in issue #16), Deathbird, Steeplejack, and Hecate. Later developments included a guest appearance by Captain Marvel, in issue #19, and a zippy new black costume designed by the late Dave Cockrum in the following issue. However, by its twenty-third issue, the comic was dead (the unpublished issue #24 would have debuted another future X-Men regular, Rogue).

Despite (or because of) the comic’s cancellation, Ms. Marvel immediately resurfaced in The Avengers (from #181) and experienced the first of many traumatic events, when she suddenly became pregnant by an interdimensional admirer called Marcus (son of occasional Avengers foe, Immortus). Within a week, she gave birth to an infant Marcus; it turned out to be a confusing plan to allow him to escape his otherworldly imprisonment, as he instantaneously grew to maturity and the two went off into the sunset, hand in hand. Except, of course, it was all an evil mind-control plot, and an embittered Carol Danvers reappeared a year later, only to be zapped by Rogue, who stole her powers and mind. The X-Men’s Professor X restored some of her consciousness, but after convalescing with the team for a while, she was captured by evil aliens, the Brood, who experimented on her, ultimately unleashing her full, Kree-engineered cosmic power. Confused? You will be….

Now calling herself Binary (in X-Men #164, 1982) and drawing almost limitless power from a “white hole,” she punched Rogue into orbit, and overcome with remorse, hooked up with a bunch of intergalactic pirates called the Starjammers, leaving the known universe for the rest of the 1980s. On eventually returning to Earth, she rejoined the Avengers, put on her earlier costume, and started calling herself Warbird (for no obvious reason). As a reasonably settled member of the Avengers, the future should have been secure for Danvers, but as her powers inexplicably began to wane, she turned to the bottle and was eventually court-martialed out of the team for reckless behavior. Post-millennial developments included a move to Seattle, where the soused superheroine hit rock-bottom and joined Alcoholics Anonymous. This led ultimately to a recall (her third) to the Avengers, where she looks set to stay for the duration. Her own new Ms. Marvel series was launched in 2006 and continued into 2010. —DAR