the production of a large number of secondary, strongly interacting particles (hadrons) in one event of the collision of particles at high energy. Multiple processes are characteristic of hadron collisions, but in rare cases they are also observed during collisions of other particles if their energy is sufficient to produce several hadrons (for example, in electron collisions in colliding-beam accelerators). In collisions of hadrons with an energy greater than a few giga electron volts (GeV), multiple processes predominate over processes of single production of mesons and elastic scattering of particles.

Multiple processes were first observed in cosmic rays, but their thorough study became possible after the development of high-energy charged-particle accelerators. Certain empirical laws governing multiple processes have been ascertained as a result of studies of the interaction of cosmic-ray particles with an energy of up to 106–107 GeV in a laboratory coordinate system and of accelerator-generated particles with an energy up to the order of 103 GeV (colliding beams).

The lightest hadrons—pions, which account for 70–80 percent of the secondary particles—are produced with the highest probability in multiple processes. Kaons and hyperons (˜ 10–20 percent) and nucleon-antinucleon pairs (of the order of a few percent) also account for a significant share. Many of these particles arise from the decay of resonances.

At high energies, the probability of a collision accompanied by a multiple process (the effective cross section of multiple processes) is almost independent of the energy of the colliding particles (it changes by no more than a few tens of percent upon a change in the collision energy by a factor of 104). The approximate constancy of the multiple-process cross section led to the use of the “black-ball” model to describe the processes of a hadron collision. According to the model, during each convergence of high-energy hadrons to distances less than the range of nuclear forces, an inelastic process of the multiple production of particles takes place; here the elastic scattering is primarily diffractive in nature (the diffraction of the de Broglie waves of the particles by the “black ball”). The model played an important role in the development of the theory of strong interactions (in particular, in establishing Pomeranchuk’s theorem of the equality of the effective interaction cross section of particles and antiparticles at extremely high energies). On the other hand, according to quantum field theory a slow growth of the multiple-process cross section is possible with an increase in energy E but may not take place faster than ln2E (Froissard’s theorem).

The number of particles produced in different collisions of hadrons of a specific energy varies sharply and in some cases is quite large (Figure 1). The average number of secondary particles <n> (average multiplicity) slowly increases with the energy E and is virtually independent of the type of hadrons colliding (Figure 1). Given the existing accuracy of measurement, the dependence of < n > on energy is described equally well by logarithmic functions or power functions (of the type Ev, where v < 1). This makes it difficult to choose among the various theoretical models of multiple processes, which predict different types of this dependence. The average multiplicity is much less than the maximum possible number of secondary particles, which is determined by the condition that the entire energy of the collision in the center-of-inertia system of colliding particles becomes the rest mass of the secondary particles. Thus, up to 70 pions could be produced in a collision of 70-GeV protons (from the Serpukhovo accelerator) with target protons. However, in reality the average multiplicity of charged particles at this energy is five to six particles. This means that only a small part of the collision energy goes to create the rest mass of the secondary particles—that is, the energy is expended primarily on imparting high kinetic energy (great momentum) to most of the generated particles. At the same time, a characteristic empirical principle of multiple processes is the fact that the transverse (to the collision axis) components p1 of the momenta of the secondary particles are usually small. The average value of p1 is approximately 0.3–0.4 GeV/c and is virtually constant in a very broad range of energies. Therefore, the secondary particles emerge in streams that are sharply directed and that taper in the direction of motion of the colliding particles with increasing energy (forward and backward in a center-of-inertia system; in the direction of motion of the incident particle in a laboratory system). 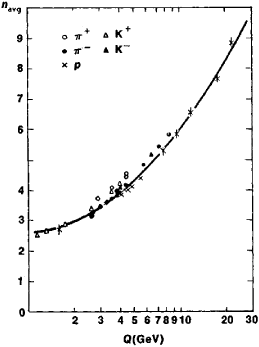 Figure 1. Average number of secondary charged particles navg as a function of the kinetic energy 0 of colliding particles in a center-of-inertia system. Different symbols are used to designate results that pertain to the scattering of π± mesons, K± mesons, and protons by nucleons.

c, regardless of what other particles (X) accompany the production of the particle c and in what quantity, are selected from among a large number of multiple processes that take place upon collisions of a and b hadrons. In 1967, A. A. Logunov, who established on the basis of quantum field theory the limiting laws of the growth of the cross section of limiting processes with increased energy (laws that are analogous to Froissard’s theorem), pointed out the importance of studying inclusive processes. A unique scaling law in the microcosm—called scale invariance, or scaling—has been detected by experimental study of inclusive processes in the Serpukhovo accelerator (1968) and by comparison of the data with the results of experiments conducted at lower energies. Scale invariance consists in the fact that at different collision energies the probability of production of an “inclusive” c particle with a specified value of longitudinal momentum PL (the projection of momentum on the direction of motion of the colliding particles) is a universal function of the variable x = PL/Pmax, where pmax is the maximum possible value (at the given energy) of the longitudinal momentum of the c particle (Figure 2). Thus, the longitudinal momenta of secondary particles increase in proportion to the collision energy. Indications of the existence of this type of dependence were previously obtained in the study of cosmic rays. This dependence stemmed from the fact that the energy spectrum of the second component of cosmic rays almost exactly duplicates the form of the energy spectrum of the primary component (G. T. Zatsepin and co-workers). Scale invariance has profound physical import. In 1969, R. Feynman proposed an explanation of scale invariance, based on model representations of the composite structure of hadrons. (The American physicist K. Wilson pointed out the possibility of this principle in 1963.) Figure 2. Graph illustrating the scale invariance in the inclusive process p 4- p + p → π− + X (where p is a proton, π− is a negative pion, and X is the aggregate of the other hadrons produced in the reaction). Dependence of the quantity (2/π)xdσ/dx, which is proportional to the differential cross section for the production of a π− — meson dσ/dx, on x = pL/pmax is plotted. Experimental data for different collision energies fit, to the accuracy of the measurement errors, into a universal dependence on x. Different symbols designate data that pertain to different collision energies (momenta) in a laboratory system; the points at 1,500, 1,100, 500, and 24 GeV/c were obtained in experiments on colliding beams, accelerator at CERN, and those at 70 GeV/c were obtained in a Soviet-French experiment at Serpukhovo.

Experimental data have shown that scale invariance is observed upon collisions not only of elementary particles but also of atomic nuclei at relativistic energies.

Because of the lack of a complete and consistent theory of strong interactions, various theoretical models are used to explain the empirical regularities that are observed in multiple processes. It is assumed in statistical hydrodynamic models— developed in the works of W. Heisenberg, E. Fermi, L. D. Landau (1949–53), and others—that during the brief duration of a collision the statistical equilibrium among the particles formed as a result of the collision has time to become established for strongly interacting particles. This makes it possible to calculate many characteristics of multiple processes, in particular the average multiplicity, which should increase with energy according to the exponential law Ev with an exponent v < 1 (in the Fermi-Landau theory, v = 1/4). It is assumed in another class of models (the Italian physicists D. Amati, S. Fubini, and A. Stangellini; the Soviet physicists E. L. Feinberg and D. S. Chernavskii) that the production of secondary particles takes place in “peripheral” or “multiperipheral” interactions of hadrons that occur as a result of the interchange of a virtual pion or another particle. The idea that the strong interaction is accomplished at high energies through the exchange of a particular state—the “reggeon,” which is a sort of stream of particles with a momentum that varies monotonically from particle to particle —has been used extensively since the end of the 1960’s for theoretical analysis of multiple processes. These concepts (which were developed in particular by such Soviet physicists as V. N. Gribov and K. A. Ter-Martirosian) make possible quantitative explanation of many regularities in multiple processes. According to the “multiperipheral” models and the “reggeon” model, the average multiplicity should increase in proportion to the logarithm of the collision energy.

Feedback
Flashcards & Bookmarks ?
Please log in or register to use Flashcards and Bookmarks. You can also log in with
Flashcards ?
My bookmarks ?
+ Add current page to bookmarks
Mentioned in ?
References in periodicals archive ?
Biometrics middleware enables the connection between instructions and services via multiple processes.
Biometrics Middleware Market: Growing Demand from Governments Creating New Opportunities
This was earlier split across multiple processes with manual data entry.
Mashreq Bank and Newgen Software Bag the Best Process Automation Initiative Awards, 2019
He added that "the ways we tend to organize refugees and displaced people is to organize them as a displaced community rather than to think about the multiple solidarities that they might form or the need to remain invisible and try to engage in multiple processes outside the realm of state views."
City Debates challenges ideas on the displaced
The controller suits rotary dial machines, production machines using multiple processes and automotive transfer lines.
Mitsubishi Electric Automation, Inc.--Booth 134102
It also has integrated multiple processes related to language pre-processing, word sense disambiguation, conjunction processing, preposition association, co-reference resolution and time and space analysis.
Indian Startup First to Solve Facebook Global Challenge in Artificial Intelligence
In addition, by analyzing not only the data residing in a single process but also the data that extends across multiple processes, the overall plant can be visualized and new findings provided, which can lead to further improvement in production efficiency from the viewpoint of total optimization.
Toyota and Hitachi Embark on Collaborative Creation Aiming to Build a High-Efficiency Production Model Using IoT Platform
Having multiple processes offers multiple advantages for Metro Mold.
Blow molding challenges embraced at Metro Mold
The results suggest that multiple processes, some predictable, can lead to these extreme events.
Rogue waves may have warning sign: analyses find signals that precede some mystery swells
This meant that a Windows XP computer could perform only one task at a time, but to coordinate multiple activities, Windows XP employed a time-slice mechanism in which the core processor spent l/50th of a second on each process to make it appear as if it were performing multiple processes at the same time.
Chip tip
The feature was added to enable plate and consumable inventory use in multiple processes, across batches.
Automation scheduling software
The notable impact this software has demonstrated is the visual understanding and the ability to compare multiple processes - enabling researchers to easily identify any subtle differences between different experiments.
DR IMTIAZ A KHAN COLUMNIST; Dr Khan is a bioinformaticist at the Cardiff University School of Medicine and develops software that helps researchers to capture and convey their laboratory activities