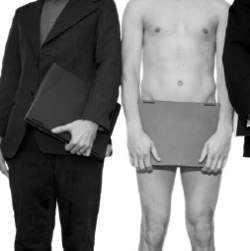 Dreams in which we are naked in public places are, in Western cultures, usually related to unpreparedness dreams involving feelings of anxiety.

Dreams of nakedness are among dream motifs so common that almost everybody has had them on more than one occasion. Other motifs include such scenarios as falling, and flying dreams, and unpreparedness dreams. Such shared dreams arise from experiences and anxieties fundamental to all people.

The significance of nakedness motifs varies from society to society, depending on each culture’s attitude toward nudity. In Western society, in which public nudity is often forbidden and even illegal, nakedness is a significant and complex symbol with a range of different meanings. Anxiety dreams in which we are naked (or are clothed only in our underwear) seem to be rooted in our early experiences as children, during which disapproving parents taught us that the naked human body is something to be ashamed of, or at least something that should be hidden from public view. If this interpretation is correct, our childhood experiences leave a deep imprint in our minds that is somehow activated in adult life during periods of high tension.

Whatever the origin of nakedness anxieties, in dreams the processes of the human mind tend to deploy images that symbolically express our hopes and fears. On the one hand, dreams of nudity may indicate such positive attributes as honesty and openness (a symbolic connotation found in such common expressions as “the naked truth”). On the other, nudity may indicate fear of exposing oneself, vulnerability, or fear of sexuality. An interpretation of nudity thus depends on the dreamer’s feelings, as well as the reactions of the other people in the dream.

The literature on dream symbolism indicates many other possible meanings of nakedness. Freud, for example, viewed dreams of nudity as indicating a longing for the relative freedom from care of early childhood. At a more mundane level, a dream of showing up at a bus terminal naked the night before a trip may simply be a subconscious reminder to pack the proper clothing.