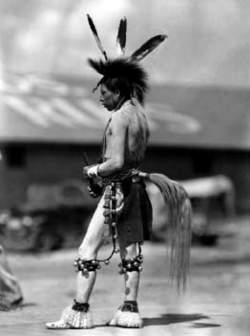 Pueblo Indian near Gallup, New Mexico, in 1937. Spirits and communication with the dead have long been an integral part of Native American culture. AP/WideWorld Photos.

In This Is Spiritualism (1959), Maurice Barbanell discusses the number of Native American spirit guides, saying, “North American Indians were masters of psychic laws, with a profound knowledge of supernormal forces and how they operated. This qualifies them, after their passing, to act as tutors and guides to their mediums.” Certainly most Spiritualists acknowledge that by their very lifestyle, being close to nature and working with the earth, Native Americans were probably much more in tune with the forces of nature and so were able to accept communication with spirits.

Whether or not it is because modern Spiritualism was born in North America, the tie with Native Americans seems firmly established to the point where many mediums—both in America and around the world—enjoy such a figure as their spirit guide. In Spiritualism Explained), E. W. Wallis wrote, “Many [American] Indian spirits become true and faithful friends. They act as protectors—'doorkeepers’ so to speak—to their mediums. They do the hard work of development in the circle and prevent the intrusion of undesirable spirits. Sometimes they are boisterous and exuberant in their operations and manifestations … we think it is wise to exercise a restraining influence over their demonstrations. They generally possess strong healing power and frequently put their mediums through a course of calisthenic exercises.”

Scottish medium Gordon Smith has a list of popular myths about mediums that he likes to dispel. One is as follows: “Myth #4: Mediums always have Native American spirit guides. There are lots of Native American guides, but they’re probably only there to try to sort out some of the cowboys who call themselves mediums!" Dreams in Native American cultures are considered very spiritually significant and may help guide the dreamers toward their future purposes in life.

The meaning of dreams to Native Americans varies from tribe to tribe. However, dreams are regarded as the most important experiences in the individual’s life and as the determining factors in the individual’s role in the life of the tribe. All dreams reflect the various supernatural and religious traditions of specific groups and are shaped by each culture’s distinctive influence and mythology. Generally, Native Americans regard the individual dream as having significance for the individual, and its influence is judged as good or bad, favorable or unfavorable, pure or impure in part by its content and in part by its effects on the dreamer.

The Navaho, the Kwakiutl of the Canadian Pacific Coast, and the Eastern Woodlands tribes usually interpret individual dreams from the point of view of their influence on the life of the individual. If the dream seems to indicate violation of taboos, it leads to purification and other rituals. If it indicates illness, it leads to curing rituals.

In the lower Colorado region, the Yuma see a clear distinction between the power-bestowing dream or dream vision, and the less significant dream of everyday life. Dreams are considered the direct basis of all religion, tradition, and shamanic power and are believed to begin before birth and to be more real than waking. The Yuma believe that whatever is dreamed has happened or is about to happen. The Mohave, on the other hand, believe that dreams are the basis of everything in life and that good dreams indicate good luck, whereas bad dreams equal bad luck. Also, they believe that shamans (“medicine men”) acquire powers by dreaming. According to the Kamia of the Imperial Valley of California and Mexico, dreams are best for young persons, as old people may die during dreams. The Kamia also believe that knowledge of the destiny of human souls can be derived from dreams.

In the Southwest culture area, the Navaho believe that gods, dreams, and sickness are causally related. Dreams represent the cause of illness, and such dreams are referred to interpreters or magicians, who reveal the cause and prescribe the cure. Dreams are viewed as good or bad according to the aftereffect of the dream. Certain dreams, such as death dreams, have standardized interpretations, and it is generally believed that gods and spirits of deceased men and animals can put dreams into the individual’s head. The Navaho also believe that good dreams come true only once in a while, whereas bad dreams always come true.

Among the Crow, visions are very important, and success in life is believed to result from the vision. According to the Dakota, dreams are revelations from the spirit world, and prophetic visions are what the person saw and knew in a former state of existence. Fasting by girls, who then tell their dreams to their parents, is a tradition among the Menomini, central Algonkin, and woodland Pottawatomie. Among the eastern Cree the fasting dream must never be shared lest it give offense to the spirits.

Among the Ottawa and the Ojibwa, for whom both pattern dreaming and individual dreaming are regarded as important, dreams are induced by formal parental suggestion to the child vision seeker to keep dreaming until he or she dreams right. Fasting is also important among the Kwakiutl Indians when they seek to gain the help of the spirits. Hunting dreams are regarded as good, and certain dreams are interpreted as indicating the conditions for fishing. The Kwakiutl regard dreams of the dead as bad dreams that will cause an epidemic in which many will die. Persons who have prophetic dreams that are deemed good, however, are considered to be valuable tribe members.

Feedback
Flashcards & Bookmarks ?
Please log in or register to use Flashcards and Bookmarks. You can also log in with
Flashcards ?
My bookmarks ?
+ Add current page to bookmarks
Mentioned in ?
References in periodicals archive ?
In addition to the Council, the USDA will: 1) create 10 to 15 USDA regional sub-offices that will provide education and technical assistance to Native American farmers and ranchers and their advocates; 2) undertake a systematic review of its farm loan policies to determine how its regulations and policies can be reformed to better assist Native American farmers and ranchers; 3) create a customer guide on applying for credit from the USDA; 4) create the Office of the Ombudsperson to address concerns of all socially disadvantaged farmers and ranchers; and, 5) regularly collect and report data on how well Native Americans fare under USDA's farm loan programs.
Native American farmers, ranchers and USDA reach historic settlement: Usda to pay $760 million in damages and debt relief
Native Americans and mixed-heritage Natives are the only racial/ethnic groups whose identities have been legislated by their governments (for further discussion of the legal status of Native American tribes and their members, see Weatherhead, 1980).
North America's Native peoples: a social justice and trauma counseling approach
As he traces Native American accomplish-ments throughout the book he is quick to cite the specific cultures that used the inventions and why they were necessary for that cul-ture.
A Native American Thought of It: Amazing Inventions and Innovations
Various researchers identify the learning styles of Native Americans using different classifications, which include field-dependence/field-independence, perceptual strengths, reflectivity/impulsivity, behavior, role of the family, teacher/pupil relationships, and cooperation versus competition.
What every teacher needs to know to teach native American students
While numerous Baptist congregations now exist on Native American reservations, some Anglos still fear Native American spirituality.
Celebrating Native American Heritage and Culture
Jenkins begins his history in the seventeenth century, by documenting the very negative but very public opinions of Native American cultures held by early settlers.
Philip Jenkins. Dream Catchers: How Mainstream America Discovered Native Spirituality
What is the biggest misconception that mainstream gay people have about gay Native Americans?
Strengthening the two-spirit legacy
Most of the discoveries Mann considers are a matter of consensus among many experts and will not surprise scholars of Native American studies.
The myth of the passive Indian: was America before Columbus just a "continent of patsies"?
There were an estimated 18 to 20 million Native Americans living in the U.S.
Interesting Facts About Native Americans
"This is a tremendously important effort to recognize Native Americans' service to this nation.
Patriot Nations: honoring the Native American tradition of service
The future shines rather bright for Native Americans, since the US Census Bureau projects the population to reach more than 10.2 million by July 2060.
Findnativeamericans.com is a New Platform to Help Users Find a Native American Soulmate