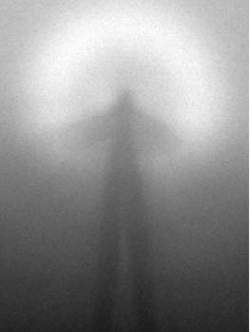 Specter of the Broken is a rare atmospheric phenomenon that produces a halo around the shadow of an object and is often mistaken for an apparition. This image was taken at Saddle Mountain, Oregon at sunset. Dan Sherwood/Photographer’s Choice/Getty Images.

According to Carl Jung, nature spirits were an early stage of human evolution. They have been termed deva, fairies, angels, undines (water spirits), sylvans (woodland spirits), pixies, and gnomes (earth spirits). Many gardeners believe that on occasion they see nature spirits among the flowers and vegetables. In the 1960s, Peter Caddy founded a community known as Findhorn on the barren, windswept coast of Inverness, Scotland, and watched it blossom into a rich, fertile paradise worked by nature spirits. When Peter Caddy and his wife Eileen started to work the area it was a truly inhospitable place, with sandy soil and sparse, desertlike life. But in a few short years the Caddys and some few others who joined them were producing huge vegetables (42-pound cabbages and 60-pound broccoli plants), beautiful flowers, 21 types of fruit, 42 herbs, and a total of 65 different vegetables. They said the focus of their work was love, and it was always acknowledged that everything was done with the help of the spirits of the land.

There is plenty of evidence for such spirits. Penny Kelly had a similar experience to Caddy’s at Lily Hill Farm, though she makes a point of not saying where the farm is located. She claims that the spirits, or elves as she calls them, brought about an annual harvest of one hundred tons of grapes from just thirteen acres of vineyards.

Feedback
Flashcards & Bookmarks ?
Please log in or register to use Flashcards and Bookmarks. You can also log in with
Flashcards ?
My bookmarks ?
+ Add current page to bookmarks
Mentioned in ?
References in periodicals archive ?
Dietrich Klinghardt presenting Applied Biophoton Physics for Healing: Unique Light-Based Tools to Diagnose and Treat Illness, Dale Pond presenting Radionics and Keely's Law of Sympathetic Oscillation, Hugh Lovel presenting Flowing with Milk and HoneyA Radionic Approach to Fine Agriculture, Ellen Kamhi presenting Hildegard of Bingen: Mystic, Psychic, Visionary, HerbalistWeaving the Tapestry of Healing from the Cosmic Elements, Shabari Bird presenting Chris Bird and Beyond: Secrets of the Soil and Nature Spirits, Gaetan Chevalier Ph.D.
United States Psychotronics Association (USPA) Announces Their 41st Annual Conference "The Art & Science of Energy Healing"
Our predecessors' belief in fairies may have originated in pre-Christian times when rivers, trees, hills and pools were regarded as the homes of nature spirits like dryads, nereids and oreads.
These fairy tales never get old; PARKER'S WAYWE REVISIT DEREK PARKER'S RAMBLES THROUGH RENFREWSHIRE
Though modernization hasalready made inroads intothe country, the age-old preBuddhist practices involving worship of nature spirits and animal sacrifices is still prevalent in Haa.
Pleasing gods and deities: Age-old bonism practice still lives on
In cases when elementals like 'lamang-lupa, engkanto or nature spirits' are 'displaced by the construction of the house,' they start residing in nearby structures, 'such as an old tree standing near the house.'
Treehouse of the spirits, home with unseen 'guests'
I wanted to find a way to make my 'elves' both the beautiful, wise nature spirits but also the scary monsters.
Immortal Works' Latest Release: "Dragon Ascending" by Amy Beatty
WHEN IT GETS COLD In pre-Christian times, branches were brought into homes as they were believed to provide warmth for nature spirits. They stayed up until the first signs of spring.
When should I put up my tree? The Christmas decorations have been up in shops since Halloween, but when is the 'right' time to put up your Christmas tree?
Many of her totemic creations are inspired by and named after the local nature spirits and forest deities represented in ancient temple sculpture and venerated in modest roadside shrines.
Mrinalini Mukherjee
Self-styled paranormal experts analysed the Edinburgh attraction to test a dead Scottish scientist's theory about the existence of resident nature spirits.
THEREY-FAIRY; Experts claim they've found garden's pixies
fairies, what he called "dwellers on the border, nature spirits".
Author refused to believe that fairy pictures were faked
Supernatural realms discussed include the realms of earth folk and nature spirits; paranormal realms where ghosts reside; spiritual realms where spirit guides aid human souls; divine realms that are home to angelic beings; multidimensional realms of UFOs and "cryptid" creatures; hellish realms of demonic beings; the source realm where the font of all creation (a.k.a.
Mysteries of the Supernatural
Ruth has created a unique mythology, incorporating nature spirits, fairies, sprites, and gates to other worlds.
Ruth, Greg. The Lost Boy
In mythology, trees are sometimes portrayed as the abodes of nature spirits. We even have a special word--dendrolatry--in reference to the way we worship trees.
People and trees: an intimate connection