[′nȯd·ə·kəl ə′strän·ə·mē]
(navigation)
The science of determining position and direction of a ship by observation of celestial objects.
McGraw-Hill Dictionary of Scientific & Technical Terms, 6E, Copyright © 2003 by The McGraw-Hill Companies, Inc.
The following article is from The Great Soviet Encyclopedia (1979). It might be outdated or ideologically biased.

The position of a ship at sea, that is, its geographic latitude ϕ and longitude λ, is determined by measuring the altitudes of celestial bodies over the visible sea horizon or over the plane of an artificial horizon created on the ship by different methods. The use of angle-measuring devices with an artificial horizon has expanded the possibilities for determining ship positions by astronomical means and has also increased the precision in measuring altitudes of celestial bodies.

Each value h of the true altitude of a celestial body yields one equation for determining the ship’s coordinates, so that at least two measurements of altitudes of celestial bodies are required to determine a ship’s position at sea. The solution of the spherical triangle with vertices at the celestial pole, the zenith of the observer, and the position of the star—that is, the parallactic or astronomical triangle—leads to the equation

If equation (1) is solved for t ioc, then we obtain the equation

Knowing the latitude ϕ of the position, we can also obtain the longitude λ = tloc — tGr using equation (2).

It is possible to determine both the latitude and longitude of a position from two measurements of altitude. With a larger number of measurements the accuracy of the determination can also be evaluated. Using what is called the estimated ship position, that is, the coordinates (ϕe, λe) of the position found graphically or analytically with respect to the course angle and distance covered (dead reckoning), we can represent each of the equations obtained in the form of an error equation or geometrically interpret each equation as an altitude position line. The position-line equation has the form 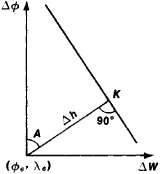 The correction for course indicators is determined by comparing the observed bearing of a celestial body and the azimuth A of this body, calculated from its known declination 8, hour angle tloc = tGr + λ, and the latitude of the observation position. The azimuth A can be calculated from the equation

Whenever the altitude of a celestial body is measured simultaneously with the bearing of the body, the azimuth can be calculated using either of the equations

Special tables for the calculation of the azimuth of a celestial body have been published.

The altitude of a celestial body over the visible sea horizon is measured by a sextant.

To determine the altitude h of a celestial body over the true horizon the reading obtained on the scale of the sextant is corrected by introducing the instrumental correction of the sextant, an index correction, and corrections that take into account the dip of the visible horizon, refraction, and the half-diameter and the parallax of the celestial body.

Historical survey. The positions of celestial bodies were already used in remote antiquity for orientation at an unknown position and for determination of the direction of travel. The growth of industry and trade and the expansion of navigation associated with this growth resulted, beginning in the 15th century, in the development of methods and instruments for determining a ship’s position on the open sea. Astronomical instruments suited for shipboard observations of stars, including angle rods, reflecting quadrants, astrolabes, and armillary spheres, became widespread. Ephemerides of the sun and planets, which are necessary for carrying out observations, were calculated. At this time, only the latitude of a position could be determined from astronomical observations. In the 16th and 17th centuries, methods were proposed for determining longitude based on observations of the angular distances between the moon and stars and observations of the eclipses of Jupiter’s satellites. A precise method for determining the longitude of a position based on the calculation of the difference between the local hour angle of a celestial body and its value at the moment of observation for the Greenwich meridian (λ = tloc — tGr) was introduced in nautical astronomy only in the second half of the 18th century, with the construction of the chronometer.

A theory for the combined determination of latitude and longitude was developed in the early 19th century. In 1808 the German mathematician K. Gauss proposed a method requiring the solutions of five equations. In 1824 the Russian geodesist F. F. Shubert published a new method for the joint determination of ϕ and λ. These methods, however, proved to be unsuitable for practical application. In 1843 the American seaman T. Sumner published a method for determining a ship’s position based on the fact that the position circle corresponding to the value of a measured altitude, that is, the circle of equal altitudes, can be represented over a short distance by a straight line on a map. He constructed altitude position lines by means of the points at which these lines intersect two parallel lines near the parallel of latitude of the estimated position. The Russian seaman A. A. Akimov proposed a different method, published in 1849, for constructing the position line using the single point of intersection of the position line with the estimated parallel of latitude and the direction of the position line. The perpendicularity of the altitude position line and the direction to the star was first used in this method. In 1875 the French seaman M. Saint-Hilaire proposed a method for drawing the altitude position line through a specific point and perpendicular to the direction to the star. This method continues to be used in the 20th century. The Soviet scientists N. N. Matusevich and V. V. Kavraiskii contributed much to the development of modern methods of nautical astronomy and the systematic application of the generalized method of position lines to the solution of astronomical problems.

Feedback
Flashcards & Bookmarks ?
Please log in or register to use Flashcards and Bookmarks. You can also log in with
Flashcards ?
My bookmarks ?
+ Add current page to bookmarks
Mentioned in ?
References in periodicals archive ?
Charles Frederick Alexander Shadwell born; a British admiral; wrote on nautical astronomy.
Centenaries for 2014
Milestones in the voyage are paired with discussions including nautical astronomy, seamanship, the American commercial enterprise, and the use of navigational tools.
Voyage to Jamestown; practical navigation in the Age of Discovery
The observatory has been at the heart of nautical astronomy since the 17th century.
A mean time in Greenwich: the restored and expanded displays at the Royal Observatory make for a fun day out for all the family
Janet was not only an accomplished mathematician and geometer, but was exceptional among intellectual women of the early 19th century; a successful woman in a man''s world, she also wrote several important works on nautical astronomy and designed a few novel variants of the sextant.
Nautical woman of substance; Flash back Under the Hammer by Mike Litherland Outhwaite & Litherland
Their contributions to the fields of natural and applied sciences, nautical astronomy, cartography and naval contruction were essential to the progress of mankind.
Portugal in the opening of the world