Horus (hôrˈəs), in Egyptian religion, sky god, god of light and goodness. One of the most important of the Egyptian deities, Horus was the son of Osiris and Isis. In a famous myth he avenged the murder of his father by defeating Set, the god of evil and darkness. As Horus the Elder he was represented as a falcon-headed solar deity, who was perhaps originally a king or high priest of predynastic Egypt. As Horus the Child, called Harpocrates by the Greeks and Romans, he was represented as a small boy with a finger held to his lips.
The Columbia Electronic Encyclopedia™ Copyright © 2022, Columbia University Press. Licensed from Columbia University Press. All rights reserved. 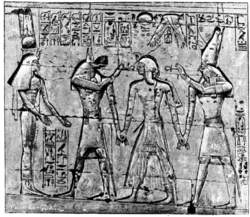