[′sfir·ə·kəl ‚trig·ə′näm·ə·trē]
(mathematics)
The study of spherical triangles from the viewpoint of angle, length, and area.

the mathematical discipline that studies the relationships between angles and sides of spherical triangles.

Suppose A, B, and C are the angles of the spherical triangle /tBC(see Figure 1), and suppose a, b, and c, respectively, are the sides opposite these angles. The following relations hold between the angles and sides of the triangle:

In these fundamental formulas, the sides a, b, and c are measured by the corresponding angles subtended at the center of the sphere. The lengths of these sides are aR, bR, and cR, respectively, where R is the radius of the sphere. If the designations of the angles and of the sides are changed through cyclic permutations (that is, A→B→+C→A and a→b→c→a), other formulas of spherical trigonometry, which are similar to the above, can be given. If any three elements of a spherical triangle are known, the formulas of spherical trigonometry permit the other three elements to be found—that is, the formulas make it possible to solve the triangle.

The formulas of spherical trigonometry are simplified in the case of right spherical triangles. When A = 90° and a is the hypotenuse, we have, for example,

The formulas needed to solve a right spherical triangle can be obtained from Napier’s rules. A description of one of the rules follows. Omitting the right angle, we imagine the five “parts”—that is, the other two angles, the hypotenuse, and the complements of the other two sides—as being arranged on a circle in the same order as on the triangle: B, a, C, 90° – b, 90° – c. Napier’s rule states that the cosine of each part is equal to the product of the sines of the nonadjacent parts, for example,

Gauss’ formulas, also known as Delambre’s analogies, state relations between all six elements of a spherical triangle and are useful in solving problems. The formulas are as follows: 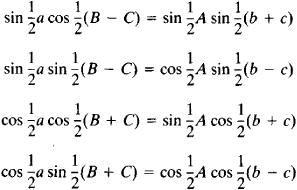 or the more accurate formulas

The Azerbaijani mathematician Nasir al-Din al-Tusi of the 13th century systematically studied all cases of the solution of oblique spherical triangles. He was the first to give the solution for the two most difficult cases. The fundamental formulas for oblique spherical triangles were found through the efforts of several mathematicians. The Arab Abu al-Wafa obtained formula (1) in the tenth century. Formulas of type (2) were given by the German Regiomontanus in the mid-15th century. The Frenchman F. Vieta gave formulas of type (21) in the second half of the 16th century. L. Euler presented formulas of type (3) and (31) in Russia in the 18th century.