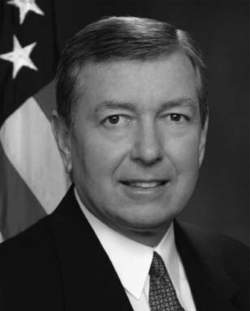 There is an unholy alliance, an invisible government, with only one goal on its agenda: to control all the nations of Earth.

In 1906 President Theodore Roosevelt issued a warning that every conspiracy theorist since has heeded and keenly understood: “Behind the ostensible government sits enthroned an invisible government owing no allegiance and acknowledging no responsibility to the people. To destroy this invisible government, to befoul the unholy alliance between corrupt business and corrupt politics is the first task of the statesmanship of today.”

In 2002, when Attorney General John Ashcroft christened another homeland security force the “Freedom Corps,” conspiracy theorists were reminded of the Freikorps, the German army’s “irregulars” who cleared the way for Hitler by murdering Social Democrats and Communists. Such allusions in that administration had a very sinister echo to many historians who believe that the Third Reich that rose to power in Germany in the 1930s was an attempt at a “New World Order” and that the Anglo-American business elite was deeply involved with its ominous creation.

Some economists have defined the Nazi state as a dictatorship of monopoly capitalism and consider Nazi Germany a capitalist paradise. It had a sixty-hour work week, low wages, and no unions. German and international cartels began preparing for war even before they financed Hitler. As countries succumbed to the Nazi juggernaut, German big business, which was able to absorb, even to plunder, former competitors for costs next to nothing.

Such U.S. corporations as Standard Oil, General Motors, IBM, Ford, the Chase and National City Banks, ITT, and many others had invested the equivalent of $8 billion in the Third Reich. When the United States became involved in World War II, the unsuspecting American foot soldiers had no idea that ITT built the airplanes that dropped bombs on them, that Ford and General Motors built the Nazi’s trucks and tanks. Ball bearings, crucial to the Nazi war effort, were manufactured in Philadelphia, yet were in scant supply in the States.

The secret or shadow government that manipulates political and economic events everywhere has only one goal in mind, and that is to eventually seize control of all world governments. While the elite secret cartel backed the Nazis, it also supported the Allies. It really didn’t matter to the New World Order who won World War II. The real wealth lies in war and genocide. In addition, a terrible full-scale war degrades, demoralizes, and damns humanity so that it will more easily accept serfdom and control by the elite who govern the New World Order.

For decades conspiracy investigators have tried to warn the mass population that a secret government agency has many underground bases where it carries out extensive high-tech, aerospace, and nuclear research, in addition to bacteriological and chemical experiments. These investigators have also learned that the secret societies of the Black Sun, the Thule, and the Vril were correct in their assumption that the ancient master race was extraterrestrial in origin. These secret societies were also correct when they suspected that aliens have bioengineered and genetically manipulated the human genome from the beginning of humankind’s origins on Earth. Many of today’s UFO researchers have learned that the aliens have mixed their DNA with ours, especially the reptilian genetic line, and live among us.

Norio Hayakawa, author of UFOs, the Grand Deception and the Coming New World Order, warns of a global UFO conspiracy linked to a “sinister occult force” that is manufacturing the “Grand Deception.” Hayakawa believes that this worldwide plot is designed to stage a counterfeit extraterrestrial contact or landing to simulate an alien threat of invasion in order to urgently and ultimately bring about a delusive New World Order. He warns that this “dramatic invasion and the ensuing catastrophic conflagration in the Middle East will immediately be followed by unprecedented [worldwide] earthquakes, a [global] financial crisis, and a sudden mysterious ‘evacuation’ [or ‘removal,’ depending on one’s viewpoint] of a segment of the population worldwide—all of which will culminate in an urgent, official declaration of a totalitarian New World Order that will last for seven years upon its inception.”

Such a shocking series of global events will place millions of people in “an absolute stupor for weeks,” Hayakawa states, during which time “an ingeniously executed, extremely effective ‘multi-leveled’ mind control program will be activated to calm the stunned populace.”

At this point in the scenario envisioned by Hayakawa, while the leadership of the New World Order struggles to assume complete control over the global populaces, a “dynamic, charismatic leader” will arise out of the European community (by then known as the United States of Europe), appear in a worldwide television broadcast, and offer a brilliant explanation to sedate the public. Hayakawa believes that this leader is currently around twenty-nine years old and is residing somewhere in Western Europe, “just waiting to begin his ‘official’ mission.”

Futurist, political theorist, and social analyst Michael Lindemann reached a point in his research where he became convinced that “an alien presence” on Earth was being “selectively revealed to the public with the blessing and sometimes direct involvement of government authorities.” In Lindemann’s view the architects of the New World Order, whom he refers to as “the Olympians,” have an understanding that the world as we know it is careening toward environmental and economic catastrophe. The Olympians plan “to chart a course through a time of tremendous upheaval during which millions or even billions of people might die, and to emerge from that time still in power and with greatly enhanced prospects for an ‘ideal’ society of their own design. Their ability to succeed in this strategy will depend on controlling the perceptions and behavior of the citizens of the most-developed nations.”

In 1992, when President George H. W. Bush began speaking about his hope that a “new world order” had been created after the conclusion of the Gulf War, evangelist Pat Robertson warned that the “new world order” was actually a code for a secret group of conspirators who sought to replace Christian society with a worldwide atheistic socialist dictatorship. President Bush, charged Robertson and a number of conspiracy theorists, was a member of one of the world’s most devilish and powerful secret societies, the Order of Skull and Bones. What was more, according to these same accusers, Bush was linked to the Bilderbergers and the Trilateral Commission, dangerous elitist organizations.

About the same time that President Bush’s alleged secret society affiliations were being exposed, a number of fundamentalist Christian evangelists began to take their first real notice of the UFO phenomenon and saw the mysterious aerial objects as the “signs in the skies” referred to in apocalyptic literature and in the book of Revelation as heralding the advent of the antichrist. It was a short leap of faith for many evangelists to begin to combine accounts of UFOs with secret societies and the Beast of Revelation who would bring the New World Order into being.

The proponents of this cosmic conspiracy believe that when President Ronald Reagan gave his famous “alien invasion” speech to the entire United Nations General Assembly in September of 1987, he had already secretly advised representatives of the 176 member nations that the leaders of their respective governments must meet the demands of the technologically superior extraterrestrials or be destroyed. In his speech to the General Assembly, Reagan said that he occasionally thought how quickly all nationalistic differences would vanish if humanity were facing an alien threat from outside this world. And then he suggested that an alien threat was already among us.

A number of conspiracy theorists stated that Reagan’s speech hinted at a plan agreed to by world leaders and extraterrestrial invaders that around the year 2000 a carefully staged “alien invasion” would convince the masses of the world that a real-life alien attack from outer space was about to begin. People of all nations would believe their leaders, who would tell them that the aliens were a benevolent species and that unconditional surrender to them would be for everyone’s own good.

Immediately following the surrender to the aliens, the united leaders will form a One World Government, a New World Order, thus fulfilling biblical prophecies about a return to the days of Babylon. The aliens will reveal themselves as demonic entities that delight in doing Satan’s work.

Under the One World Government, the following laws and rules will apply: