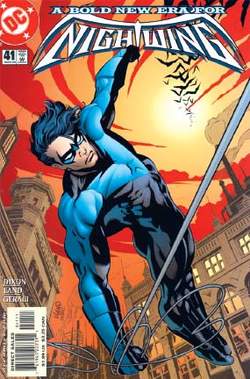 DC Comics’ Nightwing—formerly Robin the Boy Wonder—toiled for forty years under the shadow of the Batman as comics’ premier sidekick. First appearing in April 1940 in Detective Comics #38, Dick Grayson, the junior member of the Flying Graysons circus family, witnesses his parents’ deaths in a sabotaged trapeze incident. This murder is also observed by millionaire Bruce (Batman) Wayne, who as a child had similarly watched his own parents die. Grayson becomes Wayne’s ward, and after months of rigorous training in the subterranean Batcave, joins Batman as his crime-fighting ally, Robin the Boy Wonder. Clad in bright red, green, and yellow, Robin’s bubbly demeanor softened Batman’s harder edge, and for decades this Dynamic Duo blazed through hundreds of adventures in comic books, movie serials, radio shows, newspaper strips, and the nonsensical live-action Batman television series (1966–1968).This was succeeded in the fall of 1968 by an animated program, The Batman/Superman Hour, cut from the same campy cloth.

Then came the 1970s. Licking its wounds from marketplace outdistancing by Marvel Comics, former top dog, DC, implemented a host of sweeping editorial changes in an effort to win back readers. Among them was returning Batman to his roots as a “creature of the night,” in a movement largely orchestrated by writers Frank Robbins and Dennis O’Neil, artist Neal Adams, and editor Julius Schwartz. Batman—rechristened “the” Batman as in days of old—now preferred the shadows to the limelight of television, displacing his spirited Boy Wonder in the process.

In Batman #217 (December 1969), Grayson, who by this point had matured to his late teens, moved from his home in Gotham City and entered Hudson University. As Robin the “Teen” Wonder, the hero floundered through the 1970s in irregular guest appearances and backup stories. Designed as a cheerful counterpoint to Batman’s darkness, Robin without Batman didn’t seem to work (notwithstanding some lighthearted solo stories in the more innocent times of earlier decades). He grew introverted, struggled to cultivate his own identity, and became estranged from Batman in the process. In October 1980, Robin was included as the leader of the revamped New Teen Titans (a group he’d been shunted into in its previous incarnation), and under the watch of writer Marv Wolfman and artist George Pérez, he began to emerge as a character in his own right.

When Jason Todd was introduced as the new and younger Robin in the 1983 Batman titles, Wolfman and Pérez took it upon themselves to reinvent the original Boy Wonder. Grayson, they discovered, was a cipher, with little individuality outside of Robin’s.

So they appropriated the basic components of his heroic guise—his acrobatic flair and detective skills—and made the Teen Wonder a natural leader. As the Titans’ tactician, Grayson was now a man, and it was time for him to be Robin no more. In Tales of the Teen Titans #39 (February 1984), he permanently retired his crimson tunic, and became the ebon-clad, blue-feathered Nightwing, five issues later.

Nightwing led the Titans through myriad escapades, falling in love with and almost marrying teammate, Starfire, along the way. In the lengthy “Knightfall” serial that ran through the Batman comics beginning in late 1992, the rift between Nightwing and Batman intensified when the Dark Knight, after being crippled by the villainous Bane, selected someone other than Grayson to succeed him. Nightwing felt that he should have been chosen to inherit the “mantle of the Bat” and deeply resented his mentor. Nightwing and Batman ultimately came to grips with the reasons behind their emotional separation, and Wayne embraced Grayson as his son, even asking him to temporarily adopt the Batman guise in the “Prodigal” storyline (1994–1995).

Through these appearances, Nightwing had become a fan favorite, and readers clamored for the character to headline his own title. DC Comics hesitated, stayed by the stigma of Grayson’s longtime sidekick status, but tested his wings in 1995 first with a one-shot, then with a four-issue miniseries. Critical and commercial reaction to both was strong, and in October 1996, Dick Grayson—one of comics’ most recognizable characters—was at last awarded his own ongoing title with the release of Nightwing #1. The hero patrolled the streets of Bludhaven, a woefully corrupt city near Gotham, in a dual capacity: Armed with glove gauntlets (replacing the utility belt he wore as Robin), night-vision lenses, martial-arts mastery, and unbreakable “Escrima sticks” in his guise of Nightwing; and with a badge as Bludhaven police officer Richard Grayson. During the summer of 2003, he rejoined several of his former Titans teammates as the leader of the all-new Outsiders.

Despite the labors of talented DC Comics writers and artists, Dick Grayson remains Robin in the minds of the public at large. Actor Chris O’Donnell portrayed a twenty-something Grayson/Robin in the movies Batman Forever (1995) and Batman & Robin (1997), interestingly, the former film includes the character mentioning “Nightwing” as a possible heroic name. In the late 1990s, Grayson finally broke free of the bonds of pop-culture restraints and appeared on television as Nightwing in the animated New Batman/Superman Adventures.

After Batman was seemingly killed in 2009, Grayson accepted his destiny and assumed the role of Batman, with Bruce Wayne’s alleged son, Damian, acting as his Robin. When the original Batman turned up alive in 2011, he had Grayson continue to operate as Batman in Gotham City, while he organized “Batman Incorporated” around the world. In September 2011, DC launched a new Nightwing series in which Grayson once more appears in that costumed persona.

Actually, DC’s first Nightwing was Superman himself! The sinister Brainiac had captured the Kryptonian city of Kandor (before the planet exploded) by shrinking it and keeping it within a bottle. Superman rescued the Bottle City of Kandor and kept it in his Fortress. Starting in 1963, Superman and Jimmy Olsen would adopt the identities of Nightwing and Flamebird to act as costumed crime fighters in Kandor, in imitation of Batman and Robin. The most recent Kryptonian version of Nightwing is Chris Kent, co-created in 2006 by Geoff Johns and Richard Donner, the director of the classic 1978 Superman movie (and named after its late star, Christopher Reeve). The son of Phantom Zone villains General Zod and Ursa, Chris was raised briefly by Clark Kent and his wife Lois Lane. —ME & PS

Feedback
Flashcards & Bookmarks ?
Please log in or register to use Flashcards and Bookmarks. You can also log in with
Flashcards ?
My bookmarks ?
+ Add current page to bookmarks
Mentioned in ?
References in periodicals archive ?
Also mentioned in this chapter are The Bat People (1974), Rabid (1977), Nightwing (1979), The Hunger (1983), Bats (1999), and Daybreakers (2010).
Meehan, Paul. The Vampire in Science Fiction Film and Literature
Batman and his allies--including Nightwing and Batgirl--quickly realize that the Talons have returned, yet the reason for the killings remains tauntingly unknown.
Batman: The Court of Owls
The studio also wants to introduce more comic book characters like Black Adam, Nightwing, Green Lantern Corps, Supergirl, Batgirl, Plastic Man and more.
DC Movies Coming Soon
I witnessed his growth into adulthood and transformation into Nightwing, a confident, outgoing adventurer who brings together the DC heroes in a way that the more reclusive Batman cannot.
Batman is turning 80: Here are key moments in the comic books
The former Love/Hate star is currently vying for the lead role in Nightwing and has shown just how keen he is by dressing up as the DC Comics character.
It's all right on the Night for our Barry
As with Arthur, Wayne surrounds his Batman persona with a number of knights (the Gotham Knights) who serve under such code-names as Nightwing, Robin, Oracle, and others.
Nolan's Batman Saga: Realism and Heroism
The dialogue is fun, and the art is energetic and full of personality!" said Brett Booth, artist for DC Comics (Titans, The Flash, Nightwing).
Eon Productions Joins Comics Publishing World with Debut Title "Kid Nash" - a Monthly Free Digital Comic Book
DC has supposedly found its Nightwing in actor Finn Wittrock, according to unofficial sources.
Has DC cast its Nightwing actor?
Nightwing Live action adaptation of the Batman-centric
Planned Feature Films with Licensing Potential, 2017-2025
A NightWing dragonet blessed (or cursed!) with the gift of prophecy foresees the coming of the most powerful dragon ever to take wing - and myriad paths of death and destruction for the future!
Wings of Fire Legends: Darkstalker
With DC characters, including The Flash, Harley Quinn, Nightwing and Solomon Grundy, as well as the Bat, Superman and Wonder Woman - I struggled to put this game down.
Holding out for a hero? Try these
Tom, who was with 21-year-old Zoe Blitz, dressed as Nightwing, the grown up version Robin of Batman and Robin.
SUPER TROOPERS; Fans flock to convention dressed as their favourite characters