Nikola Tesla: The Genius and the Aliens 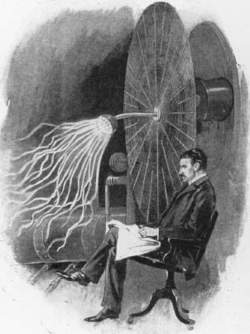 The Croatian inventor Nikola Tesla monitors his “wireless telegraphy apparatus.” Was his genius with electronics purely his own, or did aliens lend him assistance?

Nikola Tesla: The Genius and the Aliens

When Tesla died, he was the holder of over seven hundred patents. Some researchers claim that the genius may have had some extraterrestrial assistance.

Nikola Tesla (1856–1942) was the genius who brought the world into the electrical age. Born in the village of Smiljan in the province of Lika, Croatia, in the old Austro-Hungarian Empire, Tesla received his elementary education in Croatia, then attended the Polytechnic School in Graz, Austria, and the University of Prague. He worked as an electrical engineer in Europe before emigrating to America in 1884 and arriving on the streets of New York City with four pennies in his pocket.

Tesla arrived at his brilliant scientific hypotheses by the power of a vivid imagination and vast intuitive abilities. Before he even started drawing plans for a new invention, he would work out the entire idea in his mind. Mentally, he would alter the construction, make adjustments, even operate the device. Perhaps most astonishing is that Tesla never had to put the drawings of the new mechanism down on paper for himself. Because he had worked the concept out so completely in his mind, he could give the exact measurements of all the parts to his workmen, and when the machine was completed, all the parts would fit just as accurately as though Tesla had made a drawing or blueprint. The inventions that he conceived in such a manner always worked. In all of Tesla’s career there was never one single exception to the effectiveness and accuracy of his mental instructions. In this way he made his first electric motor, the vacuum wireless light, the turbine engine, and many other inventions.

Tesla worked less than a year with Thomas Edison in New Jersey. Although they respected each other’s genius, the differences in style between the two made a long-term working relationship out of the question. George Westinghouse, founder of the Westinghouse Electric Company, understood the advantages of Tesla’s system of alternating current over Edison’s direct current, and he bought patent rights from Tesla in 1885. The efficiency of AC was demonstrated effectively when Westinghouse successfully lit up the whole World Columbian Exposition at Chicago in 1893.

Tesla established his own laboratory in New York City in 1887, and it was here that the inventor would demonstrate the safety of alternating current by allowing electricity to flow through him and light the lamps he held in his hands. In 1891 he became a U.S. citizen, and in 1895, according to certain of his intimates and various biographers and investigators, he made contact with alien intelligences by projecting certain energy rays into space. By conducting mental exchanges with these intelligences, Tesla developed in rapid succession the induction motor, new types of generators and transformers, a system of alternating-current power transmission, fluorescent lights, a new type of steam turbine, and plans for a new wireless transmission of power.

Tesla began construction of a wireless broadcasting tower on Long Island, but in 1900 the financier J. Pierpont Morgan withdrew his support. Tesla continued to work with turbines and other projects until 1931, when, legend has it, he joined other scientists working on a top-secret project in invisibility that would culminate in the famous Philadelphia Experiment.

According to certain researchers, the initial stages of the experiment began under the aegis of a U.S. Navy–sponsored team including Tesla and the Austrian physicist Emil Kurtenauer. In 1933 the project was moved to the Institute for Advanced Study at Princeton University. Joining the group was John von Neumann, a brilliant mathematician who had been at the University of Berlin and the University of Hamburg before he emigrated to the United States. Although Albert Einstein was aware of the experiment, now called “Project Rainbow,” he did not participate directly in its operation.

According to Al Bielek, who claims to have joined the project later, the concept of the Philadelphia Experiment was set up by a group of extraterrestrial intelligences (ETIs) who had actually met physically with President Franklin Delano Roosevelt in 1934 aboard the battleship Pennsylvania, somewhere in the mid-Pacific. Roosevelt made an agreement with the aliens that they would exchange ETI technology for certain planetary privileges. Tesla, who had been interacting with the extraterrestrials since 1895, arranged the meeting.

Tesla’s initial communications had been with entities from the Pleiades who appeared to be completely human and who explained that humankind on Earth had issued from their original stock. These aliens, labeled the K-Group, could easily pass for average humans—except for the greenish tint of their skin. Whenever they wished to interact undetected with humans, they would dye or color their epidermis.

After a second meeting with the ETIs, President Roosevelt signed a treaty of mutual noninterference, and the sciences in the United States enjoyed a remarkable acceleration of theory and application on nearly all levels.

Bielek has claimed that the group of geniuses carried out a partially successful experiment in invisibility at Princeton in 1936. The initial navy test in invisibility was scheduled to occur on a cold day in March 1942. All the levers were pulled, the buttons pushed, but nothing happened. Bielek is convinced that Tesla sabotaged that first attempt to place a warship into a state of invisibility. Tesla supposedly had issued a formal protest against having a live human crew on board the Eldridge, the destroyer used in the test. The brilliant inventor, who created every detail first in his mind, insisted that the experiment should first be tried with the vessel unmanned. He also demanded that the scientists be given more time to work out some problems that he foresaw as he reviewed all the equipment. Tesla’s request was denied. Told that the Philadelphia Experiment must go forward, he left Project Rainbow in protest.

Ten months later, on January 7, 1943, Tesla was found dead in his hotel room. According to many varying accounts and theories, the navy’s experiment in invisibility was conducted in July or October of 1943 with disastrous results. The Eldridge got through the test all right, but many of the crew members suffered horrible tortures and ghastly deaths.

At the time of Tesla’s death, he held over seven hundred patents. The many notebooks that the genius left are still studied by engineers and scientists for inspiration and new ideas.