[nī′trā·shən]
(organic chemistry)
Introduction of an NO2- group into an organic compound.
McGraw-Hill Dictionary of Scientific & Technical Terms, 6E, Copyright © 2003 by The McGraw-Hill Companies, Inc.
The following article is from The Great Soviet Encyclopedia (1979). It might be outdated or ideologically biased.

the introduction of nitro groups, —NO2, into molecules of organic compounds by the action of various nitrating agents. Nitration may be accompanied by the introduction of other functional groups, such as —F (nitrofluorination) and —OH (oxidative nitration), depending on the structure of the compound being nitrated and the conditions of the reaction. Nitration is one of the most thoroughly studied chemical processes, both theoretically and practically.

Nitration of aromatic compounds is accomplished by nitric acid, nitrating mixtures, or inorganic nitronium (NO2+) salts. First, a complex (I) is formed between the nitronium cation and benzene: 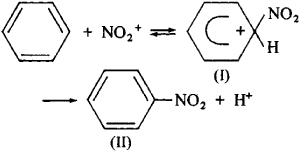 A proton then splits off, with the formation of the nitro compound (II). The reaction proceeds at ordinary or low temperatures. More rigorous conditions are required for the introduction of subsequent nitro groups. In direct nitration, a maximum of three nitro groups may be introduced into an aromatic system. The presence of functional groups, which supply the ring with additional electron density (for example, amino, sulfo, and hydroxyl groups), facilitates nitration, and in some cases such groups may be replaced by nitro groups. Thus, in the nitration of phenolsulfonic acids, the sulfo group is replaced by a nitro group.

The nature of the substituents significantly affects the orientation of the entering nitro group. In the presence of mercury nitrates, nitration of aromatic compounds is accelerated and may be accompanied by oxidation (both nitro compounds and nitrophenols are formed).

Nitration of unsaturated aliphatic compounds—for example, by a mixture of acetic anhydride and nitric acid—starts with an attack by a nitronium cation on a double bond; the cation thus formed (III) is stabilized by the splitting-off of a proton, with the formation of the nitroolefin (IV), or by addition of the anion X–, which is present in the reaction mixture:

The reaction products are usually mixtures of nitro compounds. The nitration of unsaturated compounds by nitrogen dioxide in inert solvents takes place by a radical mechanism, for example,

The process is also complicated by the formation of mixtures of various products.

Nitration of paraffin hydrocarbons by dilute nitric acid was first accomplished by the Russian chemist M. I. Konovalov in 1888. Nitration of alkanes by nitrogen oxides or concentrated nitric acid takes place primarily by a radical mechanism:

Nitration of aliphatic compounds is usually accompanied by processes of oxidative degradation, leading to the formation of mixtures of nitro compounds and oxygen-containing compounds.

The nitration reaction entails the danger of explosion. Industrial nitration is carried out in special anticorrosive nitrators under carefully controlled conditions; the processes are fully automated.