The first chemical nomenclature was developed in 1787 by a commission of French chemists under the chairmanship of A. L. Lavoisier. Before that, a substance was named according to arbitrarily chosen criteria, for example, the method of production, the name of the discoverer, or some property. Several synonymous names existed for each substance. The Lavoisier commission determined that each substance have only one name, which was to be easily pronounceable and not contrary to the rules of the language. Names of complex substances consisted of two words, one to indicate the class of compound and the other to identify the chemical species. In the beginning of the 19th century, national systems of chemical nomenclature, including the Russian system, were modeled on the nomenclature that had been proposed by the French scientists, which was based on the oxygen theory (seeOXYGEN).

The modern nomenclature of inorganic and organic compounds was developed by international commissions, with the ambitious goal of expressing in words all the information contained in chemical formulas. In using the international chemical nomenclature, it is worthwhile to recall the words of A. M. Butlerov, written in 1859, concerning Russian chemical nomenclature: “although it [Russian nomenclature] agrees with the rules of general chemical nomenclature, Russian chemists still use the Russian names that developed from the everyday language” (Soch., vol. 3, 1958, p. 143). In 1869, D. I. Mendeleev wrote that “one should not be absolutely consistent in the matter of nomenclature: there are certain conventions …, which cannot be ignored without risking a loss of clarity, even among those who are accustomed to the style of chemical discourse. Of the several names that have been derived on the basis of varying degrees of rationality, one should choose … not only those names that most clearly render the features and composition of the given compound but also those names that are not disturbing in their awkwardness” (Soch., vol. 13, 1949, p. 283).

The fundamentals of the nomenclature that is presented below

were compiled from the scientific and educational literature. These fundamentals reflect the transitional state of the nomenclature in the 1960’s and early 1970’s.

The names of the chemical elements are the basis of the nomenclature of inorganic compounds (seeCHEMICAL SYMBOLS). As a rule, the name of a compound consists of two words: one specifying the class of the compound, and one the chemical species. For example, in the name “sulfuric acid” the noun “acid” indicates the class of the compound—an acid—while the adjective “sulfuric” indicates that this acid is formed from a sulfur atom that is in the highest oxidation state. “Sodium sulfate” identifies this compound as a sodium salt of sulfuric acid.

In both the international and Russian nomenclatures, the names of radicals—atomic groups that are transferred intact from one compound to another—consist of the Latin names for the elements and the suffix -il (-yl). Examples of such terms are gidroksil (hydroxyl) for the OH radical and karbonil (carbonyl) for CO. The historical names ammonii (ammonium) for NH4, tsian (cyan) for CN, rodan (thiocyanogen) for CNS, and amid (amide) for NH2 are retained.

Peroxides—compounds in which oxygen atoms are bound both to each other and to more electropositive elements—are called peroksidy, or perekisi. For example, hydrogen peroxide has the structural formula

The aqueous solutions of compounds that consist of hydrogen bound to a nonmetal are acidic. The names of such compounds consist of the root of the Russian name of the nonmetal combined with the word vodorod (hydrogen). For example, hydrochloric acid, HCl, is called khlorovodorod, and hydrogen sulfide, H2S, is called serovodorod. The historical names of the other simple compounds of nonmetals with hydrogen have been retained. These include voda, H2O (water); ammiak, NH3 (ammonia); fosfin, PH3 (phosphine); arsin, AsH3 (arsine); metan, CH4 (methane); silan, SiH4 (silane); and boran, BH3 (borane). Hydrides—the compounds of hydrogen with metals—are termed gidridy. These include gidrid litiia, LiH (lithium hydride), and gidrid kal’tsiia, or digidrid kal’tsiia, CaH2 (calcium hydride). Hydrides are sometimes called vodorodistye metally (literally, hydrogenous metals).

Two acids that contain different numbers of water molecules but whose elements are in the same oxidation state are distinguished by the prefix orto- (ortho-) for more hydrated acids and meta- for less hydrated acids. Examples are fosfornaia ortokislota, H3PO4 (orthophosphoric acid), and fosfornaia metakislota, HPO3 (metaphosphoric acid). Acids containing more than one atom of the acid-forming element in the same oxidation state are called izopolikisloty (isopoly acids). The number of atoms of this element are usually given by a Russian prefix, although a Greek prefix is sometimes used. Examples are dvusernaia kislota, H2S2O7 (disulfuric acid); trikhromovaia kislota, H2Cr3O10 (trichromic acid); and chetyrekhbornaia kislota, or tetrabornaia kislota, H2B4O7 (tetraboric acid). The term pirokislota (pyroacid) is no longer used.

The names of salts in the international nomenclature consist of the name of the anion in the nominative case and the name of the cation in the genetive case. Anions of oxy acids are named by combining the root of the Latin name of the acid-forming element and the suffixes -at (-ate) or -it (-ite). The suffix -at indicates a higher oxidation state of the acid-forming element, while the suffix -it indicates a lower oxidation state. For example, the sulfate ion, SO42-, is called sul’fat-ion, and potassium sulfate, K2SO4, is called sul’fat kaliia; the sulfite ion, SO32-, is called sul’fit-ion, and sul’fit natriia is the term for sodium sulfite, Na2SO3.

Organic compounds. In the initial period of the development of organic chemistry, compounds received random, trivial names on the basis of their natural sources, characteristic properties, or the names of scientists. Some such names have been retained up to the present.

The nomenclature of organic compounds should reflect the compounds’s chemical structure. The names—which can be very complex—should be derived according to definite rules from terms for the simple component parts. A number or letter should indicate the arrangement of these components. The first systematic nomenclature was gradually compiled during the second half of the 19th century. Systematic names of organic compounds are derived from the name of a simple—though not necessarily initial—member of a homologous series. The name is completed by indicating the additional moieties and other structural elements. The positions of these additional moieties are indicated by Greek letters. The following names may serve as examples (the molecular fragment that is the basis of the name is indicated by dashed lines in the structural formulas): 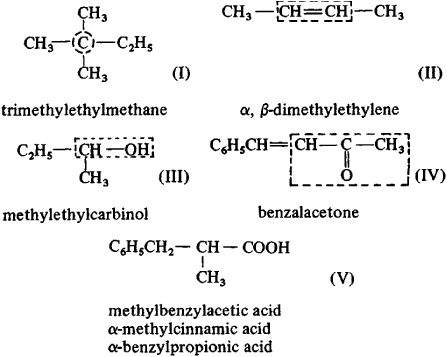 One compound may have several systematic names, depending on the fragment selected as the basis of the name, as in example (V).

A rational system of names in part based on functional groups has become the modern nomenclature of organic chemistry. The system was devised by the International Union of Pure and Applied Chemistry (IUPAC) and was adopted in the 1950’s and 1960’s. The IUPAC rules also use the names of the substituent features of a compound; the substituent names are a further development of the Geneva and Liège nomenclatures.

The basis for naming a compound by the IUPAC rules lies in the main hydrocarbon chain and the main functional group (see Table 3 for functional groups). Additional moieties, multiple bonds, and other functions are indicated by special prefixes and suffixes. The number of such additional moieties is given by numerical prefixes, for example, di-, tri-, and tetra-; the position of the moieties is given by the number of the main-chain atom to which the moiety is attached. The main hydrocarbon chain is named according to the root of the name of the corresponding hydrocarbon: names of single-carbon chains are based on the root “methan”; two-carbon chains, on “ethan”; three-carbon chains, on “propan”; four-carbon chains, on “butan”; and five-carbon chains, on “pentan.” The nature of the carbon-carbon bonds in the main chain is indicated by suffixes: “-ane” denotes a saturated chain; “-ene,” a double bond; and “-yne,” a triple bond. The side chains are named on the basis of the corresponding radicals. The compounds diagramed above are named differently according to the IUPAC nomenclature: trimethylethylmethane is 2,2-dimethylbutane, α, β-dimethylethylene is butene-2, methylethylcarbinol is butanol-2, benzalacetone is 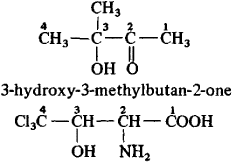 The names of alicyclic, aromatic, heterocyclic, and organoele-mental compounds and of stereoisomers are derived according to similar rules. The internationally accepted system specifies that the noncarbon atoms in the chain be indicated by Latin roots with the ending “a.” Two examples follow, with the roots “dioxa-” and “aza-”:

The IUPAC rules do not specify details for writing names; matters such as word breaks, the position of numerical elements, and the use of commas or periods are left to the discretion of each individual country, in accordance with the rules and traditions of the native language.