in mathematical statistics, methods of directly estimating a theoretical probability distribution and various general properties of the distribution, such as the symmetry of the distribution, based on results of observations. The term “nonparametric methods” emphasizes that such methods differ from classical (parametric) methods; in classical methods, it is assumed that (1) an unknown theoretical distribution belongs to some family that depends on a finite number of parameters (for example, a family of normal distributions), (2) unknown values of these parameters can be estimated according to results of observations, and (3) various hypotheses about these unknown values can be tested. The development of nonparametric methods was due, in large part, to Soviet scientists.

As an example of a nonparametric method we may take the method obtained by A. N. Kolmogorov for verifying the agreement of theoretical and empirical distributions (called the Kolmogorov test). Suppose the results of n independent observations of some quantity that has distribution function F (x) are obtained. Let Fn(x) denote the empirical distribution function constructed in terms of these n observations and let Dn denote the largest absolute value of the difference Fn(x) —IF (x). If F (x) is continuous, then the random variable

has distribution function Kn (λ) (X), which is independent of F (x) and approaches the limit

is obtained for sufficiently large n, where pn,Λ is the probability of the inequality

. The function K (λ) has been tabulated. Its values for some λ are presented in Table 1.

The approximation (*) is used in the following way to verify the hypothesis that an observed random variable has distribution function F (x). First we find the value of the variable Dn in terms of results of observations. Then, using equation (*), we calculate the probability of obtaining a deviation of Fn from F that is greater than or equal to the observed value. If this probability is sufficiently low, the hypothesis is rejected, in accordance with general principles for testing statistical hypotheses. Otherwise, it is assumed that the results of a trial do not contradict the hypothesis. The hypothesis as to whether two independent samples of size n1 and n2, respectively, are obtained from the same

general set with a continuous distribution law is similarly verified. In this case, the approximation (*) is replaced by the statement that the probability of the inequality

has limit k (λ), which was established by N. V. Smirnov; here,

is the largest absolute value of the difference

Methods of testing the hypothesis that a theoretical distribution belongs to a family of normal distributions constitute a second example of nonparametric methods. We note here only 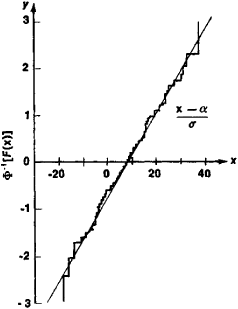 one of these methods, the normal plot. This method is based on the following idea. If the random variable X has a normal distribution with parameters α and σ, then

where Φ-1 is the function inverse to the normal distribution

Feedback
Flashcards & Bookmarks ?
Please log in or register to use Flashcards and Bookmarks. You can also log in with
Flashcards ?
My bookmarks ?
+ Add current page to bookmarks
Mentioned in ?
References in periodicals archive ?
The situations for which nonparametric methods are commended vary, and include correlation, regression, and more, but I concentrate on the comparison of two means.
Statistical sirens: the allure of nonparametrics
Two commonly used nonparametric methods are the actuarial life-table estimator and the Kaplan-Meier product limit estimator.
Vocational rehabilitation outcome measures: the probability of employment and the duration of periods of employment
First, we constructed the best theoretical bounds on the index by applying nonparametric methods, using algorithms developed by Hal Varian.
Measuring substitution bias in price indexes
The authors have organized the main body of their text in seven chapters devoted to mathematical descriptions of nonlinear mixture models, label switching and trapping, treatment of mixture models with an unknown number of components, applications of BDMCMC, KLMCMC, and RPS, nonparametric methods, and a variety of other related subjects.
Nonlinear Mixture Models: A Bayesian Approach
In general, parametric methods may offer the better estimates if the data closely agrees with the assumed model; otherwise, nonparametric methods are better.
TerraSAR-X StripMap data interpretation of complex urban scenarios with 3D SAR tomography
For the data without prior knowledge, nonparametric methods are known as a better solution than the statistical (parametric) methods [8-10].
Outlier detection method in linear regression based on sum of arithmetic progression
Moreover various parametric stability analysis methods, several nonparametric methods of stability have been suggested.
Genotype by environment interaction and oil yield stability analysis of six sunflower cultivars in Khoy, Iran
He first discusses the relationship between biostatistics and medical research and the significance of statistical methods in medical literature and clinical trials research, then correlation, regression, and logistic regression; diagnostics; estimating means and proportions; normal distribution and the central limit theorem; sampling from populations; contingency tables; meta-analysis; nonparametric methods; hypothesis testing; and survival analysis.
The essentials of biostatistics for physicians, nurses, and clinicians
While parametric methods are based on a process model, nonparametric methods are based on the calculation of autocorrelation function, and the calculation of the Fourier transform.
Application of non-parametric methods for monitoring of tool chipping
The last section of the two-semester undergraduate textbook discusses sampling theory, statistical inference, estimation, hypothesis testing, regression analysis, probability model validation, and nonparametric methods. The CD-ROM contains data sets and a 30-day trial version of MINITAB.
Random phenomena; fundamentals of probability and statistics for engineers. (CD-ROM included)
Nonparametric methods make no assumptions about the functional form of the reference distribution.
Centile charts I: new method of assessment for univariate reference intervals