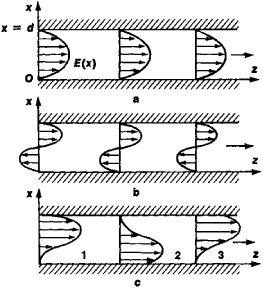 Figure 1. Propagation of two normal waves (a) and (b) and the wave (c) produced by their superposition. In cross sections (1) and (3) the phase difference of the normal waves is ϕ = 0, and they are added, but in cross section (2) ϕ = –π, and the second wave is subtracted.

The number N of normal waves that can propagate in the systems mentioned above depends on the ratio of the wavelength λ and the transverse dimensions d of the system. For waves of a given frequency, this number is always finite, and the value of N increases with an increase in the ratio d/λ. At very low frequencies (that is, when d/λ ≪ ½), only one normal wave of a given type can propagate, and in some systems, such as hollow radio-frequency wave guides, the propagation of low-frequency normal waves is absolutely impossible. The phase and group velocities of the different types of normal waves are different (this, in particular, explains the distortion of the transverse field structure when several normal waves are superposed, as in Figure 1). Therefore, it is desirable to use only one type of normal wave in the transmission of information.

Surface normal waves may propagate along the interface between two media. Examples are Rayleigh waves on the boundary of an elastic body (Figure 2) and slow electromagnetic waves in slow-wave structures. In the case of normal waves in multiwire coupled transmission lines, which are used in communications technology, the ratio of the oscillation amplitudes in the separate conductors, rather than the transverse field distribution, is preserved along the direction of propagation.

Finally, normal waves in infinite and homogeneous continuous media are plane waves, which preserve their polarization

Figure 2. Propagation of a Ray-leigh wave on the boundary of an elastic body

during propagation. For example, both the ordinary and extraordinary waves in uniaxial crystals are normal waves. The waves are linearly polarized in mutually perpendicular directions, and their polarizations in the direction of propagation are preserved (Figure 3), whereas the polarization of an arbitrarily polarized wave varies from point to point. Other examples of normal waves in continuous media are plane elastic waves, elliptically polarized electromagnetic waves in a magnetic plasma, and circularly polarized waves in optically active media. 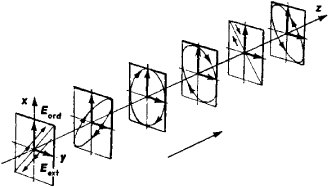 Figure 3. Propagation of ordinary and extraordinary waves in uniaxial crystals

Feedback
Flashcards & Bookmarks ?
Please log in or register to use Flashcards and Bookmarks. You can also log in with
Flashcards ?
My bookmarks ?
+ Add current page to bookmarks
Mentioned in ?
References in periodicals archive ?
There was damage at 100ft above sea level on the platform, so you have the Atlantic running mad for several days and pretty good anecdotal evidence that there are freak waves two or three times the height of normal waves.
Mystery of the three lighthouse keepers; AS FILM HITS SCREENS, WHAT REALL LY HAPPENED ON HAUNTED ISLAND?THE SATURDAY BIG READ
It is generally known that in a lossless MCML consisting of N conductors, N normal modes (or normal waves) can be propagated (Tripathi, Lee 1989).
Synthesis of multiconductor microstrip lines operating in normal modes/Daugialaides mikrojuostelines linijos, veikianncios normaliuju bangu rezimu sinteze
"In such structures, electromagnetic waves are coupled to electron plasma in the metal, which gives rise to their special name--plasmons." Unlike normal waves in dielectric media, such as air, plasmons can be focused or concentrated into spatial regions that are much smaller than the wavelength (which is called sub-wavelength localisation).
Nanotechnology boosts airport security innovation
The combination of storm-surge caused coastal flooding and larger than normal waves can quickly devastate an area.
Virginia's programs and practices for shoreline erosion control
As normal waves propagate, they spread out according to the laws of diffractions.
Making waves that travel like beams
It is known, that, generally, in a lossless MMCL consisting of (N - 1) conductors can propagate N normal waves (or normal modes), which are characterized by N propagation factors [[beta].sub.t] and [N.sup.2] characteristic impedances [Z.sub.ki] (where k is type of normal mode; i is conductor number) [14].
Phase and group velocities of different types of normal waves differ from each other in the MMCL, as a result the interference of the propagated normal waves occurs in the MMCL and transmitted signals suffer from distortions.
Synthesis of six-conductors symmetrically coupled microstrip line, operating in a normal mode/Simetriskai susietu sesiu laidininku mikrojuostelines linijos, veikiancios iiormaliuju bangu rezimu, sinteze
By contrast, the normal waves you see at the beach, which are caused by wind and tides, travel relatively slowly and are only one to two meter's deep.
Waves of terror
For example, normal waves pass right through each other undisturbed.
Relativity by the numbers: supercomputers help physicists picture collapsing stars and gravitational waves
For flooding to occur on open coastlines, an extra factor is needed to add to the height of the sea surface in addition to normal waves and tides, and severe meteorological conditions can provide this in the form of a sea surge.
UK Tidal Surge Pathway: When and Where North Sea Flooding Will Hit East Coast
It is known, that, generally, in an MMCL consisting of N conductors (plus ground plane), N normal waves (or normal modes) can propagate [7].
Modelling various microwave devices by the multiconductor line approach it is enough to confine to two main normal waves only [9].
Parallel algorithm for the quasi-tem analysis of microstrip multiconductor line/Lygiagretusis algoritmas mikrojuostelinems daugialaidems linijoms tirti esant kvazistatiniam artiniui