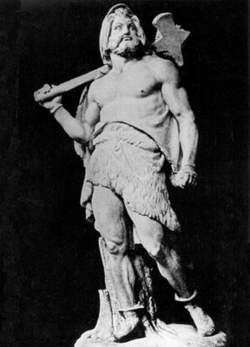 Statue of Thor, Norse god of thunder, by B. E. Fogelberg. Thor is also the god of the common man who is called on for protection, health, agriculture, and justice. Fortean Picture Library.

A lot of early Norse religion is forever lost to us. Without a written record we can only speculate about what the Germanic and Slavic people of northern Europe thought of the hereafter, and about their interaction with gods and goddesses who appear briefly in the writings of early Christian monks.

But the time of the Vikings is recalled in the sagas written down by Snori Sturlson at the beginning of the thirteenth century. These sagas are full of heroic tales about Odin, Thor, and the Valkyries. They reveal a pre-Christian insight into the religion of the hardy Norsemen and -women.

The Norse pantheon was as rich and populated as that of Canaan, Babylon, and Egypt. But a few Norse gods and goddesses have been enshrined in popular imagination, thanks to the many paintings based on oral legends of the time and on the decorative beauty and grace of the famous dragon ships of Viking lore.

Norse theology was rich in ring lore—the famous Rings of Power that gave the bearer insights, strength, and magical abilities. They would bring good gifts if used wisely, but tragedy if they were used for greed or corruption. The plot of Richard Wagner's famous opera cycle, The Ring of the Nibelung, involves such a ring. The hero, Siegfried, won the cursed ring, Andvarinaut, after slaying the dragon, Fafnir. Although he himself was innocent, Siegfried got caught up in a tragedy involving Brynhild, the fallen Valkyrie. This tale inspired some of the greatest Wagnerian music ever written.

One-eyed Odin is the father of the gods and men. He is usually pictured wearing either a floppy hat, which makes him look something like author J. R. R. Tolkien's character Gandalf, or his famous horned Viking helmet. He keeps watch over the nine realms of the Nordic world with the help of his two ravens, Huginn and Munin ("Thought" and "Memory"), who fly daily through the heavens and return with the latest news. Odin is married to Frigga, the mother of all, who spins out daily life on her sacred distaff and knows the future. At least she says she does. No one knows for sure because she never tells anyone what it is.

They have a son named Baldur who is an interesting bridge to Christianity. He lived in Asgard, the home of the gods, with his wife, Nanna, goddess of joy. But he was sacrificed one midsummer when his half-brother Hodur, guided by Loki, the trickster,

killed him with a dart made out of mistletoe. He will be reborn at Jul ("Yul") and cleanse Earth of evil at the end of time. Thus we see another religion wherein the good son of God is sacrificed by his evil counterpart, only to return in Messiahlike fashion to straighten things out in the end.

Odin is the god who gathers up the faithful who die in battle, transporting them to the great hall in Valhalla, where they will be available to fight in his army at the final battle of Ragnarok. Many of those fallen faithful were called berserkers, warriors who gave rise to the term "going berserk" because of their ritual battle lust and shield-biting frenzy.

We still remember Odin each week. Wednesday, which comes from the word Wodensdaeg, "Wodin's day," is his sacred day.

To gain knowledge and power, Odin once crucified himself, hanging for nine days on Yggdrasil, the World or Cosmic Tree, and cast his eye into Mimir's well in return for a drink that bestowed "immense wisdom." The parallels with Christianity—crucifixion and the "water of life"—have provoked a lot of interest.

Thor, the "Thunderer," was Odin's son. In some cultures he supplanted Odin as the favorite god. He was the one who produced thunder and lightning when he wielded his mighty hammer, Mjollnir. He is the personification of strength, and his chariot is pulled across the sky by two goats. Thor is the rugged individualist, prototype of the fierce Viking warrior. Thursday (Thorsdaeg, "Thor's day") is his sacred day.

Freyja is the goddess of love and beauty, which works out well because her twin brother Freyr is the horned god of fertility—a fortunate combination. Whereas both Odin and Thor were of the race of gods known as the Aesir, Freyja and Freyr are of the race known as the Vanir. The Vanir were thought to have been older than the Aesir, and the two races fought at first. But they made peace long enough to see the Vanir begin to fade. And that was a pity, because they were the ones associated with wealth, peace, and good weather. Apparently, as the Norse began to raid farther and farther afield, warlike tendencies replaced more peaceful pursuits.

Freyja is the queen of the Valkyries. The cat is her symbol, and her prized possession was the necklace Brisingamen, a gift she obtained when she slept with the four dwarves who made it. Friday (Frejyasdaeg, "Freyja's day") is her sacred day (though some say the day is named after Frigga, Odin's wife).

Freyja's brother Freyr is known as the King of the Elves. The boar is his sacred animal, and Gullenbursti, the "Golden Boar" or sun, is seen each morning at sunrise. Both the English and the Swedish are said to be his descendants.

Loki is the trickster as well as the god of fire. He is neither Aesir nor Vanir but comes from the race known as Ettins ("elementals"). As a result, he has both demonic and helpful qualities. On the one hand, he is capable of giving the gods fits. But sometimes he gets them out of trouble when they need a practical hand adjusting the weather or dealing with daily life in the world. He also creates some of the meanest monsters ever seen on the face of the earth.

These are the fates. They determine the orlogs ("destinies") of both gods and humans, and they take care of Yggdrasil, the Sacred World or Cosmic Tree.

Hel is, as you might guess, the goddess of the afterlife. The Norse picture her as half dead and half alive, and view her, understandably, with great trepidation.

There are many other gods in the pantheon. Bragi is the bard and muse of poetry. Weiland is a smith and crafter of Odin's sword. Eostre (a good candidate for the root of the name Easter, the Christian spring holiday of Resurrection) is the goddess of spring and fertility. Her symbols are the Eostre bunny and Eostre egg. Also from this religious mythology come the stories of Beowulf, dwarves, elves, and the legend of Baba Yaga.

Did the Vikings ever carry any of these myths to America, leaving only stories, some runes, and blue-eyed children as evidence of their journey? Well, there are American Indian legends strikingly similar to some of these stories, and tales of blond, blue-eyed, metal-shirted gods are found from the Mississippi River valley and western Oklahoma all the way to Canada. There is even an interesting European DNA gene found in some New England Algonkian tribal ancestors. But until definitive archaeological proof is found, the legends remain mysteries lost in the mists of time.

Feedback
Flashcards & Bookmarks ?
Please log in or register to use Flashcards and Bookmarks. You can also log in with
Flashcards ?
My bookmarks ?
+ Add current page to bookmarks
References in periodicals archive ?
In Norse mythology apples were associated with eternal youth, since their Goddess Idunn -the keeper of the orchard and Goddess of the Spring-fed the precious apples to the Norse Gods and Goddesses to provide them with immortality.
Apple mythology: folklore and seasonal traditions
Encyclopedia browser ?
Full browser ?
CITE
Site: Follow: Share:
Open / Close