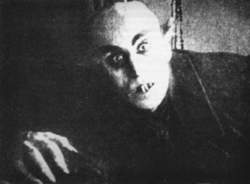 Feedback
Flashcards & Bookmarks ?
Please log in or register to use Flashcards and Bookmarks. You can also log in with
Flashcards ?
My bookmarks ?
+ Add current page to bookmarks
Mentioned in ?
References in classic literature ?
Friend Arthur, if you had met that kiss which you know of before poor Lucy die, or again, last night when you open your arms to her, you would in time, when you had died, have become nosferatu, as they call it in Eastern europe, and would for all time make more of those Un-Deads that so have filled us with horror.
View in context
He considers Dracula in films and television series from Nosferatu from 1922 to The Strain (2014-2017), showing how anxieties around the declining British Empire in the 19th century parallel those of the troubled American Empire in the early 21st century and their constructions of otherness.
Dracula as Absolute Other: The Troubling and Distracting Specter of Stoker's Vampire on Screen
German Director F.W.Murnau's silent film "Nosferatu" will be screened during this event.
Third "Saha Chribtek, Festive Ramadan Nights," May 23-June 1
"NOS4A2" (think "Nosferatu" on a license plate) stars nerd icon Zachary Quinto ("Star Trek," "Heroes") as Charlie Manx, the vampiric villain of the 2013 novel upon which the new series is based.
Catch two sneak peeks from AMC at C2E2
Going to the castle where Nosferatu was filmed was an extra treat for Paul - more than the plate of haluscaronky, which, Paul and Lynette admit, is not for everyone.Subscribe to Spectacular Slovakia for free: class="article-published 22.
Spectacular Slovakia #23: Visit the Nosferatu castle in Orava
The bats even put in an appearance during the evening screening of the 1922 German vampire film Nosferatu as part of the Whitley Bay Film Festival last Friday.
Rare bats roosting at historic hall
The Quartet are back again on January 19 with Friedrich Murnau's iconic Nosferatu set to an original score composed by Baudime Jam.
enLIVE 3 makes some noise for silent film
Some of its most notable projects include Pixel Puzzles Ultimate, The Culling Of The Cows, Nosferatu: The Wrath of Malachi, and others.
DMarket Partners with KISS, Ltd.
THEATRE Medusa Following the success of Nosferatu at the Brindley Theatre, innovative storytellers and theatre-makers proper Job Theatre Company collaborate with award-winning writer Helen Mort to re-tell this classic myth from the point of view of Medusa, as the second part of the Monster Trilogy.
48 next hours MUSIC, THEATRE, COMEDY AND MORE ... FOUR PAGES OF LISTINGS START HERE
0844 338 5000 cinema Frankenstein (1910) and Nosferatu (1921) The historic Town Hall organ will send shivers down your spine during this Halloween silent movie double bill.
48 hours BIRMINGHAM HOT LIST YOUR NEXT
Nosferatu: A Symphony of Horror was perhaps meant to be best enjoyed in the dark of a theatre, accompanied by an accomplished live ensemble tearing into a soaring symphony.
QPO brings a classic horror film to life