(zhäN no͞ovĕl`), 1945–, French architect, grad. École des Beaux-Arts, Paris (1971). He opened his own firm in 1975, and became known for innovative techniques, the use of modern materials, and for eschewing a signature style and letting the site, intended use, cultural background, and other factors dictate the nature of his buildings. Nouvel achieved international recognition for his Arab World Institute, Paris (1987), with its curving etched glass wall and a facade with automated light-adjusting apertures arranged in patterns that recall Arab grillework. Other buildings include the Fondation Cartier, Paris (1994), a modernist steel-and-glass rectangle; the cantilevered Culture and Congress Center, Lucerne (1999); the Dentsu Building, Tokyo (2002), a knife-edged high-rise; the candy-hued, aggressively vertical Agbar Tower, Barcelona (2005); the Guthrie Theater, Minneapolis (2006), composed of piled, boxy shapes clad in deep blue metal; the Musée du Quai Branly, Paris (2006), with its strange angles, long glass wall, and vividly colored components; the Paris Philharmonic (2015), with a "vineyard-style" concert hall and an exterior resembling enormous layered, patterned slabs; the Louvre Abu Dhabi (2017), whose silvery latticework dome is surrounded by differently shaped galleries; and the National Museum of Qatar, Doha (2019), whose exterior's large sand-colored disks are stacked, scattered, and jumbled by the waterfront. Nouvel was awarded the Pritzker PrizePritzker Prize,
officially The Pritzker Architecture Prize
, award for excellence in architecture, given annually since 1979. Largely modeled on the Nobel Prize, it is the premier architectural award in the United States and is named for the family that founded the
..... Click the link for more information.  in 2008. 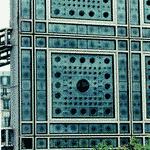