The moon is the earth's nearest neighbor in space.
..... Click the link for more information.  on the earth's equatorial bulge. However, the period of the motion is only 18.6 years, the same as that of the precession of the moon's nodes, as opposed to the nearly 26,000-year period of the precession of the equinoxes. Nutation was discovered by the English astronomer James Bradley in 1728 but was not explained until 20 years later.
The Columbia Electronic Encyclopedia™ Copyright © 2013, Columbia University Press. Licensed from Columbia University Press. All rights reserved. www.cc.columbia.edu/cu/cup/

In mechanics, a bobbing motion that accompanies the precession of a spinning rigid body, such as a top. In simple precession, the axis of a top with a fixed point of contact sweeps out a cone, whose axis is the vertical direction. In the general motion, the angle between the axis of the top and the vertical varies with time. This motion of the top's axis, bobbing up and down as it precesses, is known as nutation. See Rigid-body dynamics

Astronomical nutation refers to irregularities in the precessional motion of the equinoxes caused by the varying torque applied to the Earth by the Sun and Moon. Astronomical nutation should not be confused with nutation as defined in mechanics; the latter is present even if the source of the torques is unvarying.

(new-tay -shŏn) A slight periodic but irregular movement superimposed on the precessional circle (see precession) traced out by the celestial poles. It results from the varying distances and relative directions of the Moon and Sun, which continuously alter the strength and direction of their gravitational attraction on the Earth. The primary component is lunar nutation, which causes the celestial pole to wander by ±9 arc seconds from its mean position in a period of 18.6 years.

Changes in right ascension and declination arising from precession are perceptibly modified by nutation.

a motion of a rigid body that occurs at the same time as a precession and during which the angle between the body’s axis of spin and the axis around which the body precesses changes. 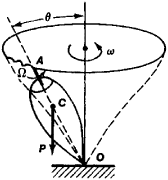 In a gyroscope—for example, a top—moving under the influence of the force of gravity P (Figure 1), nutation is an oscillation of the gyroscope’s axis such that the amplitude and period decrease and the frequency increases as the angular velocity Ω of spin of the gyroscope increases. For large Ω, the amplitude θ1 – θ0 and the period τ of nutation are given approximately by

Nutation of a gyroscopic system, that is, a mechanical system containing gyroscopes, is the periodic change in the angles determining the position of the system that occurs with small amplitudes and high frequencies. Because of the presence of resistance in the form of friction, nutational oscillations are damped rather quickly, whereupon the gyroscope or gyroscopic system carries out a purely precessional motion.

In astronomy, nutation denotes the small oscillations in the earth’s axis that are superimposed on the precessional motion of the axis. Discovered in 1737 by J. Bradley, these oscillations are called lunisolar, or forced, nutation and are caused by variations in the pull of the moon and the sun on the equatorial bulge of the rotating earth. The bulge is a consequence of the earth’s oblateness.

The perturbing effects of the moon and the sun cause forced oscillations of the earth’s axis that may be viewed as a superposition of simple oscillations with different periods and amplitudes. Nutation causes a variation in the position of the vernal equinox on the ecliptic, which results in a corresponding change in ecliptic longitude—a phenomenon called nutation in longitude. The ecliptic latitude, however, remains constant. Nutation gives rise to a change in the inclination of the ecliptic to the equator, or nutation in obliquity, and the equatorial coordinates of celestial bodies are changed. The largest oscillation is caused by the variation, which exceeds 10°, in the inclination of the moon’s orbit to the earth’s equator. This variation is associated with the regression of the lunar nodes. Thus, the basic nutational period is equal to 18.6 years, the period of rotation of the line of nodes. The corresponding principal nutation terms are equal to +9.21” cos Ω (nutation in obliquity) and –17.23” sin Ω (nutation in longitude), where Ω is the mean longitude of the ascending node of the moon’s orbit on the ecliptic.

An accurate expression for nutation given in 1953 by the American astronomer E. Woolard contains 109 periodic terms, which depend on the mean longitude of the moon, the ascending node and perigee of the lunar orbit, the mean longitude of the sun, and the perigee of the sun’s geocentric orbit; this expression is used in the compilation of astronomical almanacs. Nutation causes the true celestial pole to describe a wavy curve on the celestial sphere. The position of the mean (moving only because of precession) and the true (moving because of both precession and nutation) celestial poles is shown in Figure 2. The coordinates of celestial bodies in a coordinate system that takes nutation into account conform to the true positions of the celestial bodies. Astronomical almanacs contain auxiliary values that facilitate calculations involving precession and nutation.

Free nutation of the earth’s axis results when the earth as a whole is displaced in space relative to its axis of rotation.

in plants, the rotational movement of the apexes of growing organs, most distinctly expressed in twining plants. Nutations are growth movements caused by uneven growth of various parts of plant organs. Organs with radial structure rotate in a circle; those with dorsoventral structure rotate in an ellipse. Nutation is characteristic of stems, flower stalks, roots, leaves, coleoptiles, antennae, stolons, and other organs of higher plants. The sporangiophores of lower plants also exhibit nutation.

[nü′tā·shən]
(astronomy)
A slight, slow, nodding motion of the earth's axis of rotation which is superimposed on the precession of the equinoxes; it is the combination of a number of perturbations (lunar, solar, and fortnightly nutation).
(botany)
The rhythmic change in the position of growing plant organs caused by variation in the growth rates on different sides of the growing apex.
(mechanics)
A bobbing or nodding up-and-down motion of a spinning rigid body, such as a top, as it precesses about its vertical axis.
McGraw-Hill Dictionary of Scientific & Technical Terms, 6E, Copyright © 2003 by The McGraw-Hill Companies, Inc.

i. The slow back-and-forth oscillations of an axis of a spinning gyroscope or any other rotating body.
ii. The irregularities in the precessional motion of the equinoxes caused by varying positions of the moon, and to a lesser extent, of other celestial bodies with respect to the ecliptic. As the moon and other bodies change their positions relative to the earth, their distances also change. The strength and lines of action of the gravitational forces also change, causing fluctuations in the precessional torque acting on the earth.
An Illustrated Dictionary of Aviation Copyright © 2005 by The McGraw-Hill Companies, Inc. All rights reserved