name applied to members of the family Myristicaceae. The true nutmeg (Myristica fragrans) is an evergreen tree native to the Moluccas but now cultivated elsewhere in the tropics and to a limited extent in S Florida. The fruit is the source of two spices of commercial value: whole or ground nutmeg, from the inner seed; and mace, from the fibrous aril (seed covering) that separates the seed from its thick outer husk. It also supplies butters and an essential oil used in medicines, toilet preparations, and dentifrices. Other trees of the Myristica genus, also called nutmegs, are of a limited use commercially. Several species of the tropical American genus Virola are valuable for timber (e.g., V. surinamensis) and the red resinous sap of some others is boiled down, powdered, and made into a hallucinogenic snuff by some Amazonian indigenous peoples. Connecticut is called the Nutmeg State. Nutmeg is classified in the division MagnoliophytaMagnoliophyta
, division of the plant kingdom consisting of those organisms commonly called the flowering plants, or angiosperms. The angiosperms have leaves, stems, and roots, and vascular, or conducting, tissue (xylem and phloem).
..... Click the link for more information. , class Magnoliopsida, order Magnoliales, family Myristicaceae. 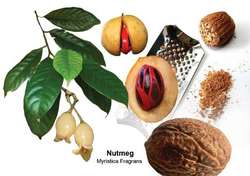 Common spice considered to be an aphrodisiac in many cultures. Source of myrisiticin, a mild central nervous system stimulant and euphoric. Some people grind down a nut for fresh nutmeg and take it as a way to get high. Be aware large doses are poisonous and can cause miscarriage. As an intoxicant, can lead to hallucinations, delirium and days of nausea and headaches. Used as an anti-parasitic. A small amount of nutmeg, about the size of a pea, can be taken once daily for a year to relieve chronic nervous problems, as well as heart problems stemming from poor circulation.

[′nət‚meg]
(botany)
Myristica fragrans. A dark-leafed evergreen tree of the family Myristicaceae cultivated for the golden-yellow fruits which resemble apricots; a delicately flavored spice is obtained from the kernels inside the seeds.

1. an East Indian evergreen tree, Myristica fragrans, cultivated in the tropics for its hard aromatic seed: family Myristicaceae
2. the seed of this tree, used as a spice
3. any of several similar trees or their fruit
4. a greyish-brown colour

1. an East Indian evergreen tree, Myristica fragrans, cultivated in the tropics for its hard aromatic seed: family Myristicaceae
2. any of several similar trees or their fruit