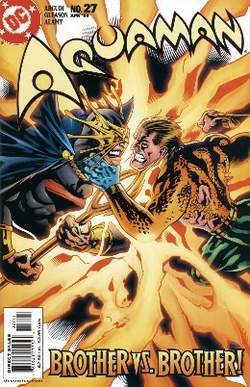 (pop culture)
“Aquaman a coward?” queried the cover of DC Comics' Aquaman vol. 1 #29 (1966), as the valiant Sea King refused to fight a weirdly garbed marine terrorist cloaked in royal purples, a cape, and a bizarre fish-fin helmet. “Aquaman, Coward-King of the Seas!” by writer Bob Haney and artist Nick Cardy introduces the Ocean Master, a supercilious pirate who holds the seas hostage. From his golden “Manta-Ship”— bubbling with destructive blasts, an antigravity beam, heat-sensing torpedoes, and a harpoon-firing “killer-craft” mini-sub—he bullies ocean liners and the U.S. Navy. Although Ocean Master repeatedly tries to deep-six Aquaman and his sidekick Aqualad, the Sea King won't allow any harm to befall this brigand, roiling Aqualad to angle an explanation from his mentor: Ocean Master is actually Aquaman's resentful, mortal half-brother Orm Marius. A head injury made Orm forget his kinship to Aquaman but not his hatred, and with technological devices he became the ominous Ocean Master, affording the Sea King the personal dilemma, “How can I fight a foe who is my own flesh-and-blood?” The Aquaman/Ocean Master brother-versusbrother conflict floated through years of comics, with other superheroes—including Batman, the Teen Titans, and Superman—netted into the villain's plans. Ocean Master traded technology for sorcery in the four-issue miniseries Aquaman vol. 2 (1986), using the Twelve Crystals of the Zodiac in his brotherly war, but he apparently perished in the conflict. DC's history-heavy miniseries The Atlantis Chronicles (1990) altered the Aquaman legend. In the revised continuity, ancient prophecy foretold of two brothers' struggle for the Atlantean throne. Ocean Master was revived by the demon Neron in the crossover Underworld Unleashed (1995) and equipped with a magical trident and the natural ability to breathe water. Orm remains Aquaman's half-brother, the illegitimate offspring of the mage Atlan and an unnamed mother, but the siblings' relationship and destiny only became known to them over time. Ocean Master has also plagued the surface-dwelling world as one of Lex Luthor's insidious Injustice Gang. Orm temporarily succeeded in usurping his half-brother's crown by magically supplanting Aquaman's life with his own in Aquaman vol. 4 #26–#27 (2005). After restoring order Aquaman admonished his wayward brother: “Maybe if you knew anything about being a ruler, you still would.” Ocean Master's rage always sinks his plans to dethrone Aquaman, yet that same rage will always compel him to try. Orm—not called the Ocean Master— attempted to overthrow Aquaman's Atlantean rule in the two-part “The Enemy Below” episode of the Cartoon Network's Justice League (2001–2004), with Richard Green voicing the villain.
The Supervillain Book: The Evil Side of Comics and Hollywood © 2006 Visible Ink Press®. All rights reserved.

Feedback
Flashcards & Bookmarks ?
Please log in or register to use Flashcards and Bookmarks. You can also log in with
Flashcards ?
My bookmarks ?
+ Add current page to bookmarks
Mentioned in ?
References in periodicals archive ?
"Among them are Robalo, Bayliner, Finnmaster and Ocean Master, to name a few.
Boat show aims to make Anglesey top for tourism
Patrick Wilson, who stars in 'Aquaman' as the villain Orm, aka Ocean Master, has his own action figure out.
Patrick Wilson recalls going 'hog-wild' for toys
He steps forward to lead his people and to stop his evil half-brother, the villain Ocean Master, played by Patrick Wilson, who wants to turn Earth into an underwater world.
'Aquaman' already big hit in China
Patrick Wilson will play Ocean Master, the villain, who declares war on the surface world.
Aquaman trailer: First look at Jason Momoa in action - and it was worth the wait; Director James Wan dropped the new trailer at San Diego Comic Con giving fans another look at Jason Momoa and the latest Justice League installment
Last month, (http://ibtimes.com/next-htc-u11-flagship-smartphone-will-have-bezel-less-189-display-2592888) IBT reported that the rumored HTC Ocean Master smartphone will end up being called the HTC U11 Plus when it's officially announced.
HTC Bezel-Less Smartphone To Be Announced On Nov. 2
We were driven by van to the dock where our 27-foot Ocean Master open fisherman boats were, and the captains and mates loaded all our gear and luggage.
Powerhouse Panama Pelagics: adventure of a lifetime on remote Pacific waters
He said that the Indian Embassy in the UAE is on the case now and their company's agent in the Dubai -- Ocean Master -- took care of all the paperwork and formalities.
Seven stranded seamen return home after months
Thales says the new products draw on the experience of its current Ocean Master surveillance radar series, but will add the benefits of using an AESA array.
Aircraft Supplier & MRO News - Europe
As things stand, the Eclipse would be based on an Ocean Master Marine 33 hull.
5G controls via Iridium: video footage shown in a small booth at the recent DSA defence exhibition in Kuala Lumpur in April 2008 caught the visitor's eye as it conveyed a feeling of 'deja vu'. It showed uncrewed speedboats the makes of which did not correspond to the name of the company stencilled on the booth banner
Ocean master Mark, 26, and his dad Phil, 55, have pooled their passion for all things nautical, and bought Polar Bear ( the yacht that will transport adventure seekers to wherever their heart desires.
Floating trip of a lifetime
In the meantime, SSM finalized its competition for the procurement and integration of the mission equipment onboard the nine aircraft and chose the Thales (Paris, France) proposal consisting of Ocean Master radar and Airborne Maritime Situation Control System (AMASCOS).
Turboprops in fashion in Turkish MPA competition
He then steps forward to lead his people and to stop his evil half-brother, the villain Ocean Master, played by Patrick Wilson, who wants to turn Earth into an underwater world.
Mary Poppins actor to voice key character in Aquaman