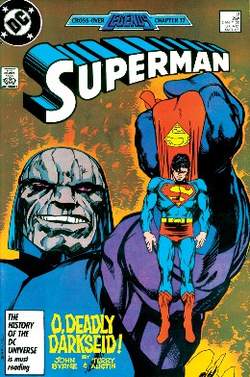 (pop culture)
Jack “King” Kirby quaked the comic-book world in 1970 when he—the co-creator of many of the superhero legends of the Marvel Universe, including the Fantastic Four, the Hulk, and the X-Men—was hired by DC Comics editorial director Carmine Infantino to do for his company what he had done for Marvel: create magic. Writer/artist/editor Kirby produced an interlocking quartet of titles (Superman's Pal Jimmy Olsen, The New Gods, The Forever People, and Mister Miracle) called his “Fourth World” saga, a grandiose tapestry of lush history and imaginative characters that was, at heart, a straightforward tale of good versus evil. And “evil,” in this case, was Darkseid, the stone-faced, impenitent despot first seen in Jimmy Olsen #134 (1970). Kirby's play on the apocalyptic Norse legend of Ragnarok, the Fourth World's fictional legend began long ago when a holocaust destroyed the “old gods.” In its wake arose two warring worlds, one light (New Genesis) and one dark (Apokolips), each occupied by a race of “new gods” divided by their opposing theologies. The hellish Apokolips, described in New Gods #1 (1971) as a “dismal, unclean place” by Orion, Darkseid's son “traded” to New Genesis for Scott (Mr. Miracle) Free in the peacekeeping “Pact,” is a bleak “armed camp” where “life is the evil here! And death, the great goal!” Darkseid is Apokolips' undisputed overlord, promising suffering to those who obey and death to those who defy. He ascended to the throne upon his decreed assassination of his mother, Queen Heggra, who was killed by his sycophantic servant Desaad. Darkseid demands not only utter obedience but godlike worship. He is absolutely contemptible and derives perverse pleasure from corrupting the weak and crushing the robust. Abetted by minions—some obsequious, some fiendish, some barbarous, but all wretched—Darkseid craves intergalactic domination, as well as the acquisition of the means to that end, the all-powerful “Anti-Life Equation.” Earth has not escaped his clutches; in his earliest appearances, Darkseid covertly networked in America through his agents, the high-tech mobsters Intergang and media mogul Morgan Edge, and over the years has made direct attempts to invade the planet. This most immoral of gods evinces infinite power, including invulnerability, superstrength, and “Omega Beams,” rays fired from his burning crimson eyes that either disintegrate beings upon contact or teleport his targets directly to him—which, in the case of the latter, portends a fate worse than death. While Darkseid demands loyalty, he rarely offers it, even to his family: in addition to ordering his mother's execution, he abused his wives Suli and Tigra, is demeaning to his boorish son Kalibak, and wars against his heroic son Orion (a third son, Grayven, is lesser known in Fourth World lore). The adversarial relationship between Darkseid and Orion is one of several aspects of Kirby's Fourth World saga that have led many to draw parallels between it and George Lucas' Star Wars mythology, which emerged in 1977; other similarities include the Death Star's resemblance to Apokolips, the Fourth World's binding energy, “the Source” (as opposed to Star Wars' “Force”), and the pronunciation of Darkseid's name: Dark-side, as in “dark side of the Force.” The Fourth World titles were canceled after nearly two years in print (although Mister Miracle ran slightly longer), leaving Kirby unable to conclude the New Genesis–versus–Apokolips/Orion–versus–- Darkseid struggle; he briefly revisited the concept in his 1985 graphic novel The Hunger Dogs. Prompted by both the appeal of Darkseid as a cosmic supervillain and numerous artists' love for Kirby's characters, DC permanently integrated the Fourth World lore into its superhero continuity after Kirby returned to Marvel in the mid-1970s. Darkseid found it advantageous to ally with the newly formed Secret Society of Super-Villains in 1976, and battled the combined Justice League and Justice Society in 1980. Darkseid's adventures have been chronicled by many popular creators including Mark Evanier, Steve Rude, John Byrne, and Walter Simonson, in various New Gods specials and revivals (an incarnation starting in 1989 introduced Darkseid's father Yuga Khan, a character later ignored). Darkseid was the principal protagonist of the 1982 Legion of Super-Heroes storyline “The Great Darkness Saga” by Paul Levitz and Keith Giffen; the 1986–1987 crossover miniseries Legends (by John Ostrander, Len Wein, and John Byrne), in which his agent Glorious Godfrey defamed Earth's superheroes; and in 1988's Cosmic Odyssey (by Jim Starlin and Mike Mignola), in which a squadron of superheroes thwarted his attempt to procure the Anti-Life Equation. In 2001's mega-event “Our Worlds at War,” he vied for a toehold on Earth while the planet was under attack by Imperiex. Many earthly superheroes have been added to his enemies' list. Darkseid's hatred of the Man of Steel rivals his disdain for Orion; in 2004 he attempted to exact revenge against Superman by controlling his Kryptonian cousin Supergirl, and he fought the Man of Tomorrow one-on-one in 2005. Darkseid's enduring stature and diabolism remain the ultimate tribute to the creative brilliance of Jack Kirby. Darkseid's villainy has not been confined to the comic-book page. The ABC cartoon The Super Powers Team: Galactic Guardians (1986–1987) brought Darkseid (voiced by Frank Welker) and many of his aides to television; a Darkseid Super Powers action figure was manufactured by Kenner in 1985 (including the “Darkseid Destroyer” toy vehicle; a 1986 Darkseid playset, the “Tower of Darkness,” never made it past the prototype stage), and Darkseid was included in spin-off Super Powers DC miniseries in 1985 and 1986 (Kirby, returning to familiar ground, illustrated the 1985 series). Michael Ironside played Darkseid in the animated Superman (1996–2000) two-parter “Apokolips … Now!,” dedicated to Jack Kirby's memory (he died in 1994), and has continued his portrayal on the Cartoon Network's Justice League (2001–2004) and Justice League Unlimited (2004–present); related action figures and other merchandise have been issued.
The Supervillain Book: The Evil Side of Comics and Hollywood © 2006 Visible Ink Press®. All rights reserved.

Feedback
Flashcards & Bookmarks ?
Please log in or register to use Flashcards and Bookmarks. You can also log in with
Flashcards ?
My bookmarks ?
+ Add current page to bookmarks
Mentioned in ?
References in periodicals archive ?
Using special lenses called "phase plates" to smooth out the intensity profiles of the OMEGA beams, the Rochester researchers reached this goal and reported a density of two to four times that of lead -- the highest fusion fuel density ever measured directly.
Math society says no to SDI funding