[′ō·pən ′rez·ən‚ād·ər]
(optics)
beam resonator
McGraw-Hill Dictionary of Scientific & Technical Terms, 6E, Copyright © 2003 by The McGraw-Hill Companies, Inc.
The following article is from The Great Soviet Encyclopedia (1979). It might be outdated or ideologically biased.

an oscillatory system formed by a set of mirrors in which weakly damped electromagnetic oscillations in the optical and superhigh-frequency (SHF) ranges can be excited and maintained, with radiation into free space. An open resonator is used as the oscillatory system, or resonator, of an optical quantum generator (laser), and also in some instruments in the millimeter and submillimeter ranges, such as the orotron.

Cavity resonators, which are widely used in the SHF range and have dimensions of the order of λ, are difficult to use for wavelengths λ < 0.1 cm because of their small size and the large energy losses at the walls. However, the use of cavity resonators with dimensions greatly exceeding λ is also impossible, since a large number of vibrational modes that are close together in frequency is excited in such a resonator. As a result, the resonance lines overlap and the resonance properties virtually disappear. However, when some of the walls of such a cavity resonator are removed, nearly all the resonator’s modes of vibration become strongly damped, and only a small portion of them (if the remaining walls are of appropriate shape) is weakly damped. As a result, the spectrum of the vibrational modes of an open resonator formed in this manner is strongly “thinned out.”

Figure 1. Distribution of the fluxes onto the surface of a rectangular mirror for the oscillations E21qx and E21qy

The first open resonators, in the form of two plane parallel mirrors, were proposed in 1958 by A. M. Prokhorov and later by the American scientists R. H. Dicke, A. L. Schawlow, and C. H. Townes. If a plane wave is assumed to propagate between two plane mirrors separated by a distance L, then a standing wave forms in the space between the mirrors as a result of reflection from them. The resonance condition has the form L = qλ/2, where q is an integer, called the longitudinal index of the oscillation. The mode frequencies of the open resonator form an arithmetic progression with the spacing c/2L (an equidistant spectrum). In reality, the edges of the mirrors distort (perturb) the field of the plane wave, leading to the appearance of oscillations with different transverse indexes m and n, which give the number of oscillations of the field in the transverse directions and the current density distribution on the surface of the mirrors (Figure 1). The larger the indexes m and n, the larger the number of oscillations and the greater their damping caused by radiation into space—that is, in essence, by diffraction at the mirror edges. The spectrum of the natural frequencies of a planar open resonator has the form shown in Figure 2. Since the attenuation factor increases with increasing transverse indexes m and n more quickly than does the frequency interval between adjacent oscillations, the resonance curves corresponding to large m and η overlap, and the corresponding oscillations do not appear. The attenuation factor caused by the radiation depends both on the indexes m and η and the number N of Fresnel zones visible on a mirror of diameter R from the center of another mirror located at a distance L, that is N = R2/2Lλ. When N ∼1, one or two oscillations accompanying the fundamental oscillation remain. 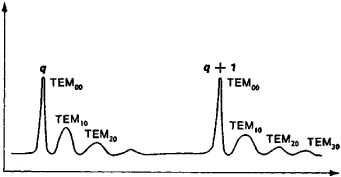 Figure 3. (a) Formation of the caustic surface in an open resonator with spherical mirrors, (b) graphic representation of the conditions for existence of caustic surfaces for different ratios of the mirror radii R1 and R2 and the distance L between mirrors: the white areas correspond to the presence of caustic surfaces, and the cross-hatched areas to strong radiation damping. The points corresponding to resonators with flat mirrors (F) and concentric mirrors (CC) lie on the boundary between the white and crosshatched areas; (C) con-focal mirror, (C’) one flat and one concave mirror (half of a confocal resonator).

Feedback
Flashcards & Bookmarks ?
Please log in or register to use Flashcards and Bookmarks. You can also log in with
Flashcards ?
My bookmarks ?
+ Add current page to bookmarks
Mentioned in ?
References in periodicals archive ?
Even if an analytical solution for the open ellipsoid (with the fields continuous at the resonator surface) does not exist, it is possible to transform the open resonator into a closed one (with ideal metallic boundaries, i.e., the electric field is zero at the resonator surface) by simply considering that the field of a WGM outside the resonator is evanescent (i.e., exponentially decaying from the resonator surface) and replacing the real spheroid with semiaxes a and b with effective semiaxes [bar.a] = a + [sigma] and b = b + [sigma], where [sigma] is the depth upon which the optical field penetrates in the surrounding medium under total internal reflection.
Analytical approximations of whispering gallery modes in anisotropic ellipsoidal resonators
Yu, "The accurate measurement of permittivity by means of an open resonator," Proc.
A new open cavity at millimeter wave band for permittivity measurement of dielectrics
The open resonator also fits the category of thin sheet tester.
Cavity techniques for substrate properties at microwave/millimeter-wave bands
The model 600T open resonator and model 200 circular cavity are used to measure [epsilon] and are tan [delta] in mm-Wave spectrum.
Sources: mm-Wave materials
For the 40 GHz data the testing was performed using an open resonator measurement technique on unmetallized samples for ease of testing, and lower frequency data was obtained on the same samples using a resonant cavity method.
CHARACTERIZATION OF LOW LOSS LTCC MATERIALS AT 40 GHz
Stephan, "Stabilization and Power Combining of Planar Microwave Oscillators with an Open Resonator," IEEE MTT-S International Microwave Symposium Digest 1987, pp.
Broadband electronically tunable IC active radiating elements and power combiners
A resonant-tunneling-diode has already been used in a quasi-optical open resonator, but that was operated at X-band.
Quasi-optical power combining of solid-state sources
2 A schematic diagram of (a) an open resonator and (b) a shorted resonator.
A dielectrometer for the measurement of substrate permittivity
For example, for a semi-confocal open resonator of length d and a two-layer sample with thicknesses [t.sub.1] and [t.sub.2] (layer 2 is against the metallic flat mirror and may represent a small air gap), poles occur at frequencies where [Mathematical Expression Omitted] is the distance between the sample surface and the spherical mirror.
Permittivity of fiber-polymer composites: a study to determine the effects of the environment
This Cavity[TM] software package performs calibration and complete instrument control of common network analyzers when used with DI open resonators. Software identifies empty cavity modes to calibrate the setup.
Open resonator software
Therefore, when electrons interact with an HF field with a small axial wavenumber (such a field can easily be excited in open resonators), all the electrons' kinetic energy may be withdrawn without significantly disturbing the cyclotron resonance.
Principles and capabilities of high-power microwave generators
Although a variety of methods are available that entail excitation or pertubation of one more modes in cavities, [sup.1-3] Gaussian beams in open resonators, [sup.4-8] and plane waves in free-space, [sup.9-11] this discussion is limited to techniques that utilize the off-resonance properties of guided waves in some enclosed transmission medium, such as coaxial transmission line or rectangular waveguide.
Extracting epsilon and mu of materials from vector reflection measurements