the general name for optical devices used for visual observation of distant objects. Spyglasses, telescopes, binoculars, periscopes, rangefinders, sights, and geodetic instruments are included in this category. Optic tubes have been known since the turn of the 17th century. A 32-power optic tube was constructed and first used for astronomical research by Galileo in 1609. An optic tube differing from the Galilean type was proposed in 1610–11 by J. Kepler (it was first constructed about 1630).

The main elements of optic tubes are the objective and the eyepiece. The objective of an optic tube is a collecting system (usually consisting of two cemented lenses, less frequently a multilens or catadioptric system). It gives a real reduced and inverted image of a distant object near its own focal plane. The image is viewed through the eyepiece as if through a magnifying glass by matching it with the focal plane of the eyepiece. In the most widely used optic tubes (the Keplerian type; see Figure l,a), the eyepiece is also a collecting system and the image produced is inverted. Astronomical and geodetic optic tubes in which the orientation of the image is not critical are constructed according to this pattern. If an erect image must be produced, an optical erecting system (a prism system in binoculars, or a lens system in old spyglasses, periscopes and, in general, systems whose length can be great) is placed between the objective and the ocular of a Keplerian optic tube. The plane of the real intermediate image created by the objective in a Keplerian tube lies between the objective and the ocular, and a measuring scale (for example, crosshairs) or a photographic plate may be placed in it. Therefore, only this type of optic tube is used for observations that require exact measurements. The eyepieces of modern Keplerian optic tubes generally have a wide field of view (up to 90°-100°); they must be corrected for astigmatism, field curvature, coma, and chromatic aberration. Therefore, such eyepieces are usually complex systems consisting of two or more lenses. Galilean optic tubes (Figure l,b) give an erect image. A diverging lens placed in front of the plane of the intermediate real image serves as its eyepiece. Such optic tubes have a small angle of vision and are now used infrequently, mainly in opera glasses. The angular optical magnification of optic tubes for ground observations is no more than several dozen, but it may be as high as 500 or more in large telescopes. The field-of-vision angle is the largest in optic tubes that have an erection system. 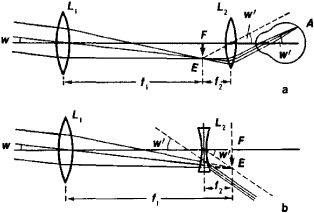 Feedback
Flashcards & Bookmarks ?
Please log in or register to use Flashcards and Bookmarks. You can also log in with
Flashcards ?
My bookmarks ?
+ Add current page to bookmarks
Mentioned in ?
References in classic literature ?
There lands the Fiend, a spot like which perhaps Astronomer in the Sun's lucent Orbe Through his glaz'd Optic Tube yet never saw.
View in context
The front ramp of the Hunter carries a red fiber optic tube. Thoughtfully, the Hunter comes supplied with five extra light tubes--two red and three green.
Game gettin' .22: Ruger's new "Hunter" MK III
At least one annulus is positioned between the outer protective tube and the fibre optic tube; and at least one path extends through the length of the fibre optic cable, providing a channel for a purge gas to flow for removing a second gas, such as hydrogen, from the fibre optic cable.
AFL wins three patents for new cable technologies
Travelling through a fibre optic tube, the laser can transmit light over long distances with very little loss of power.
Bright future for laser power; RESEARCH & DEVELOPMENT
With a new optic tube fitted on my Executive (the old one was gummed-up with sight black) I found Voigt was right.
Presidential choice. (Winning Edge)
Observers were impressed, however, by Galileo's ability to use his optic tube to read inscriptions carved on a distant building.
Reading through Galileo's Telescope. Margaret Cavendish and the Experience of Reading [*]
Other possibly useful studies are urine tests, blood work, upper endoscopy (inserting a flexible fiber optic tube into the stomach to look at its lining), and barium studies.
My stomach hurts
During the day, the reticle is illuminated by a red, GE Lexan polycarbonate fiber optic tube that wraps around the top of the ACOG in an integral reinforced channel.
The ACOG is here! Better yet, you don't have to wait for surplus to own one
Power is supplied by a modified Mini Maglite that connects to the fiber optic tube, eyepiece and light source.
HAWKEYE BORE SCOPE
Thirteen were treated with ipecac and 17 had their stomachs "pumped." After the treatment was completed the doctors performed endoscopy (insertion of a flexible fiber optic tube that allows them to see the insides of the stomach) to determine what was left in the stomach.
Stomach emptying
I pass a fibre optic tube through the nose to take a look at the back of the throat.
Tips from the top: Snoring
But today, thanks to the invention of the fibre optic tube, it can be a relatively simple procedure to "take a look" at anything from the inside of the patient's stomach to the cartilage in his knee on a colour television monitor.
Through the Keyhole