the detection, coordinate measurement, and shape identification of remote objects through the use of electromagnetic waves from the ultraviolet to the far infrared in the optical region. Optical detection and ranging makes possible great accuracy—to within a few dozen centimeters—in mapping the surface of the earth and the moon, in determining the distance to clouds, aircraft, and objects in space and above and below the surface of the water (by using the green region of the spectrum), and in investigating the distribution of inversion and aerosol layers in the atmosphere. The development of optical rangers with great range, high accuracy, and high resolution became possible in practice only with the appearance of such powerful sources of coherent radiation as optical quantum generators, or lasers.

The same principles of coordinate determination are used in optical ranging as in radar: a laser ranger irradiates an object by means of a transmitter and picks up the reflected radiation through a receiver. The electrical signal produced by the receiver contains information on the parameters of the object being detected; the characteristics of the signal are on the average proportional to the coordinates of the object. The methods of detecting objects with a laser ranger and determining the angular coordinates are basically the same as in infrared direction finding, and the methods of determining distance are the same as in radiolocation. Because of the quantum character of the interaction of laser radiation with the receiver’s detector and because of the coherence of laser radiation, the methods of signal processing used in optical detection and ranging are statistical. If a laser ranger determines only the distance to objects, it is called an electrooptical range finder.

A diagram of the structure and operation of a laser ranger designed for tracking aircraft and objects in space is given in Figure 1. A laser beam, after passing through a collimator, is directed toward the object by a mirror system. The beam, reflected from the object, is captured by a flat mirror and directed to a parabolic mirror, from which it travels simultaneously to a dissector or photosensor array for determination of the angular coordinates and to a photomultiplier or other detector for determination of the object’s distance. The electrical signals from the dissector are fed to a servo system, which controls the posi-tion of the transmitting and receiving optical systems of the ranger. 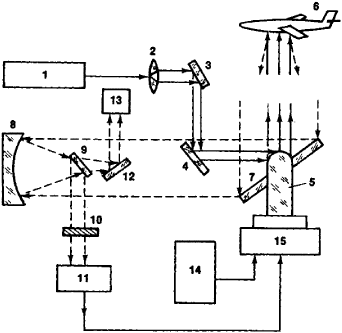 The principal advantages of optical detection and ranging systems over radar devices are greater accuracy of determination of the angular coordinates of objects from the maximum of the reflected signal and high distance resolution. For example, when a laser beam with a divergence angle of 10’ is used, the error in determination of the angular coordinates of an object is less than 1’ (as opposed to 25–30’ for radar); when the light pulse is 10 nanoseconds long, the distance resolution can reach a few centimeters. Moreover, a laser ranger has high angular resolution, that is, the capability to distinguish two neighboring equidistant objects, because of the very high directivity of the radiation. The high resolution of the laser ranger makes possible identification of the shape of objects. A serious shortcoming of laser rangers is the difficulty of using them under adverse meteorological conditions, such as rain, fog, and snow, to detect objects at great distances.