Optical systems are designed by ray tracing, and refraction at an optical surface separating two media of different refractive index is the fundamental operation in the process. The transfer between two surfaces is along a straight line if, as is usually the case, the optical media are homogeneous. The refraction of the ray at a surface results in a change in the direction of the ray. This change is governed by Snell's law.

The vast majority of optical surfaces are spherical in form. This is so primarily because spherical surfaces are much easier to generate than nonspherical, or aspheric, surfaces. Moreover, lens systems seldom need aspherics because the aberrations can be controlled by changing the shape of the component lenses without changing their function in the system, apart from modifying the aberrations. Also, many lens components can be included in a lens system in order to control the aberrations. See Lens (optics)

On the other hand, mirror systems usually require aspheric surfaces. Unlike lenses, where the shape can be changed to modify the aberrations, mirrors cannot be changed except by introducing aspheric surfaces. Mirror systems are further constrained by the fact that only a few mirrors, usually two, are used in a system because each successive mirror occludes part of the beam going to the mirror preceding it. See Mirror optics

The most common form of rotationally symmetric surface is the conic of revolution. The departure of conic surfaces from spherical form is shown in the illustration. The classical virtue of the conics of revolution for mirrors is the fact that light from a point located at one focus of the conic is perfectly imaged at the other focus. If these conic foci are located on the axis of revolution, the mirror is free of spherical aberration for such conjugate points. 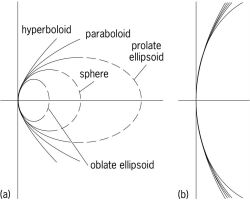 Feedback
Flashcards & Bookmarks ?
Please log in or register to use Flashcards and Bookmarks. You can also log in with
Flashcards ?
My bookmarks ?
+ Add current page to bookmarks
Mentioned in ?
References in periodicals archive ?
A current NASA project that uses the company's expertise in making precision optical surfaces involves making a 3D printed metal substrate to NASA specifications and grinding, polishing and coating the precision mirror surface.
High technology companies fervently pursue innovation
Features include: support for the Harvey-Shack and ABg scattering models, as well as a scatter evaluation tool, to simulate highly-polished surfaces; new receiver filters that track ray-surface interactions and identify contributions from ghosts and flare; the Ray Path analysis enhancements that deliver increased performance and provide detailed data to locate ghost images; options for specifying a normalised power range to filter analysis results to a subset of ray paths based on the total power collected in each path; scatter aiming enhancements that provide additional flexibility when specifying aim areas; and contamination scattering for modeling the effects of dust and other particulates that may contaminate optical surfaces, such as mirrors.
LightTools illumination design software version 8.7
In their topics, there is no single mathematical model that completely correlates the mechanical motion of optical surfaces with the amount of material removed during grinding or polishing process [7].
Experimental Optimization of Annular Polishing Parameters for Silicon Carbide
This would allow the parts to be removed, transported and handled safely through subsequent processes, without the need to touch the critical optical surfaces. The robot gripper systems were therefore designed, manufactured and integrated into the robots.
Case study: Use of injection moulding is an easy adjustment for UK spectacles manufacturer
Q: Your company Wood & Associates International will be presenting a paper at the conference titled 'UV Embossing --A New Generation of Optical Surfaces for Packaging'.
Latest in embossed fresnel lens and photopolymer unveiled in Shanghai
As shown in Figure 1, two arbitrarily shaped surfaces (having the same projected cross section along the x direction) connected by the ONM with main axis in x direction, will perform equivalently and can be treated as the equivalent optical surfaces (i.e., each point on surface [S.sub.1] will be projected to its corresponding point on surface [S.sub.2]).
Homogenous Optic-Null Medium Performs as Optical Surface Transformation
Photonic Cleaning Technologies introduces First Contact Polymer Solutions ($110), which cleans your optical surfaces without leaving residue.
Optics cleaner
Superabrasives specialist Engis, has developed a new process for polishing Laser grade-quality optical surfaces, which enables materials including: Zinc Selenide, Zinc Sulfide, Germanium, Silicon, Calcium Fluoride and Magnesium Fluoride, to be polished using exactly the same diamond slurry and composite plate combination.
Optical breakthrough
In terms of the illumination, each lens is created with 16 precision optical surfaces and 80 facets so as to spread the light evenly.
Ford 2015 F-150: beyond the aluminum: considerable care was taken in engineering the best-selling pickup so that weight is minimized and the use of recycled material is maximized, all while assuring the "Built Ford Tough" requirement