Also found in: Acronyms, Wikipedia.
The following article is from The Great Soviet Encyclopedia (1979). It might be outdated or ideologically biased.

a necessary minor component of soils, surface and subterranean waters, most rocks (particularly sedimentary rocks), and also the atmosphere (see Figure 1). Plants are the primary source for organic matter; animals account for a significantly smaller proportion. 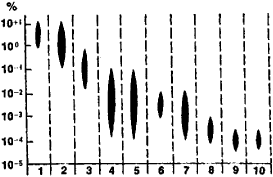 The average content of organic matter in sedimentary rocks is about 15–20 kg/m3; the total mass in the continental sector of the sedimentary crust (continents and shelves) is as high as 1016 tons. Organic matter is the source of petroleum and fuel gases.

Feedback
Flashcards & Bookmarks ?
Please log in or register to use Flashcards and Bookmarks. You can also log in with
Flashcards ?
My bookmarks ?
+ Add current page to bookmarks
Mentioned in ?
References in periodicals archive ?
Aim of this research was to determine the possibility of increasing organic matter content in humusless deposol topsoil and to form a more favourable adsorptive complex by introducing siderates, or green manure and growing siderates whose roots have beneficial effect on soil structure besides general increase of soil organic matter.
EFFECTS OF LONG-TERM FERTILIZATION ON YIELD OF SIDERATES AND ORGANIC MATTER CONTENT OF SOIL IN THE PROCESS OF RECULTIVATION
The new study submitted by Westall and her team could provide new evidence in the link between the evolution of life and the introduction of alien organic matter from space.
Evidence Of Alien Matter Found In South Africa
These mixes are made only from mineral aggregate and organic matter.
'Brew' up your own potting mix
In this third stage, all remaining organic matter is broken into humus.
The Science Of Composting
Different methods are currently applied to study carbon distribution in various organic matter pools (Blanco-Canqui and Lal, 2004).
DYNAMICS OF ORGANIC MATTER IN SOILS FOLLOWING A CHANGE IN LANDUSE ON PERMO-CARBONIFEROUS ROCKS IN THE CESKY BROD AREA (CZECH REPUBLIC)
He suspected that mycorrhizal fungi fed on decaying organic matter and served as root extensions that provided essential nutrients to plants.
Growing a Revolution: An excerpt from a book that examines the roots of the underground economy and how to improve soil health
We found significant differences (mound soil and undisturbed soil) in % water saturation, electrical conductivity (E/C), pH, organic matter, phosphorus, potassium and biomass in all types of soil.
Burrowing Activity of Rodents Alter Soil Properties: A Case Study on the Short Tailed Mole Rat (Nesokia indica) in Pothwar Plateau, Punjab, Pakistan
The soil is rich in nutrients, however, and can be a very good fertile soil with the addition of organic matter to bind the fine particles.
HEART AND; Gardeners would give the earth to have plant-friendly soil. Fret not, there are several ways you can boost yours and achieve some spectacular results
"A number of studies have shown that practices commonly used in organic farming increase soil organic matter and soil health," notes Tracy Misiewicz, associate director of Science Programs for The Organic Center.
THE "DIRT" ON GLOBAL WARMING
The treatments were distributed in randomized blocks, in a 2 x 5 x 2 factorial scheme, which corresponding to the following treatments: two irrigation depths, 50 and 100% of crop evapotranspiration (ETc); five doses of cattle manure to increase soil organic matter (SOM), from 1.8% to 2.8; 3.8; 4.8 and 5.8% (Table 1); and uncovered and covered soil (mulching) with a layer of 5 cm-thick of parsley triturated waste (Ipomoeaas arifolia) with four replicates, totalling 80 plots.
Organic fertilizer and irrigation in changes the chemical properties of a Fluvent and okra production
One of the leading roles belongs to the labile organic matter (LOM) including plant residues with varying degrees of decomposition and humification, as well as humus substances that are weakly bound to the mineral part of the soil.
Quantitative and Qualitative Composition of Soil Organic Matter in Samples of Ice Complex from Central Yakutia, Eastern Siberia
Soil organic matter is plant and animal residues either decomposed or in the process of decomposition and can be black or dark in colour.
Importance of soil organic matter in fertility maintenance and productivity under farming management system in Abakaliki, Nigeria