[ȯr¦gan·ə¦səl·fər ′käm‚pau̇nd]
(organic chemistry)
One of a group of substances which contain both carbon and sulfur.
McGraw-Hill Dictionary of Scientific & Technical Terms, 6E, Copyright © 2003 by The McGraw-Hill Companies, Inc.
The following article is from The Great Soviet Encyclopedia (1979). It might be outdated or ideologically biased.

any of a group of substances whose molecules contain a carbon-sulfur bond. There are a large number of such compounds, and the compounds are of various types; sulfur, together with hydrogen, oxygen, nitrogen, and the halogens, is one of the principal elements forming organic compounds. The sulfur atom in these compounds can be in any of its characteristic (–2, +4, +6) oxidation states.

as well as the various derivatives of these acids, and thioethers (organic sulfides, R—S—R’), disulfides and polysulfides (R—Sx—R’, where x ≥ 2), sulfonium salts (RR’S+x-, where X is an anion, such as Cl-), such sulfur-containing heterocycles as thiophene, and numerous compounds of various classes that have sulfur-containing groups, such as mercaptoamino acids.

The second type of organosulfur compound contains sulfur atoms in the +4 oxidation state and includes sulfinic acids, which have the structural formula 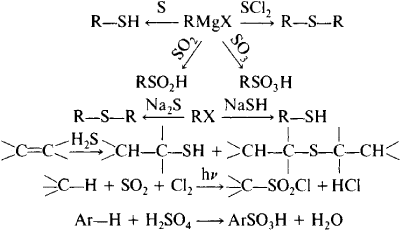 Organosulfur compounds include such important natural substances as the amino acids cystine and methionine and a series of coenzymes (coenzyme A, lipoic acid), vitamins (thiamine, biotin), and antibiotics (penicillins). The sulfhydryl groups of cystine play an important role in the active site of many enzymes. The disulfide bonds of cysteine, formed as a result of the bonding of two cysteine residues, help support the structure of proteins and peptides. Organosulfur compounds also include many medicinal and physiologically active synthetic substances, such as sulfanilamide drugs, radioprotectors (cystamine, cystaphos), insecticides, fungicides, growth stimulants, poisons (yperite), and various classes of dyes, such as sulfur dyes and certain aniline, anthraquinone, and phthalocya-nine dyes. Certain high-molecular-weight compounds, for example, polysulfide rubbers (Thiokols), may be considered organosulfur compounds. The vulcanization of rubber by sulfur (and sulfur derivatives) is based on the formation of organosulfur compounds. Organosulfur compounds are used as inhibitors of polymerization and oxidation, stabilizers of polymer materials (mercaptobenzimidazole), and solvents (tetramethy-lene sulfone, dimethyl sulfoxide). The salts of organic sulfonic acids are used as surfactants (detergents). Many organosulfur compounds, for example, aromatic sulfonic acids, are important intermediates in heavy organic synthesis.

Feedback
Flashcards & Bookmarks ?
Please log in or register to use Flashcards and Bookmarks. You can also log in with
Flashcards ?
My bookmarks ?
+ Add current page to bookmarks
Mentioned in ?
References in periodicals archive ?
According to new report available with Million Insights, Thiourea is an organosulfur compound also termed as thiocarbamide that resembles urea but contains sulfur instead of oxygen.
Thiourea Market To Generate Massive Revenue Owing To Rising Applications In Agriculture And Pharmaceutical Industry Till 2022 / Million Insights
* A case-control study found that working inside greenhouse 7, which had been fumigated with the organosulfur compound metam sodium the night of October 13, was strongly associated with illness.
Acute Metam Sodium Poisoning Caused by Occupational Exposure at a Flower Farm--Uganda, October 2016
Allicin, an organosulfur compound, which prevents lipid biosynthesis, was proved to damage Candida albicans cell wall [7] and cause inhibition of RNA synthesis in bacteria [8].
Comparison of Antimicrobial Activity of Allium sativum Cloves from China and Taskopru, Turkey
Dashwood, "Allylmercaptan, a garlic derived organosulfur compound inhibits histone deacetylase and enchances Sp3 binding on the P21WAF1," Carcinogenesis, vol.
Synthesis and Biological Evaluation of S-Substituted Perhalo-2-nitrobuta-1,3-dienes as Novel Xanthine Oxidase, Tyrosinase, Elastase, and Neuraminidase Inhibitors
The garlic compound whose antimicrobial activity is attributed to is known as allicin, an organosulfur compound from which the metabolites diallyl sulfide and diallyl disulfide are formed.
NATURAL ALTERNATIVES TO GROWTH-PROMOTING ANTIBIOTICS (GPA) IN ANIMAL PRODUCTION
Among them, DADS, an oil-soluble organosulfur compound, has been described as the major one responsible for therapeutic properties against prostate and colon in in vitro models and gastric, breast, and leukemia in in vivo models (Table 2).
Improving In Vivo Efficacy of Bioactive Molecules: An Overview of Potentially Antitumor Phytochemicals and Currently Available Lipid-Based Delivery Systems
The organosulfur compound sulforaphane (SFN) has been evaluated by A.
Antioxidant, Anti-Inflammatory, and Microbial-Modulating Activities of Nutraceuticals and Functional Foods
Allicin, an organosulfur compound which is converted from alliin by alliinase of garlic, has been shown to participate in chondrocytes proliferation [20], so we examined the effect of SAMC in chondrocytes growth.
Protective Effects of Garlic-Derived S-Allylmercaptocysteine on IL-1[beta]-Stimulated Chondrocytes by Regulation of MMPs/TIMP-1 Ratio and Type II Collagen Expression via Suppression of NF-[kappa]B Pathway
Aside from these, the leafy vegetable is also a good anti-oxidant to fight skin problems and a good cancer protection thanks to its organosulfur compound, which is said to reduce the risk of cancer.
Why wellness doesn't suck!
To identify effective adsorbents, we need to quantify the monomer properties similar to the evaluation of organosulfur compound properties.
Interaction of refractory dibenzothiophenes and polymerizable structures
DADS, an organosulfur compound up-regulate [p21.sup.[waf/dP1]] protein expression and induce apoptosis which was due to the hyperacetylation of histone H3 and H4 (Arunkumar et al.
Effect of diallyl disulfide on insulin-like growth factor signaling molecules involved in cell survival and proliferation of human prostate cancer cells in vitro and in silico approach through docking analysis
evaluated the underlying mechanism for reduced live fibrosis by diallyl trisulfide (DATS), the primary organosulfur compound in garlic.
Oxidative Stress in Liver Diseases: Pathogenesis, Prevention, and Therapeutics