rules in organic chemistry that determine the order of substitution in an aromatic ring in the presence of a substituent, or director, in the ring. In electrophilic aromatic substitution, directors of the first type (OH, OR, OCOR, SH, SR, NH2, NHR, NR2, alkyls, and halogens) direct substitution toward the ortho- and para- positions of the ring and are called ortho-, para- directors; directors of the second type (SO3H, NO2, COOH, COOR, CN, CF3, NR3, and CHO) direct toward the meta- position and are called meta- directors. Mixed orientation is observed in the case of rings with directors of less pronounced nature, such as NO, RCO, CHCl2, and CH2NO2.

The effect of the director on the electron density distribution in the transition state is even more important. The structure of the transition state is assumed to be similar to the σ-complex; it may also be represented by a set of resonance structures (see below). Ortho-, para- directors facilitate electrophilic substitution because of their inductive (+I) or mesomeric (+M) effects (the plus and minus signs designate electron-donor and electron-acceptor nature of the effect, respectively), since they stabilize the transition state, partially by extinguishing the nascent positive charge. Because of conjugation, the effect of ortho-, para- directors is most efficiently transmitted to the ortho- and para-positions of the benzene ring, and thus the attack of the electrophile E+ is directed toward these positions. Substitution at the para- position in toluene may serve as an example: 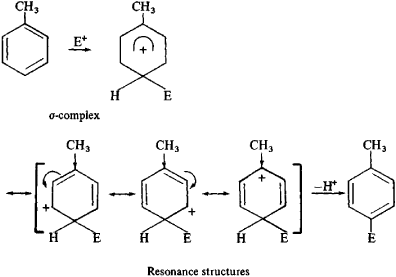 Direct interaction of the substituent with the positive charge is observed in the nascent transition state, resulting in a reduction in the energy of the transition state relative to the state in the case of meta- substitution in toluene.

The behavior of halogen directors is more complex. In this case, the —I and +M effects act in opposite directions. In the nonreacting molecule, the halogen acts as the negative end of the molecular dipole because of the —I effect. In the transition state formed in ortho- and para- substitution, the substituent is directed toward precisely these positions because of the possibility of partial extinguishing of the charge resulting from the +M effect. However, electrophilic substitution takes place less readily than in the case of benzene. For other substituents having this combination of effects—for example, for the amino group (NH2)—the +M effect overwhelms the —I effect. Protonation of the amino group in solutions leads to change in the character of the director, since the +NH3 group passivates the substitution and directs it toward the meta- position.

Meta- directors hinder the introduction of the electrophile into all the positions of the benzene ring because of the action of these same effects in the opposite direction (the—I and —M effects), but particularly—as a result of conjugation—toward the ortho- and para- positions. Therefore, in this case, substitution occurs mainly at the meta- position—as in nitrobenzene: 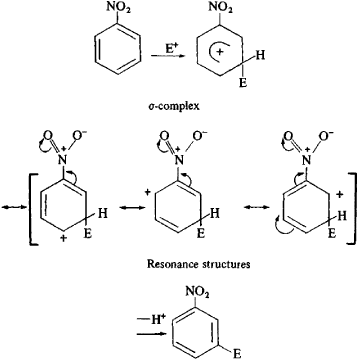 In the resultant transition state, there is no direct interaction between the substituent and the positive charge.

In cases in which there are several substituents on the benzene ring, complementary or noncomplementary orientation is possible—for example, in p- and m-nitrotoluenes.

The relative reactivity and the orientation effect, or the selectivity of the reaction, depend to a considerable extent on the nature of the electrophile. The opposite effect of the substituents examined (with respect to both activation of the substituents and orientation) can be observed in nucleophilic aromatic substitution.