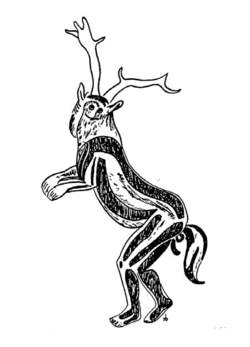 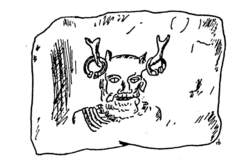 In those primitive times nature could be awesome to humankind. The sun, the roaring wind, the crackling thunder, and the flash of lightning were all things that seemed to have a power, if not a mind, of their own. Out of awe and respect came a belief in gods: a god of the wind, of the rushing river, of the mighty trees, of all things that drew respect. This was animism, the most potent factor in the evolution of religion and a belief that lingers, even today, in the islands of the South Pacific, in the bush of Australia, the jungles of Africa, and elsewhere.

Of primary concern to the early people was success in the hunt. Without meat to eat, skins for warmth, and bones and antlers for tools and weapons, a tribe could perish. When hunting, omens were sought to indicate how successful the hunt would be. Such signs and portents can multiply and become extremely complex. It seemed to those early people that there was some power controlling everything—a God of Hunting, for want of a better image. It therefore seemed logical that gaining the favor of that god would produce success in the hunting. From extant cave paintings we know that prayers, and probably rituals, were made to this hunting god, with one man acting as a priest, by playing the part of that god as he guided the others through a pantomime of the hunt to be undertaken. Since most of the animals hunted at that time were antlered or horned, it was thought the god of hunting was similarly antlered or horned. Paintings—such as the ones at the Caverne des Trois Frères in Ariège, France, and at Forneau du Diable in Dordogne, France— show an obvious human male leading a ritual dressed in the skin of an animal, and wearing the mask and horns or antlers of the beast.

Sympathetic magic was performed to aid in the success of the hunt. Again, this is known from extant artifacts (for example, at Le Tuc d'Audoubert, Ariège), such as clay models of bear and bison, pock-marked with holes where they were ritually stabbed in the mime of the hunt. Such rituals from relatively recent times include the Buffalo Dance of the Mandan Indians in the Great Plains region of the United States.

There was also a goddess, recognized by early humankind: a Goddess of Fertility, for without fertility there could be no animals to hunt. And without fertility there would be no children to swell and continue the tribe. Later, too, without fertility there would be no crops to provide food throughout the year. Early depictions of this goddess emphasized the feminine and the reproductive aspects of woman. There are many extant examples of these early "Venus" figurines (as they are termed): the Venuses of Willendorf, Lausel, Abri Patand, Sireuil, and many more. Most of them are figures with greatly exaggerated breasts, buttocks, swollen pregnant stomach, and enlarged genitalia, to underscore the fertility aspect. In a later stage of humankind's development, this Fertility Goddess became the more important of these two deities, as agriculture developed and people depended less on hunting.

So a crude form of religion came into being, made up of animism and magic, with a priesthood who served as plenipotentiary between humans and the gods. From what was essentially a polytheistic religion, the Hunting God and Fertility Goddess came to the fore in many areas to become the two major deities. With the development of agriculture and the later storage of food for the winter months, the hunting aspect fell in importance and the god became one of nature generally.

The practice of burial of the dead as innovated by the Gravettians (22,000-18,000 BCE) showed a probable belief in an afterlife, for the bodies were sprinkled with red ochre to resemble life and were buried with food and implements that might be needed in the afterworld. The God of Hunting then became also a God of Death and of the Afterlife, retaining his place opposite the Goddess.

As humankind spread from its origins in the Fertile Crescent, people brought with them these ideas of the deities, ritual, and magic. As different areas and different countries developed, the deities took on various characteristics, yet they remained essentially the same god and goddess from earliest times. The Great Mother remains recognizable, as does the Horned God. To the Celts, the god was known as Cernunnos (Latin for "the horned one"). He is found depicted on a stone altar discovered under the Cathedral of Notre Dame in Paris and on a silver Iron Age cauldron found at Gundestrup in Himmerland, Jutland. By the Bronze Age, the Horned God was found across most of Europe and in the Near and Middle East.

Throughout western Europe the people followed this pattern, worshiping these two main deities with emphasis on the Fertility Goddess when it came to crops and farm animals. By then, individuals as well as groups would worship these deities, asking for what they needed and thanking for what they received. Farmers and their families developed their own forms of magic to encourage the gods in what they wanted. Much of this was in the form of sympathetic magic, as when a farming husband and wife would have intercourse in the first furrow plowed to ensure the field would be fertile.

The "priests" of the areas still existed but as much for administering herbal medicines as for leading religious rituals. They became known as the wicca (f. wicce) or "wise ones." From this came the word "Witch" (see Wicca and Witch/Witchcraft).

Feedback
Flashcards & Bookmarks ?
Please log in or register to use Flashcards and Bookmarks. You can also log in with
Flashcards ?
My bookmarks ?
+ Add current page to bookmarks
Mentioned in ?
References in periodicals archive ?
Fels closely investigates what he considers the most influential studies of recent decades--Paul Boyer and Stephen Nissenbaum's Salem Possessed: The Social Origins of Witchcraft (1974); John Putman Demos's Entertaining Satan: Witchcraft and the Culture of Early New England (1982); Carol F.
Switching Sides: How a Generation of Historians Lost Sympathy for the Victims of the Salem Witch Hunt
Edward Burman's The Inquisition: The Hammer of Heresy took a fresh look behind the myths associated with the Inquisition whilst Pennethorne Hughes' 1952 study, Witchcraft traces the origins of witchcraft and magic.
The world of paperbacks
In Salem Possessed: The Social Origins of Witchcraft, Paul Boyer and Stephen Nissenbaum define spectral evidence as "testimony about supernatural visitations from some demonic creature ...
Conflict between state legal norms and norms underlying popular beliefs: witchcraft in Africa as a case study
Murray is a particularly interesting subject, since for many decades her theories on the nature and origins of witchcraft have been discarded by historians and folklorists alike, yet they retain a strong hold on the popular market, have influenced many novelists and film-makers, and are a "foundation myth" for Wiccans.
Scholarship and Margaret Murray: a response to Donald Frew
Paul Boyer and Stephen Nissenbaum, Salem Possessed: The Social Origins of Witchcraft (Cambridge, Mass., 1974).
Female Piety in Puritan New England: The Emergence of Religious Humanism
It it easy to give up in this often bewildering search for 'the ideological and socio-economic origins of witchcraft," he remarks, and that is, in effect, what he has done (212).
The Salem Witch Crisis
The social and economic tensions within Salem village highlighted by Paul Boyer and Stephen Nissenbaum in Salem Possessed: The Social Origins of Witchcraft (1974) receives the former treatment, as does Carol Karlsen's understanding of witchcraft as an attack on women, presented in The Devil in the Shape of a Woman: Witchcraft in Colonial New England (1987).
The Devil's Dominion: Magic and Religion in Early New England
Starkey, The Devil in Massachusetts: A Modern Inquiry into the Salem Witch Trials (1950); Chadwick Hansen, Witchcraft at Salem (1969); and Paul Boyer and Stephen Nissenbaum, Salem Possessed: The Social Origins of Witchcraft (1976).
Salem witchcraft trials