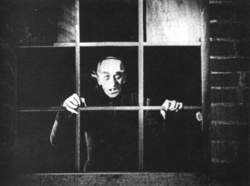 The vampire Graf (or Count) Orlock (variously spelled Orlok, Orlac, or Orloc) first appeared in the 1922 German silent film Nosferatu, Eine Symphonie des Grauens. Nosferatu was a thinly veiled adaptation of Bram Stoker‘s Dracula (1897), but Prana-Films, the film’s production company, neglected to gain permission from the author’s widow to produce the movie. Director Frederich W. Murnau, changed the title, the setting, and the names of all of the leading characters of the novel. While keeping the basic story line, he thought he had altered it enough to be protected against charges of plagiarism. Such was not the case, however, and the film had only limited screenings before legal action was taken against it and most copies were destroyed. However, enough survived to alter the image of the vampire through the twentieth century.

Although British playwright Hamilton Deane made Dracula a character that could blend into proper British society—he wore formal evening clothes and showed few effects of having experienced death—Murnau made Count Orlock a far greater object of horror. Murnau, it seemed, drew on the tradition of European folklore to create a vampire who suffered from the effects of his encounter with death. Graf Orlock was given a rodent-like appearance with two fangs placed close together in the front of his mouth rather than elongated canine teeth. He was bald and his face was distorted into a parody of humanness. His fingers were extended and given a claw-like quality—a feature that was exaggerated through the course of the movie. He moved with slow deliberate steps.

Orlock assumed several characteristics not highlighted in Dracula. Dracula had some control over animals, especially wolves and bats. Orlock also had that control, but was focused on rats; wherever he chose to go, plague bearing rats were sure to congregate. Murnau changed the setting of his movie to Bremen in 1838 (rather than the 1890s) to coincide with the outbreak of plague in that town. Another key difference was that of sunlight. Dracula, while a creature of the night, could move about in the daytime. Orlock, on the other hand, was adversely affected by sunlight and could not be exposed to it at all. Also unlike Dracula, Orlock did cast a shadow and his image was reflected in glass. Murnau developed the idea that the vampire could be most effectively attacked if a virtuous woman held him enthralled at her side until sunrise. Orlock was thus finally killed by lingering in a woman’s bedroom until the sun disintegrated him.

The Return of Orlock: Because of the lengthy legal proceedings during Florence Stoker’s life, copies of Nosferatu did not begin to circulate until the 1960s. (However, enough was known about its plot that it possibly affected the ending of Hammer Films’ first Dracula production, The Horror of Dracula (1958). (In that film, Van Helsing killed Dracula by exposing him to the morning sun by pulling the shade from a window.) The Orlock character did not make another appearance until 1979 when Nosferatu: The Vampyre, a remake of the first movie was made (Klaus Kinski assumed the title role). The new movie was written, produced, and directed by Werner Herzog. Although it kept the distinctive aspects of the original Nosferatu story line, it more clearly acknowledged its basis as a version of Dracula—in part by using the names of the characters in Stoker’s novel. Orlock did not appear again until 1991 when three different comic book companies, operating in the midst of a revival of interest in the vampire, issued comic books inspired by his character. The first of these was issued by Tome Press and was a straight adaptation of the 1922 movie. Nosferatu by Dark Horse Comics was the translation of an apocalyptic vampire tale by French writer Philippe Druillet with an Orlocklike character, but little obvious relationship to Dracula. Druillet’s work also appeared in a German translation.

The most ambitious of the three projects came from Millennium Publications, which issued a four-part series called Nosferatu. Author Mark Ellis provided a complete story of Graf Orlock’s existence quite different from the Dracula legend and brought Orlock’s menace into the present day. Graf Orlock was an eleventh-century nobleman whose estate was in the Carpathians. After Orlock became a vampire, he was eventually killed and his body sealed in the castle. An English knight returning from the crusades stopped at the castle. His squire freed Orlock, who was once again able to move about in human society. In the process the knight, William Longsword, was bitten. Following that incident, Orlock expressed his nature by causing wars and sending plagues. Longsword, who fought Orlock over the centuries, finally caught up with him in contemporary Brooklyn, where a group of plague victims had been discovered. The story led to a final conflagration, but not before Orlock passed along his undead condition. The Orlock character, like Dracula, has entered the public domain, and it would be difficult to predict where he might again arise. Sporadically, a character based on the Orlock figure will make brief cameo-like appearances in both horror and non-horror contexts.