[′ȯr·nə‚thīn ‚sī·kəl]
(biochemistry)
A sequence of cyclic reactions in which potentially toxic products of protein catabolism are converted to nontoxic urea.
McGraw-Hill Dictionary of Scientific & Technical Terms, 6E, Copyright © 2003 by The McGraw-Hill Companies, Inc.
The following article is from The Great Soviet Encyclopedia (1979). It might be outdated or ideologically biased.

(or urea-ornithine cycle), a cyclic enzymatic process consisting of consecutive transformations of the amino acid ornithine and leading to the synthesis of urea. The ornithine cycle is the most important means of assimilation of ammonia (and thus for its neutralization) in many species of animals, as well as in plants and microorganisms.

The reactions of the ornithine cycle have been most thoroughly studied in mammals (H. Krebs and K. Henseleit 1932), in which the reactions take place primarily in the liver.

The ornithine cycle consists of three main reactions: the conversion of ornithine into citrulline, the conversion of citrulline into arginine, and the splitting of arginine into urea and ornithine (see Figure 1). Reactions (I) and (II) require expenditures of energy, which is provided in the form of adenosine triphosphate (ATP). Reaction (I) proceeds in two steps: (1) the formation of carbamyl phosphate, which has an energy-rich phosphate bond, from ammonia, carbon dioxide, and two molecules of ATP (the reaction is activated by N-acetylglutamic acid; ammonia is apparently supplied to the liver in the form of glutamine, which is split by liver glutaminase into NH3 and glutamic acid); and (2) the formation of citrulline in the reaction of carbamyl phosphate with ornithine (the reaction proceeds using the energy of the carbamyl phosphate bond). Reaction (II) also has two stages: (1) the reaction of citrulline with aspartic acid to form arginosuccinic acid (the reaction proceeds with the participation of ATP, with the liberation of adenylic acid [adenosine monophosphate, or AMP] and pyrophosphate, H4P2O7); and (2) the splitting of arginosuccinic acid to yield arginine and fumaric acid. In reaction (III), arginine is hydrolyzed to urea and ornithine, which reenters the cycle. 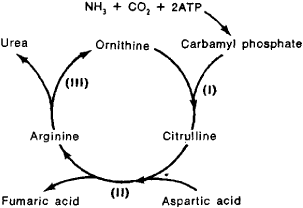 The ornithine cycle has been found in mammals, frogs, turtles, and earthworms but is absent in snakes, birds, and probably bony fishes (the cycle functions in sharks). In plants and microorganisms, the ornithine cycle is an important method of binding ammonium salts and converting the salts into organic nitrogen compounds.