(from the Russian words for “open” and “resonator,” plus the suffix -tron), an electronic vacuum device in which electromagnetic waves are excited as a result of interaction between an electron beam and the periodic structure of an open resonator. Orotrons are used as generators of millimeter and submillimeter waves, mainly in radio spectroscopy, for physical and biological research.

The orotron was proposed in 1965 by the Soviet physicists F. S. Rusin and G. D. Bogomlov. It consists of an open resonator (Figure 1), one of whose mirrors has a periodic structure. The electron flux is located in a focusing magnetic field directed parallel to the motion of the electrons. The length X of the generated waves is determined by the velocity v of the electrons, by the period d of the structure (λ = d.v/c, where c is the velocity of light), and by the distance a between the mirrors of the resonator (λ ≈ 2a/m, where m is the number of half-waves that fit between the mirrors). 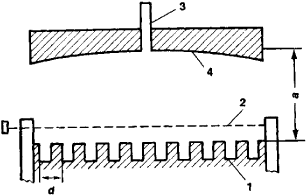 The output of electromagnetic waves from an orotron is accomplished through a radio wave guide or by direct radiation into free space. In the latter case the mirror opposite the mirror with periodic structure must be slightly transparent to the generated waves. Frequency retuning is done in a band that is greater than an octave, either continuously (by a simultaneous change in voltage, which accelerates the electrons, and movement of one of the mirrors, thus changing the distance a) or in discrete steps (by changing m). An orotron generates waves with high frequency stability (the output power is about 10 watts at an efficiency of about 1 percent).

Feedback
Flashcards & Bookmarks ?
Please log in or register to use Flashcards and Bookmarks. You can also log in with
Flashcards ?
My bookmarks ?
+ Add current page to bookmarks
Mentioned in ?
References in periodicals archive ?
Microwave tubes based on this kind of radiation, including TWTs, BWOs, orotrons and others, are often termed Cherenkov devices.
Principles and capabilities of high-power microwave generators