[′äs·ə·lə‚tȯr·ē ′sər·kət]
(electricity)
Circuit containing inductance or capacitance, or both, and resistance, connected so that a voltage impulse will produce an output current which periodically reverses or oscillates.
McGraw-Hill Dictionary of Scientific & Technical Terms, 6E, Copyright © 2003 by The McGraw-Hill Companies, Inc.
The following article is from The Great Soviet Encyclopedia (1979). It might be outdated or ideologically biased.

an electric circuit, containing an inductance coil and a capacitor, in which electric oscillations may be excited (Figure 1).

However, in real oscillatory circuits some energy is lost. The energy is expended on heating the conductors of the coil, which have an effective resistance, and also on radiation of electromagnetic waves into the surrounding space or as a loss in dielectrics. Attenuation of oscillations occurs as a result of the losses. The amplitude of oscillations gradually decreases, so that the voltage at the capacitor plates now varies according to the formula V = V0eδt cos ωt where the coefficient δ = R/2L is the attenuation factor (or coefficient) and

is the frequency of the damped oscillations. Thus, the losses cause changes not only in the amplitude of oscillations but also in their period T = 2π/ω). The quality of an oscillatory circuit is usually described by its quality factor,

Figure 2. Oscillatory circuit with a source of alternating emf U U0 cosΩt

To increase the selectivity of an oscillatory circuit it is necessary to increase Q. However, an increase of the quality factor is accompanied by an increase in the transition time required to establish steady-state oscillations in the circuit. In a circuit with a high quality factor changes in the amplitude of oscillation cannot keep up with the rapid changes in the amplitude of the external emf. In an oscillatory circuit the requirement for high selectivity is not compatible with the requirement for transmission of rapidly changing signals. Therefore, in some applications —for example, television signal amplifiers—the quality factor of the oscillatory circuit is lowered artificially. Schemes with two or more coupled oscillatory circuits are often used. With correctly chosen coupling, such systems exhibit an almost rectangular resonance curve (the dotted line in Figure 3). 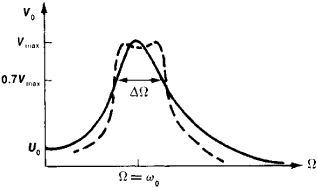 Oscillatory circuits are usually used as resonant systems for oscillators and amplifiers in the frequency range from 50 kilo-hertz to 250 megahertz. At higher frequencies sections of two-wire and coaxial lines, as well as cavity resonators, function as oscillatory circuits.